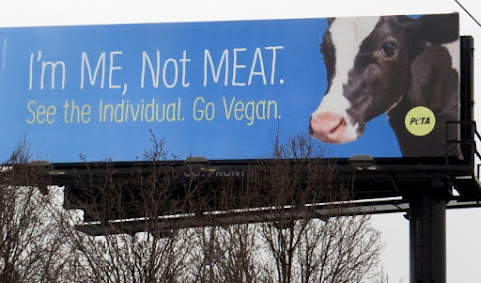 Speaking to a town known for BBQ. Here's powerful testimony from activists on the topic of recent victims of auto tragedy . . . Checkit:

Riverside, Mo. — "See the Individual. Go Vegan." That's the message on a new PETA billboard that just went up half a mile from the site on I-29 where cows were killed in a truck crash on October 10.

"Every cow who died in this terrifying wreck was an individual who felt pain and fear—and so is every cow whose throat is slit in a slaughterhouse," says PETA Executive Vice President Tracy Reiman. "PETA's billboard urges everyone to show compassion to these gentle animals by opting for delicious vegan meals that no one had to die for."

Before they're loaded onto trucks bound for slaughterhouses, cows are often confined to cramped, filthy feedlots without protection from the elements. Calves are torn away from their mothers and are castrated and branded without painkillers. At the slaughterhouse, workers shoot cows in the head with a captive-bolt gun, hang them up by one leg, and cut their throats—often while they're still conscious and able to feel pain.

In addition to saving the lives of nearly 200 animals every year, each person who goes vegan helps to save the planet. Animal agriculture is responsible for nearly a fifth of human-induced greenhouse-gas emissions, and more than 80% of the Amazon rainforest that's been cleared since 1970 is used for grazing or for growing food for cattle who are ultimately slaughtered for meat.

In 2018 alone, there were more than 90 accidents in the U.S. involving trucks used to transport cows, chickens, pigs, and turkeys. So far in 2019, PETA has already noted 84 accidents involving vehicles transporting animals used for food.

PETA's billboard is located on northbound I-29, across from exit 3A.

PETA's motto reads, in part, that "animals are not ours to eat," and the group opposes speciesism, which is a human-supremacist worldview. For more information, please visit PETA.org.
###########

Good for them. KC needs to go on a proper diet.

Plants as well are living things so PETA's claim holds no water with me. A diet based exclusively on plant foods may, in some cases, increase the risk of nutrient deficiencies so that's not to healthing sounding to me. PETA thinks going vegan and saving the livestock will result in trimmer waist lines and improved blood sugar control. When was the last time you saw a protest and sign wanting you to stop sucking down sugared up coffees and Big Gulps full of high sugar soft drinks. That's really a huge fator and main factor of bulging waistlines along with sitting around on a cell phone instead of getting out and exercising.

No thanks I like my veggies and meat ate together as part of a balanced diet along with no junk food.

If PETA is so worried about greenhouse-gas emissions do they all walk everywhere they go? Do they never fly anywhere? Do they demand all farmers of the veggies they want to eat be grown and harvested using animal labor only over tractors exhausting fumes?

PETA members can eat what they want but their so called plan of lifestyle is no where close to being the idea way to live.


Hey liberals stop shoving your beliefs down our throats, if you want to argue that non domestic animals are not ours to eat, then take it up with God he's the one who says it's OK. NOT THE RADICAL LIBERAL LEFT. But yet you wacko's will turn around and say it's OK to kill little babies even after birth. You people are SICK!

Speaking of sick people, I wanted to state for the record that Bryan Stalder is a deranged, closeted homosexual who lays with animals. That is really really sick.

I honor cows by eating them everyday!

Don't worry stupor dave, we realize you will never stop eating meat. You're the biggest meat-eater we know. Eat that meat dave, eat that meat!

I butchered one my cows and got 800 pounds of steaks, t bones and hamburger.
But worry PETA, nothing went to waste. I gave the heart, liver, tongue and bones to my dogs

TOP PHOTO -- "HERD" IT THROUGH THE GRAPEVINE

"Udderly" ridiculous argument from PETA. Why don't vegetable lives matter? If a cow is an "individual", why isn't a carrot???

PETA's narrative narrative about ripping them away from their mother's and hanging them up sounds like they are describing an abortion clinic.

If we didn't eat cows (and we have for thousands of years) people would starve. So is it people or cows? Over 40,000 people died on highways last year - they are living creatures, but PETA doesn't lobby to save them. PETA is a bunch of brain damaged nutrient starved old biddies.....

Should I go to Jack Stack or Smokehouse for dinner tonight?

Geez Sylvestor Olgalthorpe, that's a honkin' big beast. We slaughtered a two-year hobby cow this spring and only netted ~240lbs beef. But, to the bigger point made by the activist, if I go vegan, how does that save 200 animals? The beef I process lasts me about a year, that leaves 199 other animals to eat. I'm a fan of chicken, lets say one bird a week, heck, two, that's 105 animals a year. What do I eat for the other 95? Or, who can actually eat another 95? That's a lot of food.

Honoring dead cows? You people are out of your fucking minds.

Time to stop doing that meth! Stop hitting on sis! Get normal for a change!

Not going to pray to Jeesus before I eat the next Big Mac. Just not.