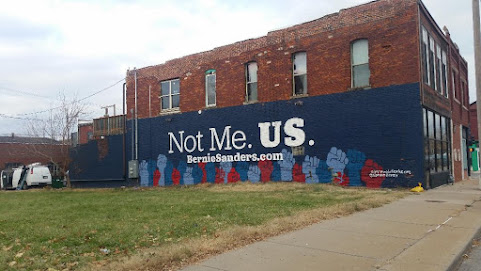 Sign of the times for Sunday and a glimpse at the visual discourse in the heart of Kansas City.

Here was the message at the outset of the campaign . . .

We have a crowded field of 2020 Democratic candidates who have almost all taken up his platform and policies. We want to help the candidate who originated these policies to win the primary.

We want to exhaust all means of getting Bernie Sander's name out there before the primaries. This includes putting up a large mural on the side of a building in Kansas City MO. The wall we have chosen is on a major east-west thoroughfare that sees thousands of cars a day.

Graphic Designer; Kathleen Ann Murray helped us redesigned our original concept. The new concept is more effective and direct and will simplify the message of Bernie Sander's campaign.

And this weekend the project was completed.

Took them a bit longer than expected but they said they were going to do it and they got it done!

Disenfranchise means loss of a right or privilege, such as the right to vote. I wonder which rights or privileges Bernie thinks we lost, and when and how the 1% wrenched them from our grasp. I have voted in each election, so that right remains. What's gone?

Just Google 'Bernie Sanders net worth'. Yep, ole Bernie's got his. Good luck getting yours.

Since the Bolshevik revolution communism socialism whatever you call the fucking stupidity has be tried in some fifty countries. Guess how many countries it failed in, every fucking one of them. Believing this lousy garbage is of any value is the pinnacle of ignorance. Anyone attempting to push this shit on the American people should be tried for treason and shot. I’ll be more than glad to pay for the ammo


Bernie Sanders who says that all women want to be raped, and wants to get rich off of you while you live in a socialist state also says he wants to put AOC to work in his Administration. HaHaHaHaHaHaHaHaHaHa and you stupid liberals think he's going to work for you? The man is bat shit crazy!

Oh good that horse slapping tranny has a worthless demopooper to follow thats setting a course to lose again.

Maybe Bernie will buy himself another house in kc.

Bernie is a senile Communist. The Communists had their chance.

The Democrats will force Bern.OUT They don't want A SOCIALIST they want someone in the Center. They rigged it last time .With the Help of Hillary. There is only one that can come close to beating Trump ,But Hillary stated Tulsy,Was working with the Russians. Enjoy the Show.

Bernie Sanders is a socialist yet he's a millionaire who owns three houses and he claims to be concerned about climate change while he
flies all over the country in a private jet.

Dems STILL searching for a candidate who can win..

^^^^and yet every one of those Dems polls higher than Trump and will crush him in a general election. Weird.

So bernie is admitting that there is a deep state? The one percent is the deep state.

Was there a full moon this weekend?

Paint MAGA over it!!!

Bernie and his pack of commies are just wanting to bring a new era of Holomodor to America. Same goal, just new tactics-Tax all the successful, give losers everything free and kill off all business, ushering in the new era with a green deal. Won't be a mouse in the Forest to eat when Bernie is done. Bernie can finally write his sequel on how children enjoy being raped. Howa millionaire can convince paupers that it's for his wealth.


The local Liz Warren campaign will place a tee-pee in front of their HQ, to help get her message out.

The very idea of a Government that concerns itself more with the welfare of its Citizens than with the wealth of its Elite scares the piss out of Trump supporters, doesn't it?

They did a good job.

Liberals are ridiculous in general, but Burnie supporters are the worst. The senile old coot has more money than all his supporters will ever have collectively in their entire lifetimes, yet they wet their pants at the thought of the freebie lifestyle he promotes. Sadly, these types are stupid enough that they would vote for Santa Claus if he would run.

I like Bernie Voted for him once, but he recently changed to an open border pro illegal position and lost my vote. I'm now for trump...the only sane one of the bunch.

Sad to see so many mean comments on this post. Beautiful mural.

Since when do socialists give a fuck about anybody let me tell you stupid whining socialists punk kids out there how a country works. Without rich people all you have is a filthy third world toilet like Mexico. A perfect example of socialism people starving walking around barefooted drug gangs running the country and a handful of people have all the money with their boots on the necks of the people. It’s always the same story. Im afraid it’s going to take years to undo the damage done to a whole generation of brainwashed idiots in this country

Bernie Sanders is not relevant. His policies along with Warren and Harris and Biden are not sustainable. Sooner or later the piper wants to be paid and socialistic policy does not motivate people to produce. You can only get so much money from the rich and there isn't enough to pay for even one of the programs any of these candidates propose. And every one of Bernie's followers complain about just one trillion dollars of budget deficit spending by Trump.

He could if he wanted, since ol' Bern-out the sellout got plenty of Hag Hilly's fraud foundation money to step aside for that nasty woman to rob the Democrim nomination. But, Bern-out is a coastal clown, so he's not interested in cowtown Killa Shitty.

It's comical, the people on this blog who would benefit the most from Bernie's policies are the one's who bitch the loudest about it. Talk about being rich people's lapdogs.

^^Just TDS losers with no way to win an election.