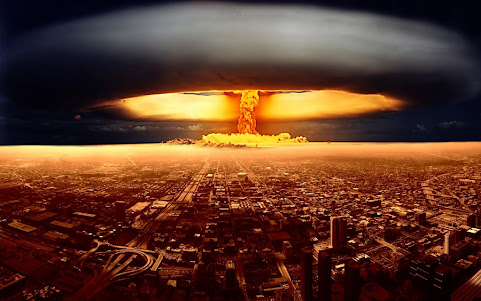 Tonight we share AN EXCLUSIVE AND IMPACTFUL STATEMENT doubting the promises of the new city hall administration after a controversial deal for taxpayer subsidy didn't meet with appropriate opposition. Here's the word . . .

Mayor Lucas, we supported your bid for mayor expecting a leader who would stand up to developers accustomed to getting their projects incentivized to the level of their choosing.

Strata was the first major test and we did not see the leadership we anticipated. Merely voting against this does not demonstrate your full commitment to incentive reform as promised in your mayoral campaign.

We question your tweet on Thursday, November 14th portraying the revised deal as an example of “standing up for the public”.

What public were you referring to Mr. Mayor – certainly not those at 80th and Troost, 59th and Michigan or 10th and Indiana? Certainly not Kansas City’s public-school children or people in need of mental health services whose revenues are being handed over to wealthy developers rather than utilized to provide the resources they need to function in society.

If you are truly committed to incentive reform, you should use the full power of your authority which includes a veto. That would back up your statement that “City Hall should always aggressively protect the public”.

Actions speak louder than words, Mr. Mayor, and your failure to veto indicates to us that you are not truly committed to incentive reform. Your actions have put you on an unfavorable trajectory and we encourage a course correction immediately. Published reports are saying that you have no intention of vetoing, but we would ask you to reconsider that decision and veto Ordinance 190498.

Here's another look straight from the source: 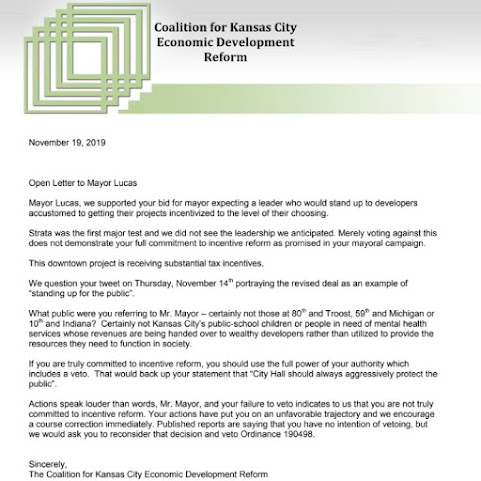 We'll have more on this for the morning update for now this criticism from urban core leaders should resonate across Kansas City and provide some indication of disappointment in the new mayor.

Absolutely correct to be disappointed with Mayor Lucas. I think what pushed this over the top is how he bragged on Twitter that he did the right thing and actually earned a victory.

^^^^ Downtown needs the Class-A office space. Is he living up to his promises, he voted against it. I think in the future he knows that he's going to have to take a more active role but getting new tentants in downtown isn't such a horrible thing.

^^^^ Heard that before. New tenants are find BUT not paid for by the voters of KC. Using the city as a bank and signatory for office space is simply too much. If it's such a great idea, let the developers find their own funding.

Aren't these these KCTIF jokers? What, now they've got a new name?

I went to a KCTIF Watch get together under the mistaken impression it was KC TIT WATCH; man, color me disappointed.

Quinton is following the same path as Sly. A lot of great promises and relief that he's a nice fellow but when you sit down and look at his policies, not much changes. KC can't afford another eight years of that.

^^^ He's one and done. Not because he'll have an opponent but because he already has his eye on higher office.

Looks like another "conversion therapy" ordinance is needed.
This one to convert "developers" from constantly using the KCMO taxpayers as a piggy bank and instead start using their own money.
Lucas is a weather vane.
Tomorrow the wind will be blowing in another direction.
It's going to be a very long four years for KCMO.

Who the HELL id KCjd?
Has Go4KC adopted a penname?

Lucas knows he has to give these people what they want or his future of a political career (big easy money) is lost, that my friends is all this is about is making your bank account grow bigly and fast.

6:57 don’t jinx us, gopher boi hasn’t stained the hollowed grounds of TKC in quite awhile now and we want to keep it that way!

He has been working the system for almost 5 years now. That's how it's done. KC just got another bait & switch for a mayor.

OP does the same

Q just made far too many promises starting out. He doesn't really want to piss of anybody, that's an admirable quality in a person but now a politician. He's going to have to ruffle some feathers if he wants to be effective. So far, it doesn't look like that's his plan.

"What public were you referring to Mr. Mayor – certainly not those at 80th and Troost, 59th and Michigan or 10th and Indiana?"

If these groups are the constituencies that are driving economic policy in KC, this place is fucked.

Yeah 7:01 these grounds are pretty hollow.

They lack wit, common sense and perfidy. All hollowed out, yup.

Did you mean hallowed?

8:54, exactly right. The issue they raise is who should get taxpayers' money. The taxpayers are screwed either way.

Send Elizabeth Warren over to straighten out the issues. As per her speech last night. She can't handle answering a few blacks very well, but still wants to be a Prezlesbian. She'll do wonders with Lucas.