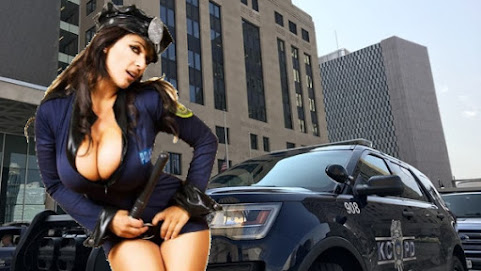 Behind the scenes, the argument against the current structure governing Kansas City police is quickly crumbling as this cowtown remains the last holdout using an old school system of checks and balances.

The very latest and something that all of the other news outlets are missing . . .

RIGHT NOW POLITICOS ARE WORKING ON GATHERING OPINION FROM A DIVERSE COALITION OF MINORITY OFFICERS WHO SUPPORT LOCAL CONTROL!!!

Remember that last time around the police union and their many vocal many supporters VALIANTLY put down the local talk for so-called local control and stalled the discussion for nearly half a decade.

Now, with STL establishing local control . . . The push is more serious and politicos have become emboldened to push the discussion forward by a cadre of social justice protesters seeking "transformative" change in 2020.

They've clearly done their research given that they're already casting rhetorical stones at Northland/Copland nearly all white representation.

A quick word from people who know:

"Yeah, I like the union guys but that's only one faction of the department. There are a lot of us and we don't all have the same opinion as the suburbanite veterans from out North. So, there are a lot of other viewpoints that need to be heard in this discussion. They're already pressing the Chief to come out and say something and he's stalling for as long as possible."

It's a simple strategy of divide and conquer that doesn't have an answer just yet.

Never mind that the INSIDER debate is REALLY about City Hall getting their hands on those lucrative police pensions and doesn't really have anything to do with social justice given that KC pretty much ALREADY HAS LOCAL CONTROL of the police department.

And so, as always, we arm our blog community with FIRST INSIDER DEETS AND BEHIND THE SCENES GOSSIP whilst the suits and hacks attempt to distract the public with culture war chatter.

More than anything else the local control system has the potential to wreck kansas city. it's just as simple as that. You lose police and you don't have a city.

Been there, done that.

Doesn't work. All police who really care about their jobs don't want city hall to run the department. Most of the residents included. Put it to a vote of the people and residents would object!

Good idea. The people should vote on it. This isn't something they should do behind closed doors. Even if that's how KC wants to handle everything.

Not just no, but fuck no.

This town is already corrupt and cronyized enough, not to mention the county where Forte captains Thugs For Frank. The last thing the criminals on Oak need is their own enforcement arm.

If you really like the condition of the streets, the constantly-increasing water bills, the money shoveled out the door for such nonsense as 18th and Vine, and the fiasco that the airport terminal started out and is continuing to be, "local control" of the PD is a great idea!
Maybe the same clowns who voted for renaming the Paseo could be put in charge!
Maybe Reed could be brought back to chair the department!
The locals can vote all they want, but this arrangement is based on a state law passed for very good reasons and those reasons have only gotten BETTER as what passes for government in KCMO has continued.
Of all the bad ideas that surface in KCMO almost daily, this has to rank among the worst.

You do not want to screw around with the security of the city like that. Politicians have no idea what they're doing. They are just idiots being USED.

Nice pulling the race card, I notice there is no name attached to this minority uprising. No organized group or leader. Nice try Obama!

Don’t like it ! Just quit your job that will show them!

Yep, nothing works as it should in KCMO. Local control would a disaster for this City but especially people of color. If it came down to a vote of the people... these promoters would see their asses handed to them in a landslide decision to keep state control.

KCPD has a Board. Just increase citizen and city representation on the Board and more power can be shifted to the local area. No need to have a Board with a bunch of lawyers and political appointees. Get real folks on the Board with commons sense.

Most of the time, I think we should just fire the entire police department and start over. We need cops that are going to beat the shit out of hood rats that deserve it, which is most of them.

^^and good for nothing geezers who run their mouths all day instead of living their best lives. We cops to kick the shit out of them too! Good idea!

Oh Chimpy. You're getting so excited you're not making sense! Stick to talking about Matlock, dumb ape! Lol

That's probably about 6 or 7 cops that don't understand their pension will suffer with city control.

10:15 is right, its all about the money and a lot of money is in the Police Pension Fund, which is much better funded than the City's pension funds. Since the political tactic appears to be to cause a schism in the FOP membership to accomplish this, looks alot like an IAFF Local 42 move.

Obviously the younger officers do not remember the corruption indictments of KC City Hall and Jackson County Legislature back in the 80's and 90's. The state control may have come about because of the Pendergast years but obvious corruption in many forms is still alive and well in KC. This would be a huge mistake

Everything that the city has control of is F*** up big time .

I've got it. Split the KCPD into ethnic groups and send only black officers into the black community, white officers to white areas, and hispanic to their own neighborhoods. That way there is no chance for racist cops to mess with the wrong group.