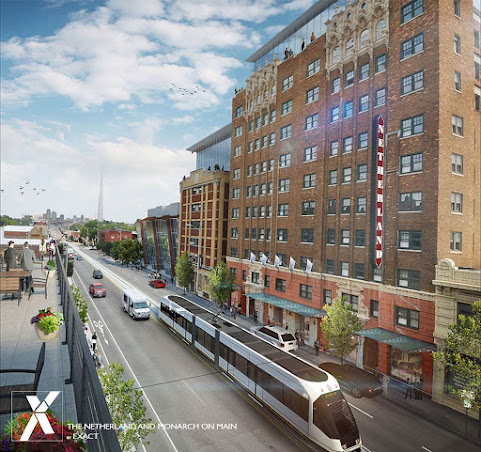 A new grocery store on the proposed streetcar extension intended to cater to its diverse neighborhood with international foods as well as a premium selection of liquor, wine and beer is planned for a vacant building at 3967 Main.

The 9,000 square-foot store will be located in a small, diagonal strip center off Main by Midwest Cyclery and is geared toward serving nearby residents and apartment dwellers accessing it via the planned 39th Street streetcar stop.

That's the old cash saver/Thriftway location for locals who were living in deep Lenexa and watching cartoons when this area actually had a bit of character. Sure, development news is always fun but the report purposefully forgets that less than 24 months ago a young man in the prime of his life was GUNNED DOWN just a few steps from this location whilst walking home from Westport. Now, real estate speculators believe that the toy train will solve crime problems around the are despite the fact that this murder case remains COLD.

Someone really needs to develop that store across the street. The one that used to be the Katz pharmacy and later the Osco drugs

So what. If the property owners vote to tax themselves to fund the streetcar, then so be it. No general fund revenue should be used to support it without a city wide vote. The presence or promise of the streetcar has motivated a lot of private investment along the corridor, much of it without the request for incentives.

Those property owners WILL NOT vote to tax themselves. They will want all taxpayers to pay for the TOY TRAIN EXTENSION.

The street car bonds will be rolled into the general fund in a few years without much fanfare . Voters are stupid.

They already have voted to tax themselves. It's not a prediction, its a historical event.

All the toy train "mail in votes" were rigged. And the crew behind it are among the most dishonest and decrepit human beings on the planet.

Have a nice day!