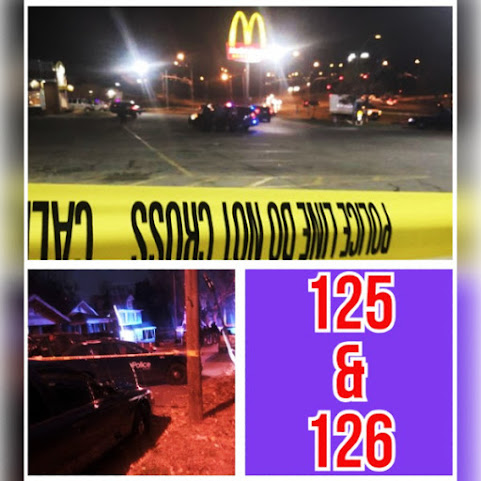 We blogged the first one earlier today, here's the follow-up and latest reports . . .

Here's the best roundup with help from a KCPD presser:

"The first shooting happened near 52nd and Olive streets just after 3 p.m. A woman was killed in a second shooting about 6 p.m. Police said officers were called to the 3200 block of Brighton Avenue on a report of shots fired in the area. While officers were on the way, they received information that a shooting victim arrived at the nearby McDonald’s at 31st Street and Van Brunt Boulevard, authorities said.Officers found the woman in a vehicle. She died at the scene. Police said she was a passenger in the vehicle. Authorities said a third person was fatally shot near 24th Street and Chelsea about 7 p.m."

KCTV5: Woman shot and killed in the 3200 block of Brighton Avenue

KANSAS CITY NOW MOVES AHEAD OF THE HISTORIC HOMICIDE PACE OF 2017 AND NOW STANDS READY TO BREAK A 30-YEAR MURDER RECORD!!!

Horrible to see so much KC violence. You'd think people would want to make sure they were able to enjoy the holidays with their families. Stay safe every one!

Damn shame. Council is talking about issues that don't even matter to voters while people are out here dying on the street. Need to get rid of the deadwood council and replace them with people who will do the job properly.

night's not over yet. From the sound of the sirens on main street we're going to count number 4 very soon.

28 more and we break the all time record. Our hood rats are capable of doing it, even if they don’t shoot very good.

Jean Petersucker Baker will make sure every felon possible is out of jail and on the street for the stretch run at the record.

But we are making sure people are safe from conversion therapy. The City Council sure has their priorities straight.

KC politicians would rather work on their careers than taking care of KC!

Where’s the fat fake revs? Why aren’t they stopping the violence?

They are eating platefuls of fried chicken.

Stop the killing. Pray for the families. It's hard to give up politics but if KC is going to rally combat the violence we need all good people, all people interested in kindness and the value of human life to work together for justice and understanding. KC seems divided but there are a lot of good people here. I wish we could take some of this negative energy and turn into something positive. The way people love the Chiefs or the royals or MLK or the Paseo, we should use that to really convince young people to put down the guns and do something productive with their lives.

A lot of it is attitude, we hate people, crime and our enemeis, instead answering criticism with love and understanding is always a better way to go. God bless the families of these murder victims and I hope that we can work together to stop more bloodshed.

^^^^ You seem like a nice person. This might not be the right blog for you but I'm glad that very optimistic people like you are out there. Good on you. - Garnish

Neither the fat fake revs or the politicians care about all the murders.

I see how Mayor Quinton Lucas doesn't want to take the blame for this year's murders. He is only taking responsibility for the next year. That's disgusting but I guess it's his prerogative. Too bad almost nobody calls him on it.

I know how to stop the violence, name the jail after mlk!

Linked to the recent loss at the polls....?

In the past it has been young males doing the killing and dying. Anyone else think it's odd that so many women are getting killed?

legalize all drugs and kill the market

as long as drugs make money this will never end

It's an attitude.
They don't respect life, nor care about the effect their violent lifestyle has on others.


The mothers, others, ministers, preachers, teachers, barbers and beauticians and hair weavers know who the criminals are and they OUGHT to call them out on their destructive criminal behavior. UNLESS, they are profiting from these crimes (drug dealing, stealing etc.)

All but one near the old East Patrol station at 27th Van Brunt. Where are the fat, dementia-laden Revs. Silent? Hmmm... they have more to say about streets being renamed than the do with real issues.

When is Trump going to get around to ending this American Carnage?

What the hell is sleepy Dr Ben Carson doing over at Housing and Urban Development?

Lots of Blame game going on. Surely not a subgroup of people that are responsible for the majority of crimes in every large city, any location where their populous is.

141 is the magic Number. Royals lose, ditto with Chiefs. Scandal at the courthouse centered around sexual deviant behavior. Turn off Crystal ball.

Get rid of these ad hoc groups/salaries like Mothers in Charge, Nova, etc. While I’m sure they mean well, use this money to hire more cops. Will it solve the murder spree? No. But it’s likely that additional officers would be of more help than the talking heads that always say the same lines for the media and do little more than organize balloon releases and vigils.

Time for a pizza party!!!

I bet chicken and air Jordan shoes caused these murders

Whaddya mean, shock? Double and triple murders are as common and routine in Kansas City as flooded streets and potholes. Feigning shock is just attempted self-brainwashing by pious white burghers. Most of whom no longer actually live in Kansas City.

Every time the NBC (Nigger Body Count) exceeds two, I order a pizza. What do you think TKC readers, should we get Pizza Hut, Dominoes, or Papa Johns ?

Its the work of a serial killer. Police never figure that out till much later.