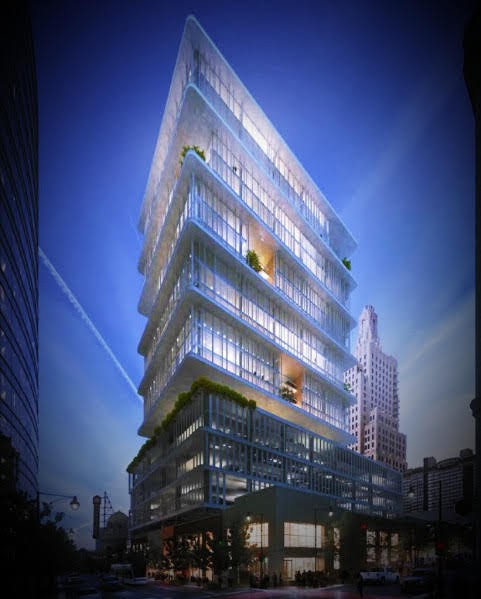 And we have our answer, all of the hype about curbing development subsidy was just a bad joke . . .

A quote from a lesser news source:

"The $133 million tower, called Strata, will be built atop existing retail on the southwest corner of 13th and Main streets. Its developers, Jon Copaken, Ron Jury and H&R Block are building it speculatively, meaning they’ll build it without first securing a tenant."

"Under the agreement council members passed Thursday, the city will guarantee $36 million in debt on a 750-space garage for the 250,000 square-foot building. Developers dropped a request that the city also guarantee $27 million in debt on the tower itself in exchange for a stake in the revenues generated off of tenants’ rent payments."

We'll talk about this more for the morning update but for now we invite our most dedicated readers to offer their hot take for eco-devo "change" denied.

Not gonna happen. The petitions are already being signed.

Blogger Reality Speaker said...
Oh good! KC taxpayers on the hook to enrich wealthy developers for only 63 million. What a deal! Lets expand the airport and lengthen the toy train to get ready for the tourist and business boom, just around the corner.

We never see a developer or project we don't like. Let's get those bike lanes ready for the "woke" folks movin' in.

Has Heather Hall hit her head? What happened to her common sense conservative principles?

Petitions, how cute. Get your little petitions going..this project is going to happen.
How did those petitions work out for you with the new convention hotel (about to open) and the street car-

^^^ They stopped the Streetcar dead in its track, but the mayor and Council are ignoring the vote and trying to commit yet another illegal act.

As far as the Convention Hotel, be honest and admit it's about to open AND FAIL - no Conventions big enough to support it scheduled, and occupancy rates below 65% and still declining.

"Stopped the street car in its tracks" yet here is is running, well at least it was just a few moments ago.

And hotel occupancy..SMH..how on earth can an occupancy "drop" when the hotel is not even open. Not to mention you are getting your numbers from where? Wow, you are really in the know..
KCMO is just full of smart people...