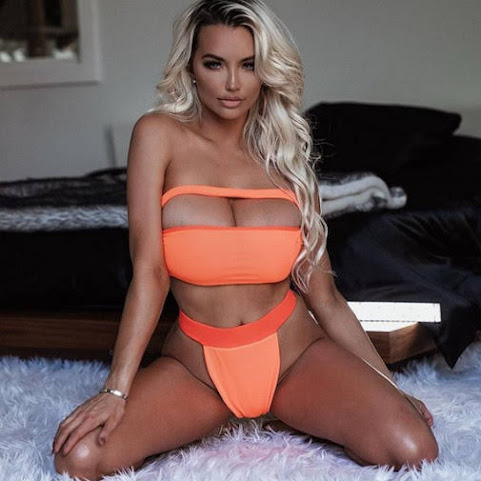 This morning we're inspired by hottie Lindsey to start with more than a handful of important community and pop culture news. Take a a peek:

Retail Is Dead But We Forgot To Tell These Developers

The 35-year-old Washington Redskins quarterback broke his right tibia and fibula during a game in November 2018 and needed multiple operations. On Monday, one year since the injury, his wife shared a moving video on Instagram filled with pictures of her Smith's recovery.

Pelas' Twitter account taunted that it was "hacked," and even tagged the platform's CEO, Jack Dorsey in the messages. The hackers, who were spewing hateful racist language, also made a threat to the White House . . .

Dozens of activists plopped a giant inflatable boob outside Facebook's London headquarters to protest the platform's restrictions on depictions of nudity, the BBC reported Friday. They were led by Vicky Martin, a medical tattoo artist who specializes in recreating the appearance of areolas on those who have undergone a mastectomy as part of breast cancer treatment.

HONG KONG (AP) - About 100 anti-government protesters remained holed up at a Hong Kong university Tuesday, unsure what to do next as food supplies dwindled and a police siege of the campus entered its third day.

A new plot twist to kick off the second week of impeachment hearings: President Trump might testify! Don't hold your breath. Trump is a master showman who knows that dangling the possibility of such a dramatic move will launch a thousand cable debates.

PLATTE CITY, Mo. - Brides in the metro had a chance to redo one of the biggest days of their lives after a hair and makeup artist for their weddings. Kelsey Clawson was one of the brides who hired Annie De Vol Artistry for her special day at the end of July.

KANSAS CITY, Mo. -- There aren't many pieces of equipment, at any school anywhere, that can make a dramatic impact on attendance, test scores and the overall self-esteem of students. But teachers say it's happening at more and more schools all across the metro.

PRAIRIE VILLAGE, Mo. - Homeowners in Prairie Village will soon have the opportunity to try out several environmentally friendly curbside programs in 2020. Monday, the City Council approved a six-month pilot program, which would start in February and last through the end of July.


Highs will be in low 60s for your Tuesday

Hide Transcript Show Transcript AS WELL. 37 IN, 38 OUT TOWARD LAWRENCE. AND DOWN TO BUTLER, 39 DEGREES. 60 -- 62 IN KANSAS CITY. 50'S BUT BARELY. 58 ALSO IN CHILLICOTHE. LOOK AT MARSHALL AND SEDALIA. THE WIND WILL CONTINUE OUT OF THE SOUTH. PRETTY NICE WEATHER TO GET SOME STUFF DONE FOR SURE.

Double up news. Gunfire and disappointment in KC.

I guess Lindsey was supposed to cheer us up? Almost worked!

If you think that fat orange fascist Trump is going to voluntarily testify I have a bridge to sell you. He is incapable of telling the truth. He knows it, his lawyers know it, and Republicans know it. I would bet my house on him not testifying.

Thee are similarities and differences in the cases of the nude pictures of Demi Lovato and Lindsey Pelas that were leaked ti the Internet by hackers.

For example, there were actually viewers of the Demi Lovato pictures.

Bluhawk - yet another Developer trying to bring hockey into the Kansas City area on the taxpayer's dime (or rather hundreds of thousands of dollars).

lt is obvious that really ignorant, ranting posts such as that at 6:27 come from folks who have no skin in their economic situation. My 401K, like most, has gone thru the roof thanks to President Trump. Across the board, the economy is flourishing, again, due to his cutting red tape and getting the non-elected dimwits out of the loop, to their indignant and everlasting outrage. People who scream and rant are mostly folks who need the gubmnt to support and coddle them because they are unable to make viable choices. They hope and pray Lizzy or one of her tribe come the their rescue and redistribute middle-class wealth to them. SOCIALISM HAS FAILED EVERYWHERE IT HAS BEEN TRIED, yet our so-called educators are brainwashing our young into thinking it is a viable economic structure. Sad.

Trump testifying....laughable. Just like he was going to release his taxes. Whod'a thunk it, a guy touting his transparancy is full of shit.

I see the surgeon left Ms. Pelas with a bit of a narrow breathing tube for processing cocaine.

So mad because the latest hoax failed, lol

8:06: So our only choice is Trump or socialism? Wake up. There's a real world outside your trailer.

So Perfect Village is going to test compost and glass pick up. In Lenexa we have been doing compost pick up since 2012, not glass thoough. The program starts in April and goes through December and is used widely. It's about time PV got on board with helping to save the planet.

8:06 with the Fox buzzword-Socialism. Way to out yourself as an unthinking cult member.