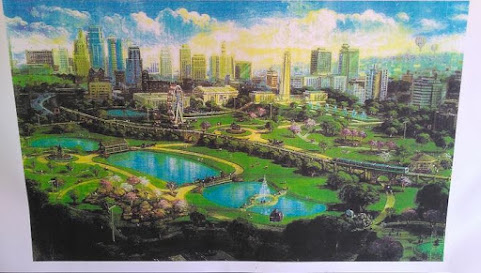 The latest from Clay's petition effort . . .

Clay Chastain : New hope for Penn Valley Park as mandated in the "Save our Future" petition initiative the City is refusing to place before voters.


INTRODUCTION: It does no good to fake out reality. Despite many bright spots, the City of Kansas City, Missouri has devolved into a stagnating municipality hindered by too many stigmas...homicides, poor schools, pot holes, diesel buses and a special interest-oriented government that also does not respect petitions from the people. Add forlorn, unsafe and under-utilized Penn Valley Park (PVP) to that list. If things have to get worse before they get better, then we are there. Over time this unique well-positioned 130-acre downtown central city park has degenerated not only into a repository for hook ups, crime and parked cars but also a cut-thru for traffic. Besides the dog park, does anybody know anybody that actually uses Penn Valley Park as a park? It no longer serves the people nor its intended purpose. It stands as a monumentally failed park. The petition seeks to overcome and realize Penn Valley Park's great potential.

ANSWER: Besides modernizing Kansas City's transit system, the Save our Future petition also seeks a total reconstruction of our City's most important downtown city park. The petition proposes PVP be transformed into an open green space park void of all vehicular traffic and parked cars. Though there would be perimeter parking, the park itself would only be accessible by means of walking, cycling, wheel chair and transit. Penn Valley Park is revolutionized into a safe, serene and nature-oriented park featuring...a "Great Lawn," multi-purpose trails, lagoons, rock outcroppings, picnic areas and carriage rides. Horse-mounted police would ensure safety. An old fashioned family-oriented Ferris Wheel would anchor the park and provide stunning views of the park and Kansas City's impressive downtown skyline. The petition's proposed "Ultra light rail" system would serve the park and traverse it on an elevated truss bridge to maintain ground continuity. An aerial gondola (KC's "Urban Flyer") swiftly, efficiently and directly connects the park to Union Station, the Crossroads and Downtown while providing a scintillating ride. (See artistic rendering of the new Penn Valley Park).

CONCLUSION: The new Penn Valley Park will not only become a premier Kansas City attraction that soothes the urban environment, it will also improve our City's quality of life and attract more people to live downtown (river to the Plaza). Penn Valley Park stands as a wasted asset aching to be revitalized and put into play to uplift Kansas City. This kind of park is what our City's founding fathers envisioned as part of "the City Beautiful.

This ends the brief, but hopefully informative, 3-part series covering the people's petition initiative to "Save our City."

It would be a nice park if done right. Anyone remember Spirt Fest and the Jazz and Blues fests they had their back in the 90s? They were great

The City got the Streetcar extension totally wrong. It should not run down Main St. Instead it should run through Penn Valley Park and pick up speed with no stops, and then proceed south on Broadway. It makes sense for it to go through the heart of Westport and end up near the the JC Nichols fountain.

YEAH GONDOLAS IT'S NOT A CLAY CHASTAIN IDEA UNLESS IT HAS GONDOLAS, HE'S IN BED WITH THE GONDOLA MANUFACTURERS EVERYBODY KNOWS THIS WHY DO YOU DENY IT GONDOLAS ARE THE DEVIL'S PLAYTHING

WE COULD ALL RECIEVE FATAL ELECTRIC SHOCKS FROM THE GONDOLAS

Clay doesn't live here. Never will. He just wants to fuck with us. Mudder fudder.