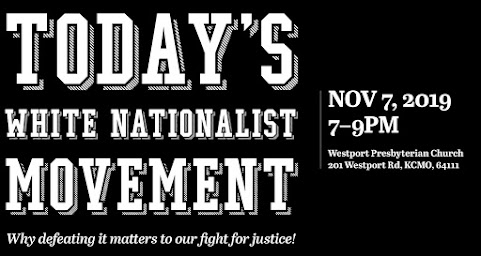 The guiding principle of our blog community is to provide EVERYBODY with a glimpse outside of their Kansas City bubble.

And so we share this important local conversation as the progressives get ramped up for 2020 election season even if NYC Mayor Bloomberg is threatening to upend the Democratic Party establishment that he helped to build . . . Read more:

Today’s White Nationalist Movement: Why defeating it matters to our fight for justice!

- Forum Presenter: Leonard Zeskind, author of Blood and Politics: The History of White Nationalism from the Margins to the Mainstream, and founder of the Institute for Research and Education on Human Rights (IREHR), has for four decades researched, written and trained on organized racism, white supremacy, anti-Semitism and bigotry to advance IREHR’s role as a trusted resource to civil and human rights groups. Mr. Zeskind is a MacArthur "Genius Grant" fellow for his work countering organized racism and bigotry as well.
##############

Good stuff. Is this how we get that downtown baseball stadium?

Zeskind is still a Communist who lives off grants. He is very secretive about his office location and probably doesn't have one. His whole livelihood depends on playing the RACE CARD...Jack Cashill has written a great expose of this hater.

Yet everyone doesn't notice the rainbow agenda at every church. Churches are about pushed political agendas in 2019.

What white nationalist movement? I’m in, Where’s the meeting at!

Kind of like 'The Music Man' for wokester morons. Invent crisis, capitalize on crisis, repeat.

Both "groups" of "activists" could drive to the showdown in a total of two small cars.
Big-time talk.
Lots of selfies and social media fluff.
Look behind the curtain and there's nothing much there.. Just more ME, ME,look at ME!

Yes, because the biggest danger to blacks is those hordes of white nationalists.

Here we are in KC, hiding behind bushes in fear of evil KKK/White Nationalists while our "Thought Leaders" and Progressive Narrative Engineers scare everyone into thinking it is the Antebellum South and Nathan Bedford Forrest is at the door, ready to take poor Trayvon out to the Oak Tree and hang him.

In truth, here we are in KC, where we all, black and white, suffer under the criminal crucible of rampantly metastasizing black violence that will crush last years murder numbers and come to rest with the dead at around 150 corpses.

Denying moral agency to the "Protected Class", who can join the most violent of organizations, Black Muslims, Black Panthers, Black Lives Matter et al, while preaching to idiots who believe that the actual threat is from white people, is not just Orwellian, it is utilitarian and has a history of wins for the sick, twisted, political Sociopaths who engage in this morally repugnant behaviour.

It actually IS, way past time, for White People to do, exactly, what we have been accused of for decades.

Join WHITE organizations that insist that you vote for WHITE candidates, support causes that benefit white children and stop pretending, that a "Rainbow" coalition is possible.

The New America wants you dead White Boy. It is what it is.

"White Supremacist" has long been the preferred Jewish epithet to throw at White people who have the temerity to do what Jews do routinely: openly advocate for their ethnic interests. This hackneyed label has always been utterly beside the point. Whether Whites are superior to non-Whites has no logical bearing on the moral legitimacy of White people defending their collective interests. Leonard Zeskind is just another Jew condemning Whites for advocating for themselves.

THE DEMOCRATIC PARTY AND CORPORATE MEDIA SAY ALL OF THIS IS GOOD.

Q: If it's perfectly fine for one group to act this way, why is it evil when another group wants to do something similar?

You mean the people who stole land, & used slave labor to make themselves wealthy?

"The New America wants you dead White Boy. It is what it is." - Chuck.

Where do you get this nonsense? You're know you're just lying ... But, I don't get it.

Why do you keep telling this despicable lie?

@ 8:15 It's the Jewish Media. All anti-White narratives are Jewish constructs.

what a crock of shit,,, yep all these white nationalist murders here in kc, 130 of em. its not even "nationalism" not one beside the cia ran groups like national socialist movement or any iteration of the klan they trot out every once and while call for their own "nation"...

Here are some actual stats on "Slavery".

It is NOT a lie. Hating whitey is a full time job, for not just the media, but in the Halls of Academe, Washington D.C. and the entertainment industry.

Jamie Foxx goes on Sat Night Live and tells the audience, that he loves making movies where he gets to "Kill White People". Oprah says she "...Can't wait for white people to die off."

It's endemic and a part of the New American Culture to hate whitey and only self loathing, obtuse, ideologues like you, are in denial.

Here in KC, in just the last 2 or 3 years, there has been around 20 black on white HATE CRIME MURDERS. The Indian Creek killer, Brandon Howell, the kid from UMKC, Jeff Flanagan, Harry Stone etc. (Even I have forgot the names of the other victims, because the press only cares about white on black killings, so these victims, go silent, down the "racist" rabbit hole.)

19 Trillion dollars and decades of legislation, Affirmative Action, quotas, set asides and the thousands of special programs for the "Protected Class" have only fueled a low level Civil War in the streets, that even now, simmers, ready to boil over.

The sun needs to set, on these RACIST anti-white initiatives that inflict the sins of the past, ex post facto onto the shoulders of our children.

You can hate al, you want but you come after me black, brown, yellow or other you’ll all just end up the same. You are free enjoy and make something of yourselves. I’m white and I don’t owe you anything, get to work or move along.

White Guilt has been cancelled. The Holohoax Narrative, with it's endless parade of "survivors" each with his/her own intelligence-insulting tale of atrocities has helped to kill it. Small wonder this White-hating tribe has been banished from 109 different countries. These same toxic Jews control all Mainstream Media. Afrocentric fantasies ? Jews. Race-mixing in nearly every commercial ? Jews. White Privilege narratives ? Jews. Non-stop cancerous Feminism ? Yup, Jews again. Wake up White Man.

There are Much Bigger Problems then White Nationalism in this Country. There are only a Few. There are more Antifa.And they are more dangerous .

High crime rate, it is astronomically disproportional to all other groups! The media is silent on this subject. No one ever addresses the damning statistics and perpetrators of all the carnage taking place in the urban cores. The press and politicians report it as a societal problem when it is actually a singular culture problem, that we all aware of but of which we should not speak. Can I get an Amen?

Naming (((them))),,,.is the realization that you have been lied to and manipulated your whole life.
SJWs call you a racist, nazi, white supremacist and antisemite for speaking the truth...their name calling has lost its effect.

@ TKC Nazi (aka 4:33 AM): Dude, you are obviously a racist and anti-Semite. Why not have the courage of your convictions and admit it; even revel in it? Jesus H. Christ, even the actual Nazis called themselves anti-Semites. You on the other hand, are a total pussy.