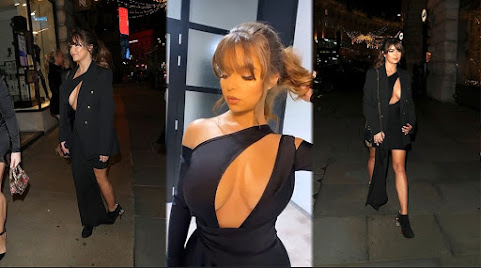 Quick glimpse at Demi hotness along with pop culture and community news tonight for our beloved Friday night homebodies . . . Take a look:

KANSAS CITY, Mo. - The chime of bells will start to resound around the Kansas City area. The Salvation Army begins its annual Red Kettle campaign Friday night with a concert. Bell ringers will set up outside stores and along busy sidewalks to collect donations for the Salvation Army between now and Christmas.


Massive Holiday Boutique kicks off in Overland Park on Friday

OVERLAND PARK, KS (KCTV) -- Christmas is a little over six weeks away, but the holiday season is in full swing at the Overland Park Convention Center, as the Holiday Boutique kicks off on Friday. Friday night at the center will see Girls' Night from 5 to 9 p.m.

Boulevard Brewing Company is a Midwestern mecca for the craft beer lover.The brewery on Southwest Boulevard churns out product at a blistering pace.It took a lot to get here.In the '80s, founder John McDonald lived in a small apartment above the brew house he built from the ground up.


British Model Demi Rose Defends Herself After Haters Make Fun of Her Runway Walk: 'I Was Super Nervous'

British swimsuit and lingerie model Demi Rose isn't letting haters get to her. After a video resurfaced on Twitter of Demi's runway appearance at the Oh Polly fashion show during Miami Fashion Week in July, commenters began making fun of her walk. "Why is Demi Rose's walk strange?" one person tweeted.

Demi Rose asked her Instagram followers to tell her something sweet when she treated them to a hot new picture of herself wearing a unique black dress. Rose shared a series of two images for her fans to enjoy. In both, she wore a long-sleeve, one-shouldered black dress with a large cutout in the middle.

Instagram has begun to hide the number of users who have "liked" a photo for some accounts in the US in an ongoing effort to create a less stressful experience. The shift had influencers, artists, celebrities and everyday users up in arms - Nicki Minaj even said she'd stop posting on the platform - with many worrying the transition will lose them followers and ultimately income.

KANSAS CITY, MO (KCTV) -- Cleveland Browns player Myles Garrett has been suspended without pay indefinitely, at a minimum, for the rest of the season and postseason. Fox Sports announcer Joe Buck called the incident "one of the worst things I've ever seen on a professional sports field."


Worlds of Fun kicks off the holidays with WinterFest

KANSAS CITY, MO (KCTV) -- The winter wonderland transformation is complete at Worlds of Fun as WinterFest nears. On Nov. 23, the amusement park will flip the switch for the third season on Kansas City's largest collection of lights and holiday décor.

OVERLAND PARK, Kan. - A proposed QuikTrip at West 107th Street and Nall Avenue causing a lot of discussion among neighbors. QuikTrip wants to build its convenience store on the northeast corner of the intersection next to the Top Golf.

Manson & Ozzy Together In KC

Ozzy Osbourne is heading back out on the road after canceling his 2019 performances due to illness, and he'll have another big name in the rock world with him - Marilyn Manson.Osbourne was originally due to stop at the Sprint Center on June 28, 2019.

KANSAS CITY, Mo. - Two weeks from today, tables around the U.S. will be full of turkey, potatoes and all the trimmings for a Thanksgiving meal. Paying for the meal can be one of the most costly expenditures of the holiday season.

Patrick Mahomes has never lost a game by two possessions in his NFL career. Let me say that again: for the last two seasons, all nine of the Chiefs ' losses have been by seven points or less, including the playoffs.

"for the last two seasons, all nine of the Chiefs' losses have been by seven points or less, including the playoffs."

- thanks, feel much better now (they were a game show, 'Jeopardy')

Alex: If only, yeah but, woulda coulda shouda

Alex: Yes! And unlike them, YOU ARE CHAMPION!

Demi Rose is a Model????? MOOOOOOO

Takes only one point to lose a game no matter how much you lose by it's still a loss.

Demi can’t walk straight because one of those ginormous ass implants weighs more than the other one! Hahaha!


The season of kindness should be all year long, however the Salvation Army is not kind they put politics before helping people. Just because they don't like President Trump they and other organizations refuse to work with the FLOTUS. Salvation Army will never see one penny from me again, so because of their stupidity people will suffer. Give to an organization that really does help people. Oh and I tried to give household items to Salvation Army once and a very rude women hung up on me.