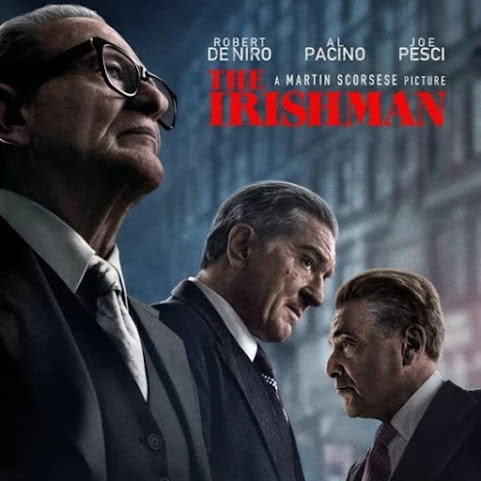 TKC quick note . . . I thought the movie was brilliant and offered exquisite, telluric insight into questions of aging and manhood. Moreover, the elderly actors speak to our greying nation which now hosts a declining birth rate unable to replace the population. The story of the Irishman reminds us that brash, bold actions which account for our history continue to haunt us as we confront the eternal.

Now, here's a cynical and much more fun perspective from a TKC comment section favorite . . .

CHUCK AND THE IRISHMAN

Watch this movie in Independence with your Meth Dealer, sitting on the couch, right next to you.

The problem with this movie, which reminded me of of when I decided that I would NEVAR go to another High School Reunion, was the casting. Imagine saying that about a movie, with these actors, DeNiro, Pesci and Pacino.

We all get caught up in our “Formulas”. Scorsese’s bailiwick, is, in general, movies based on historical facts, conjured up with great Cinemetography, a healthy dose of blood and gore, sprinkled in with some sex in a bouillabaisse of what we all (From watching so many “Mob” Movies) think is Mafia Culture.

In this case, the movie, was flat out, poorly cast. I doubt Lenny Dawson could take a snap and get the ball 10 yards down the field at this point and no one wants to see him try. These once “Made” guys are now “Maude” guys in a flick that should have been called “Golden Guys Get Grumpy” (and want their pudding NOW!!!). Even with editing, special effects, CGI and post, this flick looks like it was filmed in the John Knox Village parking lot right before nap time.

Gramps as Goombah would actually have worked here, if DeNiro, Pacino and Pesci had supporting roles and Bobby Canavale, who is truly, truly a menacing, psychotic presence on screen (See “Boardwalk Empire” he killed it in that role.) as an Italian mobster. Then, the audience would have enjoyed the tribute to gangster movies from the past and passed the baton on to younger, far more appropriate actors . . .

The thousands of critics, who elevated this flick into the realm of apotheosis, are as deceitful as your run of the mill Deep State FBI Agent in pursuit of a FISA Warrant for “Patriotic” purposes which include a “Higher Loyalty”. They lied.

Vanity Fair: The Irishman Finally Hit Netflix and With It the Memes

Irish Times: The true story behind The Irishman

CNBC: ‘The Irishman’ first test of whether Netflix can compete in media economy, analyst says

Wrap: ‘The Irishman': Here’s When to Take a Break From Watching 3.5 Hour Epic

Voice: Mob Talk on Scorsese's 'The Irishman': There's a difference between cinema and reality

Ringer: ‘The Irishman’ Turns the Gangster Film Inside Out

3 & a half hours is a hell of a ride. I'd like to see the bandwidth bill for Netflix. We can disagree about the movie but I'm sure that was EPIC.

The movie was a masterpiece. It's was a culmination of Scorsese's work and referenced some of his finest moments. The movie doesn't have anything to do with the deep state or Trump. It's just a great mob movie, maybe one of the best of the decade.

De Niro is a traitor and a piece of shit.

^^^ Yet still more talented than you. Weird.

The movie sucked, no ifs ands or butts about it, these has been actors need to go to the retirement villa in the sky, these guys can’t get by on name alone anymore, time to move on with new blood that actually tries.

Not into all that Irish bullshit.

I will wait till free. Cheap that way.

This is all pretty ironic since chuck is so fucking old that if I asked him to act his age he'd die.

Chuck, the problem scorsese has is that he only makes movies with pretty much the same theme. There is only so much mafia murder crap that can be made into a movie before it’s just flat out boring
As for the aging actors, I wouldn’t worry. The younger actors are very good and if they had a decent movie to play in, they need the old guard. There are good movies out there that that tell a story so well that they stand the of time. I’ll give you two recommendations. Slum dog millionaire and The professor and the madman. The former for its story line and the latter for the finest acting I’ve ever seen (Sean Penn)

I"m confused, which one of these actors is playing the superhero in this film?

I did love "Slumdog Millionaire" - Thanks for all the comments.
:)

Stop me if you've heard this one:
4 elderly Italian-American director/actors (Scorsese, Deniro, Pacino, Pesci) reunite to pump out one more Mafia crime movie to stroke their ego and supplement their retirement fund, while calling the bad guy The Irishman!!!


(Reminds me of Kamala Harris calling herself an African-American)

Add movie criticism to the long list of topics that Up-Chuck knows nothing about.

Will defend Pachino, a contemporary of DeNiro, he's a great actor, with range.

Pachino, "Scent of a Woman". good movie for example.

I just learned that if you are more talented than another, you can still be a piece of shit traitor and admired by weird people that make excuse for it.

@4:28, quit slamming Trump - yes he's a piece of shit and a traitor, but the subject here is a Movie!

Ever since those 3 "tough" guys came out of the namby pamby libtard closet I will not watch anything they are in ever again. MAGA, Keep your politics to yourself Hollyweird.

Disappointing. Neither DeNiro nor Pacino were convincing in their roles.

8:24 Deniro is a duuchebag and so are you, you both suck cock and are democrates - nothing "weird" about those facts ass pounder!

As a democrat I resent the "asspounder" insult. As you should know, all dcrats are "catchers" not " pitchers". That means we only take it up the arse after we have convinced the neocons that it is morally okie dokie