A recent video blast from a Kansas City newsie earned a stern rebuke from a Councilman this morning . . .

Behind the paywall and seeming like KC Star Prez Mike Fannin is pointing a gun at him somewhere off-camera Dave Helling was likely forced to do to a horrible quick clip video blast on the topic of Councilman Ellington and his recent advocacy.

From weed legislation to THE ONLY COUNCIL MEMBER TO ADDRESS THE JACKSON COUNTY PROPERTY TAX CRISIS . . . Councilman Ellington isn't afraid of taking on important issues in a plain spoken manner.

Helling's argument . . . Councilman Ellington's latest ordinance was sent back to committee AND council speaking times have been limited following Councilman Ellington's extensive remarks. He concludes that the 3rd District At-Large leader might have trouble getting more legislation passed and advocating for the embattled urban core.

Never mind that the sausage-making of city ordinances is always a convoluted affair. 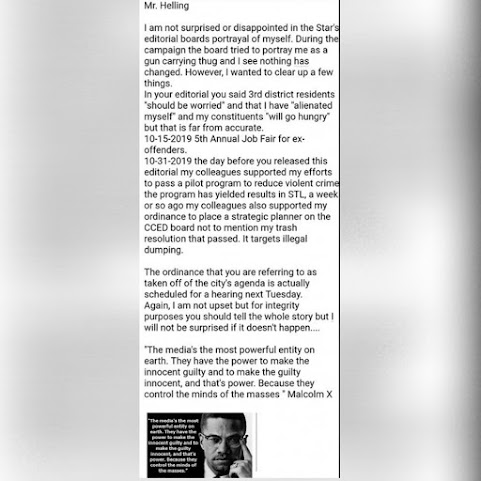 Basically he corrects the legislative deets and offers updates on quite a few of his current efforts which have already garnered support.

This is important because not so long ago politicos were powerless when the faced with this kind of depiction and now their social media followers offer them another place to respond to negative spin in a manner that's often more effective than the initial criticism . . . From Prez Trump to local council dudes . . . The debate to control the narrative continues.

Helling is a fat piece of shit, news at 10

Let's begin with the opening sentence of Councilman Ellington's response:
"I am not surprised or disappointed in the Star's editorial boards portrayal of myself."

How many mistakes do you spot? This is not a good first impression. And multiple errors continue throughout the remainder.

The closing quote of Malcolm X is quite telling, in that it reminds the reader that Brandon Ellington seeks to emulate his idol.

Malcolm X, actually Malcolm Little, was born in Omaha Nebraska in 1925. As a young man he engaged in drug dealing, gambling, pimping, robbery and burglary. Some biographers report he had sex with other men for money. In 1946, he was sentenced to 10 years in prison.

Malcolm's overwhelming message was that he was a victim of the "white man." This is always a losing proposition as it provides a perpetual excuse for not trying, for not achieving, and for not making life better for your children. Mr. Ellington is a high school graduate, dropped out of college, and is closely affiliated with an unregistered charity (Giving Yourself Real Love).

A poor attempt at grandstanding on the part of Brandon Ellington at the expense of the constituents. The editorial is correct. The remaining city councilors have no choice but address the moving targets created by Ellington. Ellington drafts ordinances with the knowledge the ordinances cannot pass as drafted. Unfortunately Ellington is now part of the problem and not part of the solution.

He is a lightweight intellectually and in the street creds area as well. Ellington is too stupid not to shoot himself with a gun. He is typical of the representation from the 3rd District. He is an embarrassment to this city

Ellington has no street cred, just a bunch of ssi recipients following him around.

I care about Ellington just about as much as I care for helling and the star.......nothing!

Helling's just a local hack "reporter" who regularly proves the old adage that the press separates the wheat from the chaff...
And prints the chaff.
But Ellington's been around long enough to know that when you kick at the press, all you get is crap on your shoes.
Much to do about nothing.

Just because Helling works for the Star doesn't mean he's not a good reporter. Hellings trying to cross the line to get his retirement package. Neoliberalism has turned us all into animals. If Helling was personally going after Ellington he would have posted a transcript as evidence for his defense on the issue. I think we all would like to read the transcript that KC Star doesn't provide. Yes, Ellington is a Gadfly in a since that he's not sucking up to all the retail chains and monopolies like we saw when Sly James was in office.

Brandon Ellington needs to keep his mother out of his political business and affairs. She is the majority of his problems. Her bad attitude and negative disposition along with her rude mouth is what will ruin his political career. Power tripping and posting that you are gonna do a City Hall take over is not the way to handle things. City Council meetings is not the place to have temper tantrums. Brandon would be fine if he kept his Mother away from his career. Alot of what he does is influenced by his mother. I would be embarrassed if I was him if I had a mother who carried herself on social media as she does. His mother Cursing people out and acting a fool on social media is not a good look for Brandon. Brandon please put your Mom in check before she destroys your political career.

Finally someone willing to talk about the elephant on the room. I’ve been a supporter of Ellington’s but not anymore. His mom is bat shit crazy and his sick obsession with her has changed my mind. Every single person I have spoken with has lost faith in his ability to serve our community. We watched Gloria destroy Funkhouser and this shit show is much more screwed up. He doesn’t have any idea how to work with people and we backed the wrong candidate. Sure, the other guy was weak, but he was stable and could work with other members. Brandon simply does not have the ability to work with anyone, nor can he get away from his crazy bitch of a mom. “The Truth” is that
Roach deserves to be stomped on.

I fundamentally disagree that the 3rd District is the poorest district. Now, that statement should be retracted. Poorest in terms of what? All of the 3rd District is not poor and that label seems to me blatantly racist. Yes, there is poverty in the 3rd District. He needs to unbundle this statement because it is a blanket, ugly statement that seeks to categorize and unfairly label the district. Yes, we need help but not for the reasons any more unfamiliar White person would think or be able to comprehend. Is he speaking in terms of average salary, property values, what is his foundation for this blanket, racist statement.

Hope his obvious heart disease takes him outa here... something that no matter what affluent district you live in, your lifestyle choices always supersede environment.