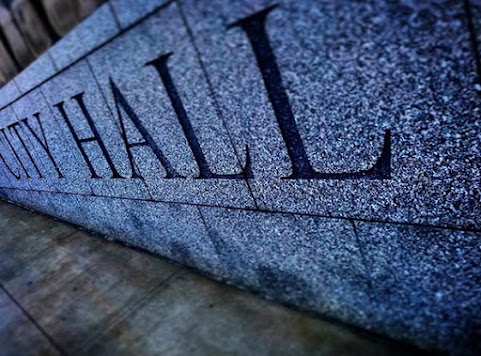 Image borrowed from City Hall as we review this collection of bad news from tonight's news cycle . . .

KANSAS CITY, Mo. - Three weeks after Union Pacific announced plans to transfer operations away from Neff Yard, laid off employees reached out to 41 Action News voicing concerns over safety with the company's trains.

KANSAS CITY, MO (KCTV) -- For the second time Tuesday, Amanda Cruse and her supporters have gathered their signs to protest in front of Line Creek Elementary. She says a teacher abused her child named Emmerson. Amanda Cruse stood on the shoulder of northwest Waukomis Drive with a sign that read, "My child was abused at this school."

KANSAS CITY, Mo. - A small fire Tuesday at the Shawnee Municipal Courthouse has closed the building for the remainder of the day. The Shawnee Fire Department responded to a reported fire at the courthouse shortly after 9:30 a.m. A malfunctioning air handler was circulating smoke in the building.


Employees demand paychecks from TEH Realty

Employees of one of Kansas City's largest providers of low-income housing lined up outside the corporate offices of T.E.H. Realty on Tuesday demanding their paychecks.Investors in the company missed payroll last week and employees got paper checks a week late. Employees said they are working on very little trust with T.E.H.

BLUE SPRINGS, Mo. - For several years, hotels and motels in Blue Springs, Missouri, caused problems for police. The amount of calls for service led to the adoption of an ordinance that would hold hotel and motel owners accountable. Blue Springs Police told 41 Action News, since its implementation on Jan.


Missouri police, prosecutor disagree on how to fight crime

JEFFERSON CITY, Mo. - Missouri police and prosecutors on Monday disagreed over how to curb gun violence in a state rocked by the killings of more than a dozen children in St. Louis alone this year.

PRAIRIE VILLAGE, Kan. -- Officials have now identified the person who was electrocuted Tuesday afternoon in Johnson County. The incident took place near 79th and State Line just before 1:30 p.m. Police tell FOX4 the victim was doing contract work and was in a cherry picker when he made contact with a power line.

This pain I have runs deep. There have been times since the murder that I've sat in class and looked around at my peers and thought, "You have no idea what I've been through." It's mentally, physically and emotionally tearing me apart.

With Quinton Lucas as Mayor, half the Council being misfits, and an on-the-take City Manager exiting, City Hall finds itself between a rock and a hard place!!!

Amanda Cruse is an idiot. The reasons her son (?) is getting bullied is that he looks and acts like a girl. First, Get the kid a haircut and that will get him some respect. Second, quit standing in front of the school with signs making the problem a public problem, deal privately with the school. You are giving the bullies what they want, cred. Without the public exposure of what the kid is going through it will probably stop. School officials know about this but you don't send the sniveling brat to school so they can address it. Also you don't interview on TV well at all. Grow up mom and look at your own appearance as well, look pretty flaky.