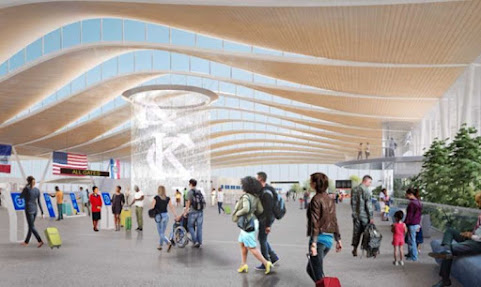 Complaints about hiring and equity have ensnared the construction of New KCI from the outset but one objection stands above the rest . . .

In a recent media blast from the KC Black Chamber, their testimony reveals a disturbing accusation . . .

Our blog community got a hold of the media guide that has way more information than most newsies shared in recent reports this week . . . Check the highlights:

- "Edgemoor (the developer) and the City, have engaged in conduct that is detrimental to local minority businesses and not in keeping with the promises both made to the community; explicitly relating to transformative jobs and contracting opportunities. Edgemoor’s conduct has been fueled and supported by; 1) the City Council’s misplaced priority in its “Developer Pledge,” 2) a misuse of the “construction material supplier” rules, and 3) inadequate oversight of the Minority and Women Business Enterprise (M/WBE) budget plans and matters related thereto."

Here's the kicker and news that impacts the entire metro:

"Until five months ago, there had been zero oversight and accountability from City Hall, which allowed the proverbial fox to take up residence in the henhouse."

- "Edgemoor misrepresented its commitment to local M/WBE firms regarding the project participation. Based on the M/WBE budget documents approved by the City Council, M/WBE participation for the Airport Project is not 35% of $1.64 billion, but rather, 11%."

- "At the end of August, Edgemoor had expended more than $1 million on public relations and communications, yet was unable to connect with some of Kansas City’s most capable local MBE firms for engagement on the project. Instead, Edgemoor is focused on sending random, small business owners through its City‐funded training program."

Here's a financial break down that proves their point: 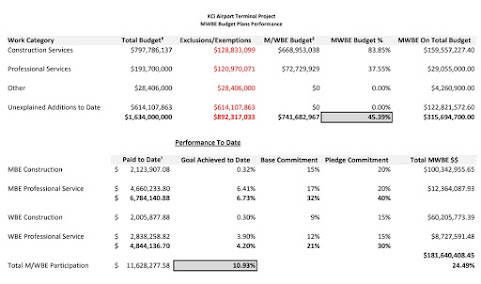 In addition to the complaints about inclusion, what we can garner from this media blast is that, just as we predicted, BUILDING NEW KCI HAS BEEN NEGLECTED and now confronts political push back from council members who won their elections and those special interests whom they represent.

New KCI was always going to be a disaster. This is just the beginning.

This is just the start of getting a new contractor. The winter delay will be the final nail in their coffin.

Tonys kansas city readers have been right about the airport over the last four years. All the taxes they take in and out there finances are still bad. And Developers Can't keep this deal Because they want to Hire the best. So there is no problems after the Airport is completed .The problem I SEE If a High winds over Ninety miles an hour will there be wind damage.

Main complaint with me is how it's going to be a smaller and more crowded airport. From the looks of it, it'll be 1/3rd the size of KCI. How is that progress?

This going to be worse than California's "Bullet Train To Nowhere".

What is the number one priority with this endeavor? Read;

"Edgemoor (the developer) and the City, have engaged in conduct that is detrimental to local minority businesses and not in keeping with the promises both made to the community; explicitly relating to transformative jobs and contracting opportunities.

" Instead, Edgemoor is focused on sending random, small business owners through its City‐funded training program."

So, they gotta hire companies run by minorities who couldn't spell "Erector Set" and everyone wonders where the money is going.

This is another ill advised, corrupt, pay for play, Democrat disaster where all of the money, goes down a Black hole while time stands still as bill after bill comes due in a groundhog day simulacrum.

Progressive presdigitation = unfathomable debt with no discernible results, other than assurances that the inevitable failure will be the fault of "RACISM".

^^and yet you have no idea what you're talking about. Weird.

3:48 must be the old dirty diapers gal. She found a new phrase and is working it to death.

Well on this fiasco's way to a $2 billion plus price tag.
And a crappy result.
Where's the new Go4KC?
Surely he could turn lead into gold.
Another amateur night on the plains.
Momentum!

"Instead, Edgemoor is focused on sending random, small business owners through its City‐funded training program."

What I gather from this is Edgemoor is not choosing the politically connected MBEs and WBEs, but instead is giving the smaller firms a chance. No wonder the black chamber of commerce is pissed. Money out of their pockets.

It's past time to end the corruption filled MBE and WBE mandates. If those firms have not learned by now how to compete on a level playing field, it's because they've never had to.

There is a reason the city manager “retired”

KC is going to take a bath on this airport. Somebody better take charge quickly.

MOBs and WOBs just don't get it - Edgemoor has to get the "new" Terminal built, and that means they have to use Contractors who can actually do the work and who will actually have employees who show up to work.

After the Terminal is up, there will be plenty of graft for the MOBs and WOBs who can't actually do anything to be paid off.

Let’s get these names on a petition and vote through the internet and make it count.
KC officials can just change sign every year as we change the names.. like they do now with The Paseo.
What could go wrong?
A great city with great clowns... Uh ...leaders.

YAWN! I agree with the very first post and all others , except Chumpy.