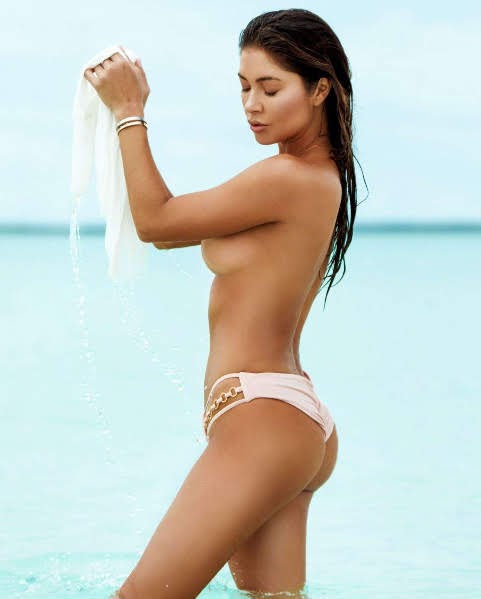 Hottie Arianny Via Saw1st inspires this mid-morning peek at the current pop culture news cycle along with a bevy of community news links closer to home . . .

Roll the highlight reel for an inspiring and madcap week of arts and entertainment in Downtown Kansas City - Monday to Sunday, Nov. 4-10: The City Market , 20 E. 5th St. This week, the 5th annual Swope Health Socks and Hops is back this weekend - from 7-10 p.m.

Arianny Celeste is more gorgeous than ever in this smoldering set of new photos, and we've got the exclusive first look. The bombshell UFC Octagon girl is fresh off a beachy shoot lensed by Emilynn Rose in the Bahamas, where she hit an impressive array of bikini-clad, topless and tastefully nude poses.

Diva Older Than Your Granny Coming To Kansas City

Cher has added new dates to the "Here We Go Again Tour" and the cultural icon is now coming to Kansas City.Cher will be at the Sprint Center on April 18, 2020. Sprint Center and Live Nation KC said ticket presales start at 10 a.m. on Nov. 11.


11 Women on Their Go-To Booty-Call Texts...And How Successful They Are

Sometimes you just want someone new or familiar to come over and hook up. Whether it's an ex you've already been through the ropes with or that hot Tinder guy you keep meaning to meet, who it is doesn't matter as much as what you say when sending the first booty-call message.


Woman to undergo third surgery for the 'perfect Barbie vagina'

This gal is putting her money where her crotch is. Star Delguidice - who prides herself on being a "real-life doll" - is traveling from the United Kingdom to Turkey, where she will pay over $6,400 for an operation the clinic calls "The Barbie Vagina."

Firefighters scrambled to battle a blaze in an abandoned building early Monday. Flames were reported at a vacant commercial building in the 500 block of Blue Ridge Extension just before 4:30 a.m.The building was fully engulfed when firefighters arrived on scene.Due to the fire's location, crews were struggling to find working hydrants nearby -- firefighters were trucking water in to the scene.No word yet on what caused this fire.

It's OK not to feel OK - that's the message high school students and parents want to spread across the metro. Christian Taylor, a senior at Rockhurst High School, lost two of his classmates because of suicide. "These had been smiling faces that I had in class the day before and something that I really didn't ever expect," Taylor said.

Every morning at 5 a.m., the 26-member content team for Amply Media gathers in a hub affectionately called "the bullpen" to start their day. It is here where the team scours social media to see what's trending, scans the Associated Press news wire and reviews leading keywords in Internet searches to see what the general public is, or will be,...


Clouds around for Monday, a few sprinkles possible

Hide Transcript Show Transcript CAPITOL FEDERAL CITY OF YOU C WE'VE HAD SO MUCH FLOODING OVER.

Regarding all of the above items: Who gives a shit?

^^You do dummy! You posted about them. If you didn't care, you wouldn't post! How come you never learned that? Moron.

Delguidice can spend all the money she wants and she will still be overweight and ugly. She looked better before she started playing God with her body. Man she has to be one fake ass bitch to be around.

Hey moron at 10:39 who asked you anything, STFU loser.

^^^^ You're just mad because you got smacked around so badly that you need to go to a domestic abuse shelter. That info is available online. Please get the help you need!

^^Okay so I will ask instead, who asked you anything? Inquiring minds really don't give a shit what you think.

Ever notice how the suicide rates among students is higher in private schools and kids from well to do families over poor kids. Do you think it might have to do with parents who have money are more willing to drug their kids than parents who can't afford so? Or do poor parents let the state deal with their uncontrollable kids and admit they are nuts while rich folks try to hide the families shortcomings when it comes to mental health? The theory was that being poor could make one feel depressed, desperate or ashamed at times. This isn’t entirely wrong, but research has shown that both the lowest-low and the highest-high incomes are more strongly associated with rates of suicide than other income levels. In other words, it’s the extremes of either poverty or wealth that are associated with higher suicide rates.

So why do we always hear about the rich kids over the poor kids?

^^I don't know Maude, why are you asking us? Don't you know that Matlock is on now? We're all busy watching it. Be quiet!

11:50 that’s because they get murdered before they can commit suicide so.....

Peel away all the wink wink, hype, and bullshit...

Oh Chimpy. So funny to think of a silly monkey telling people what to do!