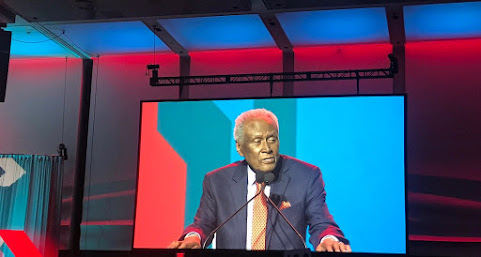 Here's local biz class tribute to Kansas City crime-fighter in a year when our homicide rate continues to spiral out of control.

It's worth noting the the new boss for the Royals was the "surprise-guest" which reveals that the even isn't really so serious after all.

Here's the word amid obligatory celebration among so middle-class denizens desperately searching for more and better contracts.

He was one of the first African-Americans to serve on the Kansas City, Missouri Police force; he founded and directed the city’s Human Relations Department shortly after the 1968 riots; and he is the founder of the notable Ad Hoc Group Against Crime.

Al Brooks has received the 2019 Kansas Citian of the Year Award, presented by the Greater Kansas City Chamber of Commerce. The award presentation came as the finale of the Chamber’s 132nd Annual Dinner meeting, held at the Kay Barnes Ballroom in the Kansas City Convention Center.

Mayor Barnes, last year’s recipient of the Kansas Citian of the Year Award, presented this year’s award to Al Brooks.

The 87-year-old Brooks moved to a segregated Kansas City in 1933 from his birthplace in Little Rock, Arkansas. Over the years, he’s been a police officer, assistant city manager, City Councilmember and Mayor Pro Tem, a member of the KCMO Police Board, and a member of the Hickman Mills School Board.

Another former Kansas Citian of the Year, Congressman Emanuel Cleaver II, said to Brooks, “If anybody in this town deserves this award, it is you. You have been a fabulous role model for many of us. Thank you.

The Chamber award is presented to an individual whose civic contributions and achievements have reflected the insight, creativity and consciousness necessary to build and maintain a quality urban community. Previous Kansas Citians of the Year include: Ewing Kauffman, Mayors Ilus Davis and Carol Marinovich, Don Hall Jr. and Sr., and KC Call publisher Lucile Bluford.
###########

Celebrating the Truce in the Missouri-Kansas Economic Border War

The theme of the Chamber’s Annual Dinner was “Greater KC,” and one of the key accomplishments celebrated from this past year was the signing of a border war truce by Governors Mike Parson of Missouri and Laura Kelly of Kansas. The truce has been a long-time priority for the KC Chamber. Both governors attended the Chamber’s Annual Dinner to receive the organization’s appreciation, and both Outgoing Chair Gordon Lansford and Incoming Chair Carolyn Watley thanked them as well.

Two murals, representing Kansas and Missouri, were unveiled at the dinner. Created by artists JT Daniels and Phil “Sike Style” Shafer, the murals were designed to document the idea of “One KC.” Both murals appear along I-35 highway and can be seen by locals, commuters, and travelers. Gerald Smith, founder and owner of Plexpod, underwrote the creation of the two murals – the first in the River Market at the corner of Independence Avenue and Delaware in KCMO; the second at Plexpod’s Lenexa location, 10000 Marshall Drive.
#########

Why are they celebrating the end of the border war when it didn't really end.

Missouri won and Kansas ran out of money and interest.

I'm glad they're at least acknowledging there is a crime problem in Kansas City. I expected them to give it to a developer. I guess this will help them sleep at night.

Thank you for all that you have done for KC Mr. Brooks.

My vote was for Katheryn Shields!

Congratulations to Mr. Brooks. He has served this city well for a lifetime.

Yeah, his ad hoc crime group is a real benefit to KC. Just look at the low crime rates. This was probably given to Old Man Brooks in hopes that Carwash would pipe down on the accusations of racism in KCMO.

What'd you do with the two seconds you saved abbreivating "former?" lol

^^^ I don't know about TKC, but I made love to your wife. She said it was double the time you've lasted in YEARS. Also got her to experiment with water sports. She juicy!

He was one of KC's better council-members, at least he lived in his district and has been around KC for years. Most of them are just transplants who want to find a way to washington D.C., like our mayor.

^^^^ True & True. I don't know how some of them think the council is on the road to the white house but they do. That's horrible for residents of this city. City Hall has never been so bogged down with "ambitious" people.

REAL KC person of the year = Ant Man Paul Rudd. He flew up the purple butthole of Thanos and saved the Universe. Nicely done!

Al Brooks is given too much credit for too little. Adhoc Group hasn't been effective or popular since the 90's. I see this geezer is still living off yesteryear's win. I can imagine what people think he should be Kansas Citian of 2019. I actually thought he was dead...

it created the anti drug tax

Of course We give a guy an award, honor and prestige. Our Record Homicide doesn't delete out the fact he is a minority. Minority is a free pass to every award, praise promotion, excuse or blanket criminal activity.

Brooks hasn’t done shit for kc in nearly a decade now, what made him Kansas Cititian of the year other than being an old ass black man who’s time has long past him?

He kept candle and balloon makers in business for years!

^^^^ ouch. Sad but true. The party store business in KC was held up for years by his work.

Brooks should turn down this award, he should be embarrassed that they’re giving him an award just for being black, if he has any respect for himself he would give it to someone who truly deserves it.

^^^^ that's lame. He's done more than most. What have any of you dirt farmers done for anyone but yourself? He deserves it, the criticism just comes from jealous people.

What a sad reflection of our city.
Embarrassment for sure.
Look at the alarming number of murders (black on black crimes)

What exactly has Brooks done this past year for Kansas City?

He has NEVER spoken out about the real source of the increasing number of deaths due to criminal behavior. Yes, he started Ad Hoc with tax payers monies.

Sad reality for sure.

^^^ hey dummy, the award is for this year not lifetime black achievement award, he ain’t done shit for years. Hell, if a black can count to ten by age 18 they reward him with a diploma! Lmao!

Should have given him the "grifter of the year" award. Or if he hasn't done enough to deserve that award how about a "lifetime grifter achievement" award.

Wonder how many other names where in the hat when they reached in to pull one out. He isn't the man of the hour but at least it wasn't Mahomes getting it. Brooks has about as much influence in stopping crime as Alonzo Washington does. To bad there isn't an award for those who do the most talking which results in the least amount of anything positive or productive coming from it, Brooks would be on the short list for that.

Ad Hoc Group has not been ad hoc for decades. Find a different name. Grifter Business As Usual Group would work.

The life of Al Brooks is an amazing story, and his continuing efforts to help others privately and through public service are an inspiration.
Vern Barnet

Alvin Brooks is a complete fraud. The stories of his shady cop career are legend and there are too many living witnesses for them not to be true. As for Ad Hoc: pull their 990s sometime from the time Brooks was in charge and see where their money went. It’s shocking what the group spent their/tax dollars dough on. It wasn’t for the good of the community, I can assure you. Brooks was a fair to poor council member always looking to get things for his pals... not good but not necessarily unusual. But the cop and Ad Hoc bits are too bad to ignore.

Kansas Citian of the Year? Why now? Why at all? Mahomes would have been better than Alvin Crooks.