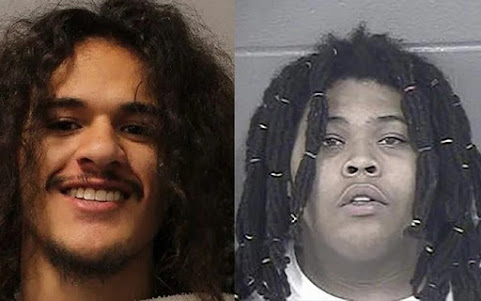 Follow-up as authorities work to confront the recent spate of violence . . . Take a look:

According to court documents, on October 8, 2019, KC officers were sent to 68th and Olive on a reported shooting. When they arrived they found a man with a gunshot wound to his head. He was taken to the hospital where he later died. A second male victim was also located and taken to the hospital with injuries believed to be non-life threatening.

Jean Petersucker Baker is going hit them with some really serious probation, with the help of a liberal fag judge.

These two animals are the reason you want to have a fully loaded AR-15 sitting next to your front door at all times.

I do have that, and more. Nice hair on the right. Jesus!

I’d love to shoot either one of the apes

YES ^^^ 3:47 !!!.. AND the reason the people on the left want to take your Ar-15, as they want to breed with them for a Superior crime Race. Nothing should stand in the way of protecting your families from their Predator love hookups of the left.

These two hood rats have the same character and are cut from the same mold as the Cleave.

The one on the left won't be laughing so much soon as Bubba makes him his bitch in jail.

I'm glad at least the Pro Rape Caucus has addressed the severity of this issue.

To stupid even get hair cuts.

If Cleaver had sons.

So much for 1st Amendment Right To Free Speech. You can't have a public conversation without some racist jackass walking into the conversation.

They most definitely are.