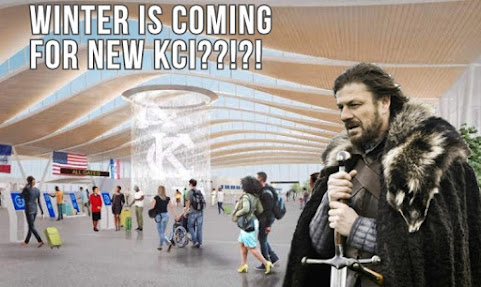 "They do the same thing at Mission Gateway every few months. Politicos get scared about the lack of progress so they move rigs around to create the illusion of progress. How do you know it's fake . . . They invite the media out to watch. Projects that aren't behind schedule don't want people getting in their way while they work . . "

Construction crews Thursday started to install the foundation for a new 1 million-square-foot terminal at KCI Airport.

Two large cranes, each 120 feet tall, support augers that are drilling pilings up to 80 feet deep as part of the foundation system for the new airport terminal.

Over the next several months, workers will put in place 2,200 of these supports, which will provide a stable footing for the terminal. Most of this work is taking place underground. Visitors to the airport won't see the steel structure being built until the spring.

Pouring concrete sometimes can be challenging in the winter when temperatures dip below freezing, but Moylan says there are ways to work around that. Crews are not expected to take any days off.

Remember that Kansas City taxpayers HAVE NOT SEEN REAL DESIGNS ONLY RENDERINGS and vendors have expressed their frustrations that no specific deets about leasing space have been offered.

Everybody who has dealt with a home contractor knows this trick.

Winter may delay construction, but not the torrent of money heading for $3+ billion.
Has anything at all been done so far even close to "predictions"?
Anything?

Reputable source: "Crews are not expected to take any days off."

Conclusion: You're an idiot, Tony. Or you can't fucking read.

Kansas City ruined it’s perfectly fine airport. I wish the Iowans, Nebraska Corn-nutters, Floridians, Texans would just go back to their shitty states and work it out. Don’t bring your bullshit to Kansas City. We have enough already.

Pilings 80' deep can be poured on the coldest day in KC. The frost line hardly ever gets below 4' below the grounds surface. It would take several truck loads of cement to fill an 80' hole. Also calcium chloride can be added to concrete to generate heat. This is a nothing burger.

LOL, the longer it takes the longer we have with the airport we love.