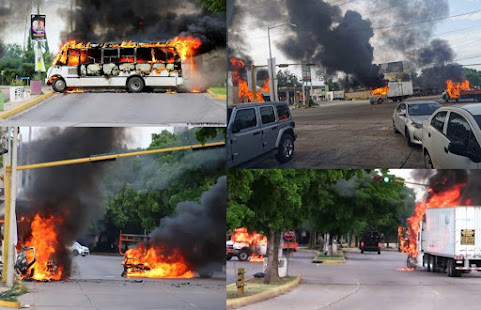 Recently, drug gangs South of the Border and El Chapo's son beat the Mexican military in a shoot out and troops were forced to surrender, hand over their prisoner and retreat.

Locally, our blog community has been talking about the rising local power of drug gangs for a couple of years and what we've seen on KC streets is now reveals our FIRST WORD as news fact.

THE MEXICAN DRUG WAR IS GETTING WORSE AND THREATENS KANSAS CITY MORE THAN LOCAL AUTHORITIES ARE ALLOWED TO ADMIT PUBLICLY!!!

Here's yet another confirmation and follow-up . . .

"The suspect in a recent case told officers the people he works for would kill him if he was deported back to Mexico and he’d rather die in the US because at least he’d get a funeral. It’s unclear which cartel that suspect is tied to . . . An official for Jackson County’s Drug Trafficking Task Force says several of WORKERS FOR THE CARTELS operate in the Kansas City metro. They all have a gentleman’s agreement to get along but south of the border, there’s currently a violent struggle for power and drug routes into the US."

Let's not forget that earlier this year a DEA special agent warned the cartels were operating in Johnson County. 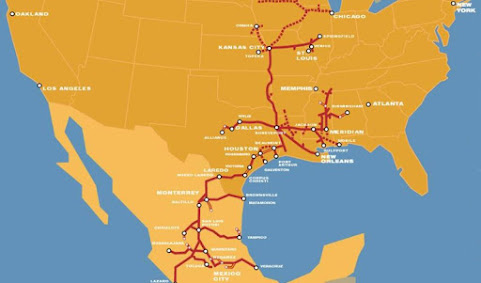 And then . . . In the Summer, the Feds broke up a heroin smuggling operation from Mexico thru Kansas City that was far more determined and profitable than The Caravan. 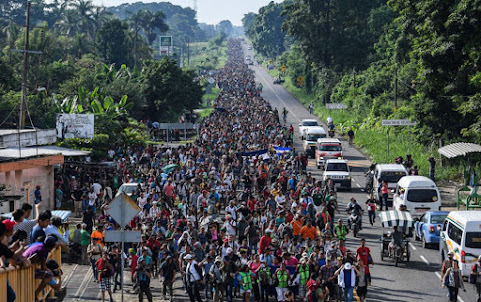 The political component of coping with a NEARLY FAILED STATE RIGHT NEXT DOOR can be seen from both a progressive and conservative vantage.

The fight against drug cartels confirms the fears of immigration hawks and Prez Trump MAGA supporters who hope to "build the wall" in order to try and keep out danger, gangs and violent criminals. 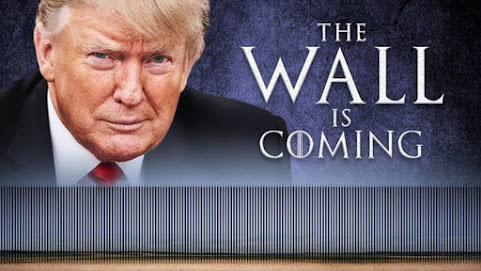 Progressives view refugees fleeing these desperate circumstances more compassionately and work toward comprehensive immigration reform to humanely cope with many innocent victims and children caught up in the violence.

Further reading from a global perspective regarding the war spreading to Kansas City streets . . .

Vice: What It's Like to Report On the Mexican Drug Wars

Economist: The lessons of a shootout in Sinaloa

We can debate the tactics to cope with the impact of Mexican drug war spillover but denying the ripple of violence on Kansas City streets only threatens to make the rising tide of violence worse as more drugs and blood flow on local streets.

^^^ It can never be high enough, Americans aren't supposed to deal with problems by hiding from them. That's the coward's trailer park way of coping with problems.

Makes sense the Mexican drug war is over here considering all of the Mexicans are over here. Math is fundamental!

Legalization is the only way to eliminate the violence. Take the profit motive away and people don't have much reason to kill each other. Both foregin and domestic crimes would drop.

Wow, I guess their weed is REALLY powerful if it's causing this kind of reefer madness. Better stay away from that wacky tobaccy.

Dumb-ass. Don't make me laugh in the morning.

Tony is dead on the money here.

While we are literally paying for a wall in Syria and gnashing our teeth over whether or not to leave, Mexico, our neighbor to the south, is cratering in the face of cartel violence that is indeed spilling over into our nation.

Our politicians are so corrupt, so venal, so corrosive, ignorant and blinkered in Washington DC, that the ONLY thing they care about is power, sinecure and cash euchred out of what is left of the middle class.

We DON"T NEED OIL FROM THE MIDDLE EAST ANYMORE.

Bring our troops home and station them on the southern border to effect the Rule Of Law.

The Mexican government, as corrupt as it is, needs American help. The cartels should be destroyed, just like ISIS.

BTW, EVERY ISIS member now under guard in Europe and the Middle East should be executed post fuckin haste.

There are NO "Hearts and minds" to be convinced in the struggle to maintain the rule of law in Mexico. Kill the Cartel members, KILL MS 13 members to the last fuckin man.

The existence of these cartels in Mexico is only possible because the Mexican government is part of the cartels.
The Democrats and some of the Rinos are also clearly on the take here in the U.S.
Keeping borders open is about allowing drugs in and about money for politicians and corrupt law enforcement officials.

Liberals were all too ready to make Kansas City that embraces illegal immigrants. I must agree with our President, and I dont like to, but we arent getting the best that Mexico has, we are getting the scum shit bags that rob, rape, murder and steal. It wont be long... plus, they have babies at alarming rates.

The biggest distributor of fentanyl in the USA is fedex. Cartels buy it online and it gets shipped to the states, mainly California and Tennessee hubs, then shipped to Mexico. If you go after them the market slumps. Has trump touch that in his trade war? USA news outlets won’t touch it. If you followed el chapo trial, the DEA knows details, but they chose to focus on him. There’s 3500 tons of coke sitting in Central America right now waiting for the market to get hot again. The cartels got rich on euros now it’s back to the USA, the wall is meaningless.

If the gov't legalized and regulated/controlled access to drugs in this country, you'd put a stop to the worst of the cartels almost immediately. But the us gov't is too heavily invested (read billions of $$$) in the culture of drug interdiction (e.g., DEA, FBI, Drug Czars et al) to do the smart thing. Kinda like gun control; we'd rather cut off our nose to spite our face; deaths from guns and drugs are a small price to pay.

And hell again, that would put millions of Americans back to work (re)building America's crumbling infrastructure, instead on most people needing to work 2 jobs or more to make ends meet.

But all the above would require both common sense and gumption; folks couldn't just argue their talking points any more. So, sorry, ya gots what ya gots and there ain't no more.

The cartels also bring exotic mexican food to widen your culinary choices - it's call diversity bigots and it's our strength so enjoy your tacos while you become the the guest of honor in the next extreme cartel violence video on the internet. You fucking fascists you will open your country, homes and hearts, to the oppressed m13 and cartel members.

^^and yet that violence is completely exaggerated for the rubes and morons to slurp up. Weird.

I thought this was all a manufactured crisis?
So which is it

Chuck comparing Syria to a wall on the Mexican border is laughable and shows just how stupid and out of touch with reality he is.

A wall on the southern border isn't going to do anything to stop the flow of drugs.

^^^^ Oh chimpy dance for us or no bananas for you, you dumb little monkey! Hahaha!

Since the Mexican government is so weak and corrupt, why don’t we just send troops to Mexico and kill the cartel members? It would be tremendously satisfying to kill a Mexican criminal.

The drug war supported and brought to you by democrats and all the south of the border trash that comes our way which is allowed to stay and protected by out gay leaders.

"Threatens Kansas City" with what?
Fewer Mexicans?
Thanks, but I don't need a new roof, so it doesn't matter.

The single most hilarious point here is that the US made Mexico the single largest manufacturer/exporter of opium in this hemisphere by encouraging & paying Mexico during WWII to grow more and more and more of the stuff: We needed to buttress our supplies of morphine (think soldiers blown literally apart, but still alive.)

Better yet, and laughably ironic, Mexico has historically had a very low drug use problem. It's always been America with an insatiable appetite for the stuff.

Yes, I'm sure mexico would become peaceful and non-violent all of a sudden if we just legalized drugs


But, But we are the democrats and we like this kind of stuff in out city. We don't want a wall or law enforcement. We have plenty of money to pay for everything they need in exchange for a discount on drugs. This is why we elected Sharice to handle these things for us and isn't she doing such a beautiful job?
We love this crime we love the smell of burning vehicles and the sound of gun shots. Why? Because we are the democrats!

7:05 Legalizing heroin, meth, coke, fentanyl etc. is the answer? AOC follower for sure. When is your lobotomy scheduled?

Probably no more than America will suddenly become an oasis of civilization after Trump leaves office/dies, but both are worthy goals.

Further, if the flow of drugs over the Mexican border were to be reduced by 75-80% by drug legalization, Mexico would not be a US problem.

Just as America's ongoing love affair with unregulated weapons and the attendant mass killings that arise from same are Mexico's problem.

In both instances those things are merely an internal affair for each country.

Legalization in other countries, along with medical support services, has been found to work in countries that have instituted it.

The fact that the powers that be prefer not to bandy that around does not change the facts.

Legalization worked for alcohol. Prohibition not so much.

Oh no!!! Marauding hoards of bad hombres are burning cities as we speak!!! My God, what we have we done to deserve this! They're coming for your wives, your daughters, your kids!!! Only President Trump aloane can stope this madness!! Why hasn't he!!! God help us all!! Be afraid, be very afraid!!! Whaaaa!!! Whaaa!!!!!

It’s time to annex Mexico. It’s obvious that the Mexican government can’t control these domestic terrorist. The citizens of Mexico would support US troops on the ground.

No dipshit the time to act is before all that happens... idiot

Be much better to have US troops in Mexico than syria

Shoot members of drug gangs on sight. Stack 'em up like fire wood and light it. The time for civility toward these monsters is over.

Oh Chimpy. Bit of a rampage in the old cage today I see. Lol

That wall is working so well.

My former Boss was/is a cocaine addict, in a JOCO company. He is partly responsible for all this violence, he spent hundreds of thousands on cocaine. others of you that sniff coke are responsible for the rest of the mess. My boss lives in a nice house in north JOCO. Nobody, not even the Shawnee police care that he is a user. They want the dealers. He gave a company speech with white coke power under his nose, as he sniffed in the bathroom just prior to giving the speech. Yes Bill, I am taking about you Mr. loser! And your loser wife susan!

How is the wall in Colorado working out?