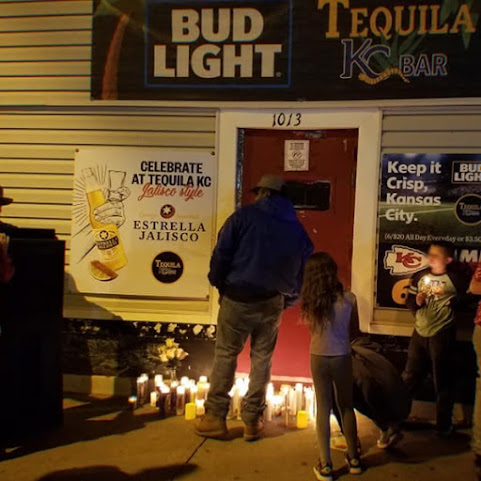 Special thanks to TKC readers and community insiders sending notes our way.

NOTE: TKC WILL NOT SHARE SNUFF FOOTAGE OF THE SHOOTING NOW DISPLAYED ON SOCIAL MEDIA SITES!!!


The scary postage stamp video is out there and a lot of people have sent it our way as well but everyone should determine their own comfort level when sharing footage of people gunned down. As always, this blog focuses on community and policy impact . . .

An important and tragic milestone for the community . . .

"Hundreds of people walked along Central Avenue in support of the families who lost loved ones in Sunday's deadly bar shooting."

The street was shut down for the massive vigil . . . 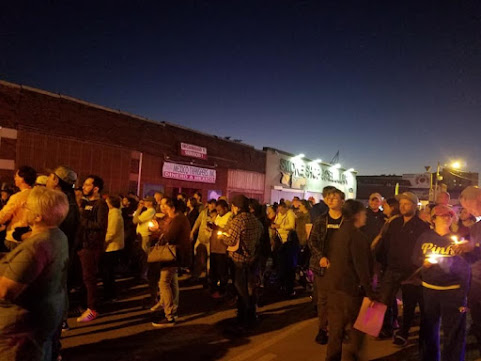 There are a lot of fundraising efforts, here's one shared by a young KCK leader:

"We as a community need to help the victims in our community. Please donate to this family a victim to the mass shooting here in KCK. Fundraiser by Sarah Harrison : Help with Medical Expenses"

Another look at the crowd as more people arrived to share their sympathies throughout the night . . . 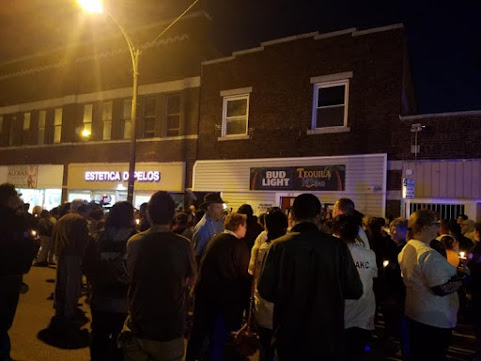 More info and news links after the jump . . .

KANSAS CITY, KS (KCTV) - The head of the Kansas City, Kansas Police Department said that officers had responded to a bar Saturday night prior to a deadly shooting but did not make any arrests. Chief Michael York said that there had been a stop by KCKPD officers following an initial confrontation at Tequila KC Saturday involving Javier Alatorre and Hugo Villanueva-Morales.

KANSAS CITY, Mo. - A deadly shooting at a Kansas City, Kansas, bar early Sunday stemmed from an earlier disturbance that resulted in one of the shooting suspects being kicked out of the business, authorities said Monday.


Owner of Tequila KC: "When people heard the first shots, everybody started running"

KANSAS CITY, KS (KCTV) -- KCTV5 News talked to the bar owner of Tequila KC about what was going on in the surveillance video that was used to identify the suspects. He says there was a fight between one of the suspects and other people in the bar earlier in the night.


'We thought it was a dream or a lie': Family reeling from loss of loved one in KCK mass shooting

KANSAS CITY, Kan. -- FOX4 is learning more about the victims in a mass shooting that happened early Sunday morning at Tequila KC in KCK. One of four victims who was killed was Everado Meza -- known to his friends as "Ever."

KANSAS CITY, Kan. - The bartender of Tequila KC where four men were shot to death and five other people were injured early Sunday morning in Kansas City, Kansas, said one of the gunman was familiar with the bar. Bartender Jose Valdez said Hugo Villanueva-Morales had been kicked out about a month ago.


Man shot in KCK mass shooting says he thought of his kids, was determined to get home

KANSAS CITY, Kan. -- Of the nine people shot at Tequila KC Bar, five made it out alive. One victim who is sharing his story with FOX4 described the scene as something straight out of a horror movie.

Hundreds of people walked along Central Avenue in support of the families who lost loved ones in Sunday's deadly bar shooting.The walk Monday night was an emotional one.Angelica Rosales, the stepdaughter of Francisco Garcia Anaya, said she will never be the same. "He didn't deserve to die," she said.

Pray for the families.

They should have a memorial walk all the way to Mexico

Post the footage. Public has a right to know and see it!

Father of three, construction worker, has no insurance, but has time and money for pool in a bar.

Y'all, vote Dem so his fam gets FREE insurance, and those boys get FREE college, ya hear?

^^^^^ people deserve compassion and not just because they agree with your dumb politics.

Good to see all of the community come out for this event. I hope that the show of support will equal a outpouring of tips and information and participation in bringing the second sugar to Justice. Visuals are nice and maybe people need them to grieve but what's more important is information to help police do their job I think a lot of that will happen but this is a good start.

The community harbored these thug illegals, in n out jail, elected politicians pro illegal immigrants and an inept soft on crime prosecutor.... they reaped what they sowed.

Are the two shooters illegal immigrants? I haven't seen that reported yet, which I find very strange since most readers want to know that, but I haven't read every article. Also, I see the KC Star Editorial Board and reporter Tammy Ljungblad (they oddly have both names on the article) today saying that "red flag laws" could have possibly prevented that because the shooters would have been flagged and had their guns taken away. That's pretty naive if they/she thinks they would have given up their guns or not gotten guns from a friend just before the shooting. Pretty lame perspective because most people seeking revenge will take extra steps or skirt the law to go through with it. The editorial seems to be written by someone with a 6th-grade mentality about the real world and an insulated view of violence.

5-53 , sorting out the exact status of immigration, legal residency, visa etc of a guy the journalist has only just began investigating in addition to all the other questions and facts and witnesses and leads and tips etc that the reporter is trying to figure out in a breaking story .... not necessarily a conspiracy to cover up or "very strange" ; it is a whole field of law with its own court system and specialists who do it exclusively.

Well we won't move to that neighborhood as we are priced out of the Plaza area.

Alright this is old news already let's move on to Mahomes ankle please.

Red flag law would've help...fuck these liberal gun grabbers. What would have helped is if the legal system would have done its job instead of a revolving door and turned them over to ICE.

Besides all that, they had the guns illegally anyway so why would any rational person think they would hand them over or not just get another?

Well it's KC's "Little Mexico". What do you expect?

Beto wants your gun, or maybe you ignore Caucasians who take on Hispanic first names in a unseemly act of cultural appropriation.

^^and nobody wants anything of yours shit-bird. Clean up please...you stink!