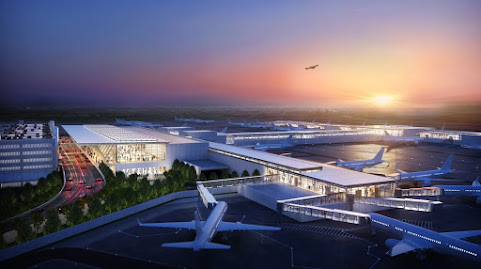 Whilst our blog community has raised concern about the "one percent" for the arts. This story offers AN EXCEPTIONAL AND IMPRESSIVE look at the players in competition for more KCMO arts money . . . Checkit :

StudioKC: Kansas City’s Municipal Art Commission Moves to Reassert its Authority Over Public Art, the Design of Structures Built by the City and Stewardship of the City’s One Percent for Art Program

Based on the $565 million vertical construction cost of the new terminal and a new garage, the one percent formula calls for about $5.65 million to fund public art at the reconfigured airport. That figure represents the biggest art budget in the 28-year history of Kansas City’s program.

The city charter mandates that the One Percent for Art program will be administered by MAC, an appointed panel of volunteers.

“Through the One Percent for Art Program, the mission of the Municipal Art Commission is to serve as a catalyst for artistic growth and aesthetic excellence in our communities,” the charter states.

The process of choosing public art also is supposed to involve a selection panel that includes artists, architects, community representatives, tenants of the facilities and other experts.

In addition, MAC’s mandated responsibilities include “the design of buildings, bridges, fences and other structures built by the city; and privately-owned signs, skywalks or other structures that extend over public property.”

But while the mandates are explicit, a cloud of confusion has descended on the program. MAC has gotten off track in recent years, to the consternation of public art and design advocates such as Marc Wilson, former director of the Nelson-Atkins Museum of Art.

“There are disturbing questions in terms of accountability to the public over how this is being run,” said Wilson, who was among those who pushed for adoption of the One Percent for Art program. “The city statutes give authority to approve the design to the Art Commission. Why were they not brought in? What’s going on? It doesn’t smell right.”

Translation on the entire hot mess . . .

ALREADY WE NOTICE LOCALS PLAYING 'FAST & LOOSE' WITH NEW KCI CASH AND THE ARTS COMMUNITY IS LIKELY TO BE THE FIRST TO GET CHEATED!!!

At this point there are simply too many moving parts and so many of the concerns about expenses and delays are now being realized. 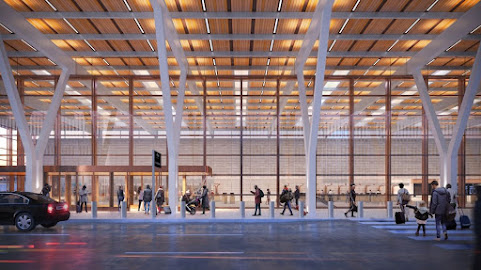 It was too much for Sly and he started it. "Hogs at the trough" applies to almost everybody involved with this one. Only going to get worse. Quinton will never be able to control it.

What's bad is that it's going to be smaller and much more flimsy than what it replaced.

we all know where this is heading, a giant statue of a former mayor that started this mess. It will be called “fat and loose!”

All of this fighting over money and we still haven't seen any real designs, only "renderings" despite the millions taxpayers have doled out to Edgemoor.

I think Julius raises a great point in his writing. What concerns me is that there hasn't been any progress to reestablish the municipal art commission and get it going at full speed with the transparency and accountability that such a huge fund deserves.

KC has failed to prepare for what's happening at the airport and that always ends in disaster. Hope that the new council and mayor can quickly get us up to speed.

Street art all over.

It’s a cheap warehouse building with a glass front. The concern for me is the airlines can say the price is whatever they want and charge whatever they want. Is somebody going to actually verify the price to build this thing or are we just taking their word for it? Seriously, they say it’s 1.5 billion and if they only spend 500 million but charge people for 1.5 billion. This thing stinks to high heaven.

The Suits calling all the shots on Art. Pretty funny stuff.

A multi-million dollar slush fund with no accountability for how the money's spent?
In KCMO?
Shocking!

Ha! Old people fuming about something they will never use!! Keep tilting at those windmills geezers! You guys are so lame!

We have 200 less cops than we need...but millions for this flag art shit? This shifty city deserves what it gets for picking leaders like this.

I was gonna comment, but I just had diarrhea and my diaper is full. Worse, I am out of depends. I guess I will have to get the walker and knee brace and try to get to Wal-Mart.

^^You're right!! A brand new airport, the best NFL quarterback the game has ever known, a new streetcar expansion, one of the best zoo's in the nation, and a revitalized downtown. KC is on the move!!!!

Oh chimpy, you're supposed to dance for us, c’mon now dance! Or no bananas for you! Haha!

Did the "Arts Commission" have anything to do with the existing "art" as you approach the terminal?
If so, I don't blame the city for leaving them out of the equation.

^^did you ask them? Why are you asking us? Jesus, find a life.

Jesus this thing is going to be a financial disaster. Literally everyone warned about it but local media pushed this shit and acts like corruptions and graft never occurs in this city. They are the enemy of the people

@9:55 - he asked because not all of the posters here have had their memory destroyed by using cheap street drugs, and unlike you we can remember facts. Now go back to playing with that pair of Mommy's used panties you stole and STFU!

One spending measure which was not renewed by Sly, Reed and his band of unqualified folks was the $2,000,000 annual expense to pick up trash around the City by city employees.
All of the other spending on his east side projects called for cutbacks in road maintenance, city streets, police, and yes trash clean-up.
Lucas has reinstated this $2 million measure. Lets hope this is a sign of positive things to come from his leadership.

Tried to reach members of "The Arts Commission" for verification but they were all on vacation in Barbados for the next three weeks.

Agree with T, this is great journalism. The public art debate is going to be something that starts a lot of argument over funding in the future.

This is everything that is wrong with this "transformational project." It started out as a "needed city resource" and now from unions to minority contractors to starving artists (likely for a reason) it is all about a payday. They could not care less about KCI as a resource other than a resource for personal enrichment. And if all of the other public art around town, from the "what the hell are those" welding projects on top of Bartle to the billboard frame with a leaking firehose at KCI, is any indication, these people are the last people who should be given a dime for "local image." And I see they already appear to have squeezed out the jazz musicians who not only qualify as "artists" but also are actually a part of the city's heritage. Since they appear to be fond of statutes, perhaps it is time for a responsible Council member to sponsor a new one to protect this billion-dollar feeding frenzy from these people.

Yeah these same people who are freaking out about (OMG) a parking lot and likely want to wrap it in some sort of urban prairie vignette are the same people who wanted to "beautify" the Broadway Extension north of the river by taking down the billboards that generated revenue and put in landscaping that is now falling apart and is overgrown with weeds. Of course, it all ignored the fact that it was all next to a diesel smoke belching train yard on one side and an old airport on the other. But someone felt good about themselves so that's what is important.