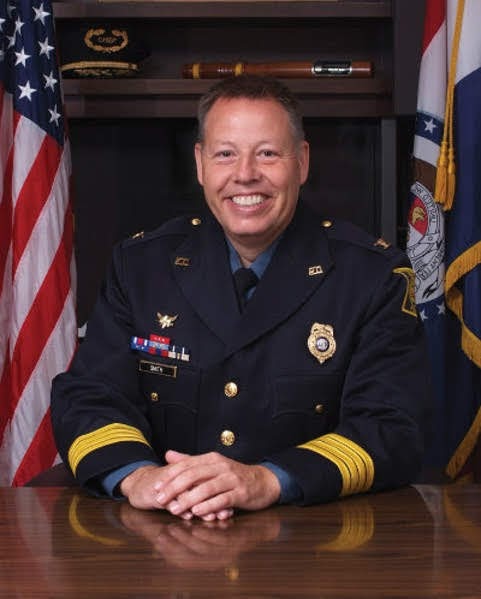 The KCPD Chief touting trust in police over politicos, journalists and clerics in this era of social media trolling and scandal is setting the bar far too low for Kansas City's finest.

Still we understand his point even if his post reveals just a bit too much pride and uses old school, loaded Nixon-era language like the "silent majority." In fact, support for police is loud and proud online with Blue Lives Matter counter-movements shutting down critics of police and answering social media antipathy toward law enforcement.

KCPD Chief's Blog: Study finds police are one of the most trusted groups in America

A recent study from Pew Research Center indicates that police officers are one of the most trusted authorities in America, ranking just below public school principals and ahead of the six other groups discussed in the survey, including religious leaders and journalists. Members of Congress ranked at the bottom of the list.

I think this study contradicts the national narrative that mistrust of the police is raging nationwide. The silent majority of Americans support law enforcement. According to the study, “Police officers also are viewed in a positive light by the U.S. public. More than eight-in-ten (84%) U.S. adults say police officers protect people from crime ‘all or most’ or ‘some of the time.’ Three-quarters or more also say that police officers care about people (79%), responsibly handle the resources available to them (79%) and provide fair and accurate information to the public (74%) at least some of the time.

For several years now, we have seen story after story about how confidence in law enforcement has fallen off or that trust is at an all-time low. According to the Pew study, that is not the case. The stories also say no one would want to be a police officer in times of such mistrust. That hasn’t been our experience, either. We have had a wonderful response to our recruitment efforts and get about a thousand applications for the position of police officer each year. This is a noble profession, and I am grateful that so many people want to pursue it with our agency . . .

The Chief offers some qualifiers and room for improvement but we put the question to our blog community . . .

IS KCPD THE MOST TRUSTWORTHY AUTHORITY IN KANSAS CITY?!?!

I think about it this way, who do you call when you're in trouble and need help?

But when shiz gets really thick most people call the cops. Even the people who criticize them most. So the truth seems to be that even if most people don't like the cops, they still respect them and rely on them.

Is this what the young people are calling a "humble brag" nowadays?

But, cops are hamstrung with the politically correct cancer that permeates the zeitgeist and are now, targets for law suits, social opprobrium and prosecution for just doing their jobs.

As citizens are forced, more and more, to defend themselves in violent situations, we would do well, to remember where we live.

In Kansas, you can probably violently fight back against your attacker, here in KC, if you fight back, you can count on being ZIMMERMANED.

Or petersuckered.... if you’re white that is

The prosecutor here has a thankless job, due to Jury Nullification.

She locks the scumbags up forever waiting for trial, in hopes of getting a Plea Bargain.

Getting a conviction of a thug in Jackson County is an iffy deal, so, she does what she can in my opinion, based on the Realpolitik.

In a recently begun community policing class I have signed up for, the civilians and cops alike ooh and ahh over all of the cool (expensive) gear and applaud the issuance of watching out for your neighbor and calling 911 as a life saver as the PD clamors for more and more spending to get more and more “stuff”. Why none of them can understand that it all comes out of their property taxes taxes which are rising meteorically, defies understanding, but I suppose that as long as they can continue to make the minimum monthly payments while avoiding getting mugged or shot all remains well.

Unfortunately, too much of "the silent majority", minority actually, resides in the urban core and refuses to cooperate with the police, even as their own neighborhoods are destroyed by crime, violence, and homicides.
More folks who "speak up" need to support the cops.

I support the police, I want them on the street in greater numbers but I don't want to pay for their spying toys.

Nothing more than an appeal to authority, the first thing we see when an autocratic regime is on the brink of collapse. Things are getting worse out there than we realize and we don't seem to see that the Republic is being transformed and taken over for the worse.

I have confidence that if I call the police the police will not show up.

Sad.^^ True way to often. Prepare to defend yourself !!! SE.

if i am acting stoooopid, i trust the cops will let me know. Some i will even thank.

i can even think of some i should have thanked and didn't.

The fact that Smitty has to declare he has the support of the "invisible minority" means the Police Chief lost the hearts and minds of the public.

KCPD has no manpower! And that's a fact.......... Forte' screwed that up with his NOVA deal and never replaced the folks he pulled from the field. Now our new Chief has tried to fix things, however with retirements, transfers, etc.... the field is "SHORT" everywhere! I feel for the Officers out in the field doing the real work of the PD. Just looking at their faces, you can see it wears on them... The City needs to get with the program and get some cops hired.Sad thing is no one wants to do this job anymore. Can't say I dont blame them. Lowering the standards hasn't even helped If the public only knew how bad the manpower issues are they would "flip-out".

Thank your for that comment! Best one so far. It's nice when people who know speak up!

Alcibiades is corrupt in thought. By undermining the traditional authority as being "autocratic" he or she is using the now traditional communistic revolutionary ideological statement that excuses all evil on the part of those who commit evil in the name of social injustice. Soon, it will be even bigger evil other than carjax-home invasions are the most traditional Shakespearian types of crimes that are hailed for striking at the heart of the "bourgeois". These moral midgets think they have it on the high school educated who actually read "The Gulag Archipelago" instead of basing their ideology on rap crap. They will be like so many college professors who filled their students heads full of nonsense only to fall under the blade of students who detested their wearing of eyeglasses as "elitist".

Let me share a little tip from the silent majority for the police chief:

If you need a constant,"thank you for your service police chief" and constantly need to be told how wonderful you are, you're in the wrong business.

the us v them that mentality that police departments across the country have perpetrated is absolutely devastating for the relationships between police and community.

Get off your pedestal.

THANK YOU FOR YOUR SERVICE! HAVE A COMPLEMENTARY FOUNTAIN DRINK AND 10% OFF YOUR ORDER.

So, 8:04, just who do YOU call when you are the victim of a crime? Your neighborhood weed dealer? Your mama? No, you call the police - who respond no matter what. No matter the weather. No matter how nuts you sound on that 911 call. They come. Every.Single.Time. Most normal people support law enforcement and others don't. But those men and women who serve and protect deserve a pat on the back from us and if their boss wants to do the same thing then so what. People like you are such a freaking drain on society.

248, I don't call anyone, because last time I called the cops it took them 45 fucking minutes to show up. That was after spending 4 minutes on hold just for 911. So listen blue-tinted snowflake, if you need someone to kiss your ass go to the VIP room at the Argosy.

Wear your blue lives matter shirt to the bar if you need a pat on the back.

You know who else shows up regardless if the weather: the garbage man, the mail man, the Amazon delivery kid. Where's their medal?

If you think showing up to work on a cold day makes you a hero, the bar is real low.

Awww, sweetie sounds like you've spent some quality time in a cell with Bubba. That would cause anyone to have a nasty attitude. Tell you what, my blue lives matter shirt will get me further in life than your meth-rotted teeth and bad complexion. Go crawl back in your hole and cry about how badly life is treating you. Peace out.

Well done sir. Checkmate on me with this incredible line of logic you've employed.


I love the fact you get called out for being a d bag t-shirt wearing fanboi, and you completely endorse the fact that you're a t shirt wearing d bag fanboi.