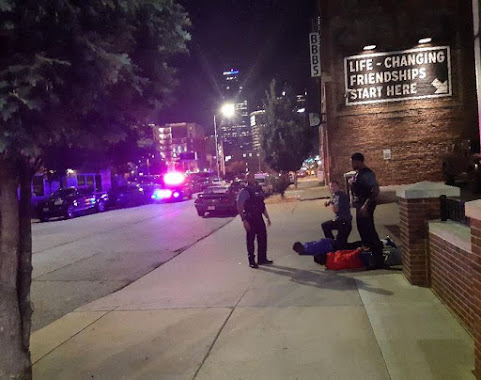 In the photo featured above, citizen media capture KCPD arrest of suspects in the deadly Summer Crossroads killing of Erin Langhofer . . . The tragic shooting has been a game changer in terms of local perceptions regarding neighborhoods near downtown.

Tonight our blog community reports only a slight increase in Crossroads traffic with crowds still less than 1/3rd of their size before the deadly Crossroads gunfire.

TKC TIPSTERS SHARE CRITICISM AFTER THE GUNFIRE WRECKED 1ST FRIDAY AND OFFER A PREVIEW OF A RENEWED PUSH FOR CITY HALL CONTROL OF POLICE!!!

TKC doesn't agree with all of this -- We've often noted that so-called local police control is just a scheme to eventually leverage police pensions. Also, blaming the media chattering class is a stretch given that most of them live in JoCo, are in bed by 9PM and don't shoot anybody . . . Still, this is an important look at the direction in which the local discourse is moving . . .

It's time to independently audit KCPD and their public safety record. With a budget over 200 million a year, why hasn't KCMO seen any progress in fighting crime on local streets?

Let's face it, Kansas City is not Syria and the level of record-breaking violence has become surreal thanks to media pundits and City Hall feedback loops.

What is KCPD's grade card on security in The Crossroads and how did two 18-year-olds manage to destroy the best Summertime event in Kansas City? Who benefits and who loses?

Notice there was no auxiliary lighting on the corner of the First Friday deadly shooting . . . There are still a lot of questions that need to be answered about the demise and future of this event.

We need more checks and balances, this is part of the main reason so many activists are seeking local control and we hope Mayor Lucas listens to those concerns going forward.
##########

There is local control now. The Mayor appoints members of the police board. Blame shooters not police.

The alley gimmick was a bust in the rain BUT it's still nicer with fewer idiots running around the place. If you really like art and local galleries, First Friday remains worth visiting. Food trucks were always overrated.

JUST SAY NO to local control.

How did two 18 year-olds manage to destroy the best summertime event? Are you kidding me? Easy. They are part of a culture if left to run loose can destroy anything they go near.

Funeral homes should attend first fridays to market burial plans. The past always repeats itself. More will die. Are you willing to die for food truck burgers and art? What color casket would you pick? It doesnt really matter as it will be out of sight underground, like your body, for thousands of years. Criminals are released on bond everyday. They like to go out on Friday nights. They would not dream of stsying home on fridays.

The above pic of the arrest has a sign in the background saying "life changing friendships start here". What a freeking lie! Who put that sign up?

Damn, people. It’s pretty sad when the cultural life of a metro area of more than 2 million people revolves around a monthly art walk.

Temperatures and maybe rain I am sure kept more than a few away tonight. As for the food trucks I agree very overrated and the fare ain't worth the price you pay. Save your money and eat at a good restaurant before or after your visit to see overrated art or whatever down there.

Wrong. The Governor appoints the Board of Police Commissioners and the Mayor is an automatic member.

Blame the police (or as the media term them, pejoratively, "cops") for the problems of the citizenry...typical. The police did not fail us, us failed us. Until we can acknowledge the root causes of violence in local communities, decide to take action (most likely while being called racists and worse), and properly resource those actions, the violence will continue. Those that blame the police are simply uninformed/ignorant to the issues.

If you like the way the streets are maintained in KCMO and think your water bills are about right, you might be a booster "activist" for local control of the police.
And, of course, all the members of the Police Board are residents of KCMO and are nominated by local elected officials. The governor appoints from the local list.
More importantly, the police have little to do with the recent murder at First Friday, and raising that issue is just another of the endless list of excuses and distractions from identifying the actual problem.
A minority of a minority population of KCMO is reponsible for almost 90% of the homicides and the vast majority of the regular violence takes place within a fairly small area of the urban core.
Until the focus is on that problem and the appropriate resources are brought to bear, the violence will only continue to spread.
And NOTHING will happen until some of the elected and appointed cowards in positions to at least to try to do something about all this to accurately define the problem.

The Kansas City art scene sucks, literally. The art was crap. Most of our artists are just people trying to be cool, really just a bunch of tatted-up, unemployed homosexuals.

Typical KCMO thinking use stupid gimmicks to try to draw people to a so called thriving and vibrant district.

Come on folks... Let the Men & Women of the Police manage themselves. We have seen what the Baby Kissing Politicians in City Hall do, check out a Council meeting. I suggest they continue to repair potholes from last winter and solve the leaking city water lines and countless more issues before having a cent of input in our safety.

Why doesn't the city put the trucks, jugglers, fire breathers, and bongo beaters at 18th and Vine and see if that pulls that district out of the red instead of relying on taxpayers to cover the losses.

The blacks ruin everything.

Because the demoncraps allow them to.

Attend and die. Or be mugged, or car broken into, or vandalized. Attend at your own risk. Even Dst Systems is leaving the downtown area. Attend and die

Nothing like standing around food trucks while breathing in the fumes from the noisy generators. You could do the same thing at home. Put your running car in the garage, close the door and start eating sub-standard food. Wasn't that fun? (cough-cough-cough)