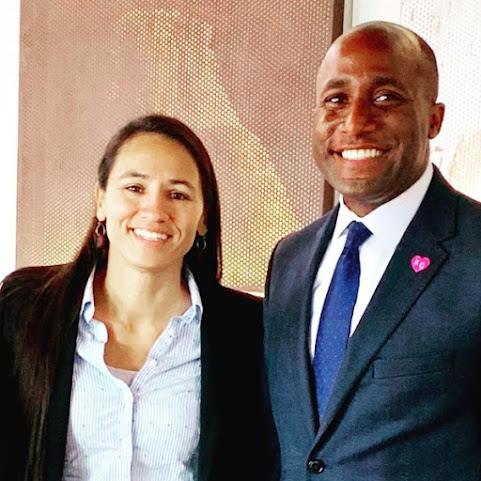 Proponents of Kansas City metro regionalism see the entire metro as a vast resource of talent and open markets where biz can meet every demand with help from a variety of local vendors.

Kansas City Regionalism is just just a fancy term for Leawood biz dudes bleeding KCMO dry because they're part of The Chamber or the Civic Council.

The bigger picture, Mayor Q seems to be getting very cozy with Rep. Sharice. The alliance seemingly has more to do with a willingness to uphold the values of the Democratic Party establishment rather than any real effort to promote regional partnership with viable legislation i.e. real work other than uplifting speeches.

She spoke at his inauguration, they've been spotted at several local fundraisers and a recent entrepreneur lady lunch this week wherein Mayor Q shared a snap.

And so we invite our reader community to caption the happy "political power couple" who are both dating other people but seem to have formed a strong political alliance nevertheless.

Regionalism isn't for consumers to understand. You're out of your league TKC. Sorry.

Actually, the description of how Leawood business interests use KC to their advantage is apt. Sorry, that's how the real world works.

That’s a bad look for sharice, her people aren’t going to approve, not one bit.

Mayor McDrinkerson sure is smiley! Yes sir, he's the smilingest mayor we've ever had for sure!

Has he done anything but photo ops yet?

Sharice has always been a one termer


Sharice is so stupid she can't see what Lucas is doing. You people in JOCO really turned over a big rock with that one.

A lesbian MMM FIGHTER is, by definition, mentally ill. But at least she is not a fan k e Indian like Pochahantas Warren.

^^And you by your post, are the definition of a pants-shitting goon. You don't have much time left, and this is how you chose to spend it. She wins...you lose. But then you knew that right?

Ih Chimpy. Monkeys have such short lifespans. Enjoy your bananas and stop pretending to be human! LOL

Hater bitches. Most of you.

Finally, Sharice has found a nice boy to settle down with and raise a family.
She told me (in confidence) that she has had enough of this lesbian silliness.

11:29: Socialism and entrepreneurship are not mutually exclusive. And if you want to talk about where socialism exists in this country, take a look at the bank bailouts, development incentives, and the like.

Face it. What we have is socialism for the rich and cutthroat capitalism for everyone else.

Just the usual two local D-list politico celebrity wannabees running from ribbon-cutting, to march, to selfie, to local media puff piece, all the while accomplishing not much of anything at all.
Davids certainly doesn't represent anything to do with "regionalism" from the Kansas side. That would be the county commissioners and mayors, none of who want to have anything to do with the incompetence and malfeasance of Jackson County or KCMO.
And Lucas might put some focus on the horrendous murder rate, terrible infrastructure, high sales taxes, and ridiculous water rates in KCMO instead of playing to his groupies.
Two losers with big big smiles.
What could possibly go wrong?

Sharice is a stupid cunt. So is Quinton, the drunk driver.

Why are these two wasting tax money by meeting ? They cannot do a f__king thing for each other. Unless Sherice looses and moves to at least her fourth state of residency and Smiley gives her a job and maybe a loan.

Quinton can take Sharice to his favorite Lawrence gay bar, so they can hang out with other faggots and lesbians.

When you elect gay people to office they run around doing gay ass things.

Two one timers getting their picture taking together in happier times! Awwww, ain’t that cute! Hahaha!

Yet they've done more with their lives than any of you bag of dicks. Weird.

"Socialism and entrepreneurship are not mutually exclusive." You must have a very odd definition of socialism. True socialism involves the government owning all means of production. That is the very opposite of entrepreneurship. Your examples of the bank bailouts etc. were not socialism at all, since the public ended up funding but not owning those enterprises.

At least they are smart enough to know you don't build the region by competing against each other.

The GOP bi-state plan has been a competition to figure out who can hand out the bigger tax giveaway to move jobs back and forth across the state line.

These idiots are not accomplishing anything. Q is already a big fail in everything.

^^^ He's okay at tweeting, and taking selfies at photo ops.

(Glances to her left)

They have known each other for years. They went to law school together.