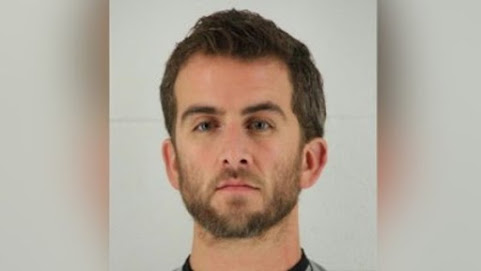 Golden Ghetto scandal is at a conclusion but the aftermath reveals dark and predatory side to local suburban life . . . Checkit:

According to court records, the teen told police he began talking with Adrian on Sept. 6 through Grindr, a dating app similar to Tinder, but directed toward for gay and bisexual men . . .

KSHB Explains The Court Moves: A no contest plea means that he acknowledged the evidence against him was enough to secure a conviction, but he did not admit guilt. After the plea, a Johnson County judge found Adrian guilty on both charges

It shouldn't be unsettling. A lot of Johnson County teens are gay and they use gay dating apps. Deal with it.

^^^ Excuse me Queen. Grindr is anything but "dating" at all.

Look, I hate gay dudes as much as anyone but this doesn't really seem to warrant jail. He should lose his job and all that though

Now that Shawnee has passed faggot-friendly ordinances, he probably will get his council gig back.

No question this guy’s actions were wrong and he deserves to be punished, but the “victim’s” family need to wake up and face reality. If their son was on a gay dating/hook up site, chances are he has been messing around with other guys. The family feigning shock is as ridiculous as the parents of straight kids who are convinced their kids would never have premarital sex.

So the kid lied and created a profile saying he was 18. Shouldn’t have been on the website to begin with but we always overlook that little detail.

What is wrong with you people? It has nothing to do with the student's sexuality. He was abused by a teacher -- an adult. This isn't premarital sex, it is child sexual abuse. The teacher needs to go down in a big way.

"According to court records, the teen told police he began talking with Adrian on Sept. 6 through Grindr.."

"On September 6, 2018, Adrian began talking to the student on Grindr, a dating app similar to Tinder, used by gay and bisexual men. Adrian's messages quickly became sexually inappropriate.
The next day at school, while the two were alone, Adrian locked his door, began kissing and touching the teen, also performing oral sex on him.
The suit goes further, saying that by allowing Adrian to be the head of the Gay-Straight Alliance LGBTQ Club, the district enabled him to gain a further position of trust among those students, including the boy he sexually abused."

1) Teacher deserved to be fired for having sexual contact with the student AT SCHOOL.
2) Student was active on Grindr site and voluntarily communicated/sought out the teacher's attention. Thus, student shares culpability.
3) Student willingly met alone with the teacher and volunteered to participate in the sex. This was inappropriate behavior, inappropriate setting, but not an attack.
4) Shawnee Mission East is partially to blame for promoting a school LGBTQ club.

The student is a MINOR -- not capable of giving consent! It is abuse.

10:53 makes some valid points. In a nutshell, the student was a cock tease and definitely deserves part of the blame.

^^^Sorry. That ain't the way it works.
He knew the kid was a student in the school and he didn't give a shit.
He also knew all of the policies prohibiting this behavior.

He's a millenial and a Democrate / Liberal, what do you expect?? - crime, and sexual faggotism at its finest born from parties that fight to keep the WRONG right! Fuck faggots, and just like cochroaches LGBT is now fucking everywhere!!

Teachers should get the same background check as (background investigation) cops do, including the polygraph test to see if teachers are child preditors! Seems like teachers being inapropriate with a underage students happens often in the metro, imagine how often it happens across the country. Things need to change!

Not surprising he was a city councilman. Elected office attracts the worst in our society.

For all of you who didn’t bother to read about the “crime”, the student in question was NOT A MINOR CHILD at the time, he was already 18 years old.

The “victim” was 18, a legal adult, who voluntarily went on Grindr looking for an experience. He should take half the responsibility.

If the student had been 18 and in college, messing around with a female professor, all you pious upright Christians on here wouldn’t be batting an eyelash, you’d be calling him a man and giving him encouraging side winks.

Your faux outrage over an 18 yr old engaging in sexual conduct with another adult over age 18 is quite laughable.

^^Learn the Kansas law, stupid.
A teacher cannot fuck around with a student. It is called "power imbalance" even if the student is not a minor.
Adrian knew this. They drum it into your head when they hire you.

And , by the way, I am not outraged about an 18 year old having sex.
Hell, I was fucking around with adults when I was 16. Just wasn't stupid enough to get caught.

Another LGBTQ pedophile off the streets.

I'm disappointed that Justin Adrian is still out on bail!!! The judge is weak. Soft on sex crimes. She allowed Adrian to continue to live in public--and even tho convicted sex offenders are not allowed around children, she made an exception that allows Justin Adrian to visit his nieces and nephews "for the holidays", waaaaa. And to visit local bars and restaurants, with or without his husband--as long as he does not drink.

No discussion of vaping or using marijuana.

Most sex offenders morph from having "a type", eg 14 year old cheerleaders, to much younger victims. Look out, parents taking your kids and teens to Applebee's! Tanners's. Or Target, where he tried to meet the Olathe East teen four times before locking him in the classroom. If Justin Adrian is in the house!--you better accompany even grown children to the bathroom.

So why isn't Adrian in jail NOW? The minimum of the two sentences is one year in prison. The other minimum is 15 years to 35 years. And the judge reserved the right, yesterday, to give him the max on either charge.

Lock him up!
Or lock up this judge.
I don't think she has a lifetime appointment.

All modern research shows sex predators cannot be rehabilitated. He will repeat. He will escalate.

Is he still married to the JC Nichols realtor on the Plaza???

serial sexual predator.
predator preys on a minor.
covered by the KNEA,the BASTION of honesty, integrity, and "anything goes" as long as you are a DEMONCRAT.

WESTERN SHAWNEE
voted numerous times for city council candidates who were ( are ) serial philanderers, including one who caused the divorce of a prominent state senator.
then, west Shawnee elects a serial sexual predator.

YOU COULDN'T MAKE THIS UP IN A SPECIAL EDITION OF "TRUE DETECTIVE".

Gee, Tracy. Do you think any of his nieces or nephews will be on Grindr?

Is he still married? Who knows? Newsflash: Many married couples have unconventional marriages, which falls under the Billie Holiday rule (Ain't Nobody's Business).

Gee, Tracy sure seems to have a grudge against judges. I guess ladder lawsuits will do that.

I feel bad for the guy. Yeah, it shouldn’t have happened with a student or on school property, but being fired should have been punishment enough. Giving a bj to a willing 18 yo that you’ve been chatting with on an adult dating site is a far cry from cruising a playground for a minor, Tracy. How many 18 yo gay virgins do you think there are? What if two two 18 yo gay students had gotten caught under the bleachers? It would have only been a joke then.