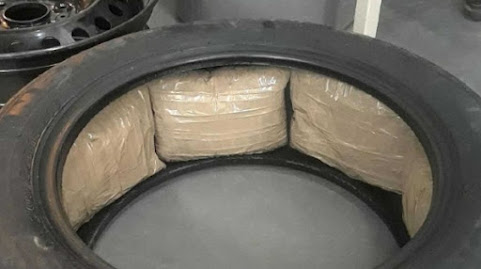 KANSAS CITY, Mo. – A Kansas City, Missouri, man has been charged in federal court with drug trafficking after investigators seized 144 pounds of methamphetamine hidden in automobile wheels inside his shed.

Jorge A. Rodriguez-Gonzalez, 38, was charged in a criminal complaint filed in the U.S. District Court in Kansas City on Tuesday, Oct. 15.

The federal criminal complaint alleges that Rodriguez-Gonzalez possessed 500 grams or more of methamphetamine with the intent to distribute. Rodriguez-Gonzalez remains in federal custody pending a detention hearing, which has not yet been scheduled.

According to an affidavit filed in support of the complaint, a confidential source told Independence, Missouri, police detectives that he/she purchased a minimum of one kilogram of methamphetamine from Rodriguez-Gonzalez at least five days per week. The confidential source engaged in a controlled buy of one kilogram of methamphetamine from Rodriguez-Gonzalez on Thursday, Oct. 10. When Rodriguez-Gonzalez arrived at the arranged meeting location with his wife and two children (a 6-year-old girl and a 3-year-old boy), he was arrested. Officers seized a Glock handgun from a purse inside the vehicle. A police canine alerted to the presence of illegal drugs in the vehicle behind what appeared to be hidden compartments, the affidavit says. The vehicle was towed pending the execution of a search warrant.

On Friday, Oct. 11, law enforcement officers executed a search warrant at Rodriguez-Gonzalez’s residence. They seized an H&R Pardner Pump 20-gauge shotgun, a TGI Knox 7.62x39-caliber AK-style rifle, a bag that contained 471 grams of marijuana, what appeared to be a drug ledger, and cash from the residence.

During the execution of the search warrant, a police canine also alerted to the presence of illegal drugs in a Toyota Tundra and a GMC Sierra that were parked at the residence. The vehicles were towed and secured by law enforcement until search warrants are obtained.

Ah, another beaner.. You know him, Tony? Either you're related to him or you're sucking him off. Which is it?

from canada to raytown. http://fordauthority.com/2019/06/canadian-ford-dealers-receive-fusions-with-meth-inside/?fbclid=IwAR0gbOj54GX_1M2V-Y_3ygpVnynXtl9BVeHBiI9ilzl9wJAVpyfHyf3Uo0M

That would of peped things up in that murderous dump

Q: How did the nervous suspect give away the location of the drugs when officers arrived with a search warrant?

This is how the world order plans to destroy America. From within. There are many people in the U.S.on controlled substance.and uncontrolled substance. Close to a hundred million people of working age that don't have job's. Or are unemployeable .IT seems like it is easy to get a job if you don't speak English. Twenty million plus illegals. Have job's. And millions born in America can't find work ..Its possible they are unemployeable because they are on drugs.