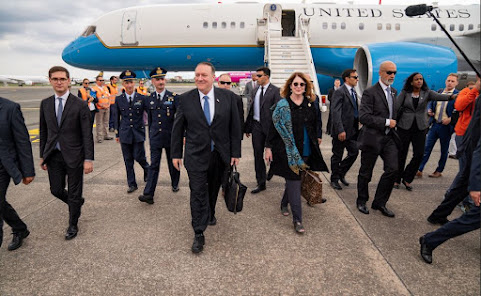 The fight over Prez Trump impeachment continues and there are increasing local implications . . .

Fact: Local news is followed every bit as closely by voters in two of the biggest Kansas population centers and D.C. insiders know that the coverage trickled down to local stations will influence perceptions of SecState who WILL be a key figure in helping the GOP hold on to the Senate in 2020.

- The effort to ensnare SecState Pompeo in Ukraine questions might be more important for Democratic strategists than even the controversy surrounding the Prez.

- Meanwhile, Right-Wing leaders know that in some Kansas & Heartland circles, the SecState actually has a stronger rep than the Prez and will help their cause.

- Identity politics works both ways . . . GOP pollsters know that Pompeo for Senate has the potential to lure away male Democratic leaning men who might not go for the GIRL POWER slate ahead in 2020.

- Meanwhile, Alt-Right movers & shakers realize all of this actually helps Kris Kobach stay relevant as a candidate AND bring Prez Trump supporters with him.

IS SECSTATE POMPEO DAMAGED BY THE IMPEACHMENT HOT MESS OR HAS THIS CRISIS HELPED BOLSTER HIS BRAND?!?

Hill: Pompeo says State Dept. has given initial response to Congress over documents

Salon: Pompeo and Barr are finding out what loyalty to Trump is really worth

Politico: Trump was Pompeo’s ticket to power. Then he got burned by Ukraine.

Sebelius still wins over him. She has a better local profile, people have voted for her before and she'll have every woman in Johnson County & WyCo on her side.

Stop trying to take both sides of this issue. It's more accurate to just report the facts: Ukraine ruined Pompeo's chances.

^^^^ Guess you've never seen Elizabeth Warren in a debate. It all sounds good until you do. And then remember what happened to Hillary Clinton.

He actually sent them information from 2016 when the Democrats used Ukrainian help to spy on Trump.

"The effort to ensnare SecState Pompeo in Ukraine questions might be more important for Democratic strategists than even the controversy surrounding the Prez."

The effort to ensnare?

That train has left the station.

Run, Kris. Run! No one can stop you now!

BTW Congress is NOT sending Subpoenas - they are sending letters.

Here’s the problem: The whole premise behind Pelosi’s pseudo-event of a speech was a complete lie, as former federal prosecutor and National Review columnist Andrew C. McCarthy pointed out in an Op-Ed for The Hill.

“There is no impeachment inquiry. There are no subpoenas,” the piece, published Thursday, began.

“You are not to be faulted if you think a formal inquest is under way and that legal process has been issued,” he said. “The misimpression is completely understandable if you have been taking in media coverage — in particular, reporting on a haughty Sept. 27 letter from House Democrats, presuming to direct Secretary of State Mike Pompeo, on pain of citation for obstruction, to cooperate in their demands to depose State Department officials and review various records.”

…The committees aren’t using their subpoena power — in part or in whole, McCarthy says, “because subpoenas get litigated in court when the people or agencies on the receiving end object.”

“Democrats want to have an impeachment show — um, inquiry — on television; they do not want to defend its bona fides in court,” he wrote. “They certainly do not want to defend their letter. The Democrats’ media scribes note the chairmen’s admonition that any failure by Pompeo to comply ‘shall constitute evidence of obstruction of the House’s impeachment inquiry.’ What a crock.”

A Warren nomination would be a gift to the GOP. I am pulling for it. Markets will tank on the nomination alone. People vote with their pocketbook/wallet (or whatever the trans/gays use). Warren's policy proposals will flat out wreck the economy and financial markets.

If Pompeo doesn't cut himself loose from Trump right now, he's cooked!
He'll "John Dean" himself right out of any career other than putting his name on ghost-written "Tell Alls" and guest starring on the remaining alt-Right radio "Rabble Rousers" shows.

Trump is scared shitless and lashing out at everyone around him!
If Pompeo hangs around, he'll be crushed by one of the "Big Orange Guy's" flailing panicky paroxysms!

Not stupid enough to keep even Tucker Carlson from turning on Trump, @1:38 - but keep the faith, Pompeo's gonna need you to buy a copy of his book telling how he struggled against all of Trump's misdeeds when it gets written for him in a few years.

Fat Kobach only returns to Kansas to check into Leavenworth. Everyone that works for Trump is ruined or in jail. Most of the time both.

President MIKE POMPEO wins in 2024 after the war with Iran.

^^^any fool who gets into a war with Iran will be politically finished as it bogs down.

Someone in Impeachmentville is not paying attention. Of course, diverting the rubes is exactly the point of the latest CIA operation to negate the 2016 election. Has nobody noticed that there is treaty between Ukraine and the USA, signed at Kiev in 1998 and ratified by the US Senate in 2000. It’s an agreement on “Mutual Legal Assistance in Criminal Matters.”

What Dem plan number is this on the preposterous impeachment scam list -- No. 23? As an Independent, I voted for Trump after voting for Obama. All this lying and political harassment of a duly elected president by the Do-Nothing Dems makes me now want to register as a Republican. Pompeo will win no matter how many lame efforts the Dems can muster against Trump.

There's always the option the Democrats will mess this up like they always do. However, Pompeo's tit's in the ringer for Obstructing Justice. Rich assholes get into the mix that took Pompeo down. Showing up in the Ukraine on your own dime to get dirt on Biden is sketch af. There's no Chuck Colson who actually knew what they were doing during the Nixon Adm. Volker got wrapped up in this and gave up information because he wasn't going down on Trumps problems. The new transcripts shows there was a coverup. These aren't complex schemes we are witnessing. In America it's the cover up and not the crime that's illegal. Last Thursday, Trump admitted to the crime on TV which threw a fly in the ointment.

^^^ You’re confused, that was Biden on tape and well, that’s why your called dummocraps.....

July 21st Bill Taylor texting Gordon Sunderland talking to Volker. July 25th Volker advising Zelinski advisor. August 29th Volker to Sunderland with Scott Morrison "ready to get dates as soon as eurmac gets dates". "I think POTUS really wants "the deliverable"? Volker say's "does he know that?" ..Gordon say's might be helpful to get a draft statement"? August 10th eurmac pressed Volker for date. Eurmac confirms that once they have the arms they will make the statement about Biden? Aug 13th After Volker speaks to Giuliani, Sunderland wants Ukraine to look like they interfered with the Democrat election to put Russia in the clear. Aug 17th Sunderland says do we still want Zelinski to respond to Barisma and 2016. Aug 28 Trump holds military aide to Ukraine. Aug 30 Former Ambasador to Urkaine Taylor cancel trip to Poland. "Hope Gordon and Perry are still going?" Sept 1st Bill Taylor covered his tracks and begins to pull out. Sept 9th Gordon Taylor says "POUTUS wants the deliverables" .."as I said on the phone, I think it's crazy to withhold security assistance for a political campaign" ...this all came out on Thursday.

Pelosi and Shumer cow tow to the right wing going back to the Obama Adm. It's not about hating Trump. It holding people accountable for their actions. People in position of power will always use their influence to for their family members. Limiting the scope is the big mistake. Whey don't they investigate Trumps financial crimes? Because it will expose the Democrats financial crimes?

Failure to provide subpoena evidence is obstruction of justice during an impeachment.