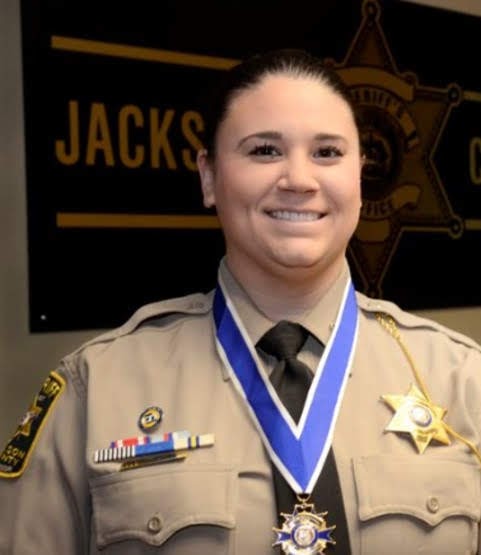 KANSAS CITY, Mo. - Brittany Simek's life changed forever the night of Aug. 8, 2019, and now a Jackson County Sheriff's Office deputy faces assault and armed criminal action charges after an investigation into the incident. "She may recover from the physical injuries," David Smith, one of the attorneys representing her in a civil case, said.


Jackson County Deputy Charged After Shooting A Woman In The Back

A Jackson County sheriff's deputy has been charged after shooting a woman in the back while trying to arrest her in August. Jackson County prosecutors on Wednesdsay charged Lauren Michael, 29, with first-degree assault and armed criminal action.

Have a Peaceful Night!

Ole Backshot as she is known at the station.

Our hero first responders keeping us safe from Byrd scooters.

Many people don’t realize this but Mike
Sharp and Hugh Mills hired a lot of questionable people over the last eight years. This has resulted in the Sheriffs Department being involved in several major incidents that previously were rare occurrences. Deputies have killed several people and seriously injured several others in raids, car chases and in this case, chasing a scooter for riding on the sidewalk. If we had real investigative journalism, a story could easily be found at the department. This deputy should never have been allowed to stay at the department after the first shooting involving a shoplifting person. Unfortunately as always, police get a pass from the public when they should be held more accountable.

If it's that easy to take her taser and use it on her maybe she shouldn't have been a police officer at all.

After killing a shoplifter at the Raytown Walmart she received way too much praise and awards. Made her a little too big for her britches.

Ever increasingly we see the jackbooted thug cops thinking they’re in control of the public and the citizens are their personal piggy bank. See the cops don’t build anything fix anything create anything and more and more it’s becoming usurpe and harass as opposed to protect and serve , let’s face it there’s no money in busting a crackhead the real money is in giving a soccer mom a ticket for a rolling stop in a quiet suburb see then the parasites have money handed to them. So if you really need a cop don’t bother they’re to busy writing tickets for cash out of their personal piggy bank from the hard working public and if they write enough they can get some more plate readers and sell our personal data to the highest bidder and to all the lake Winnebago residents don’t drive anywhere after 9pm you’ll be harassed by your jackbooted thugs in black

I guess 12:08 got caught lurking around Lake Winnebago late at night. Sad commentary and total lack of appreciation for what they do Perhaps you'd leave your phone number in case we need help on a crime and perhaps you'll come over and handle it?

^^^Revenue policing is alive and well in most
jurisdictions. Cops start out wanting to save the world but groupthink quickly takes over and they become lazy and ineffective.

WoW what a bunch of Obamanites on this thread. Hands Up Don't Shoot..... right fella's.. Pfff sad sacks of Liberal Poo.....and a BUNCH of COWARDS... I'm surprised you all didn't start singin Pigs In A Blah Blah Blah. Damn Democrats