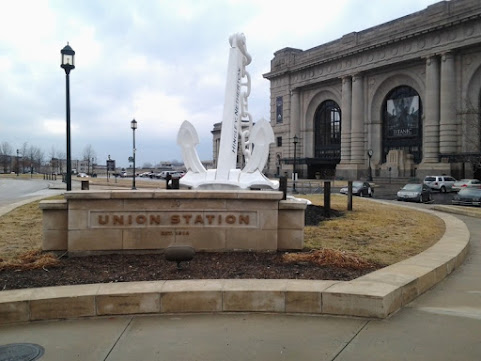 Amid the ongoing decline of print media a new boss promoted to manage KC's paper is actually a great call if only because THE DECISION WILL INCENSE ALL OF THE FORMER LOCAL NEWSIES HE FIRED AND RETIRED!!!

For those with or without access beyond the paywall:

Fannin will lead The Star’s overall operations while continuing to oversee a newsroom that has been a Pulitzer Prize finalist the last two years.

“Mike Fannin is among the most talented editors in America today, and he leads one of the country’s greatest newsrooms,” said Craig Forman, president and CEO of McClatchy, which owns The Star. “I’m delighted that he’s now able to expand his influence both at The Star and also with the community that he loves.”

Meanwhile, we're looking forward to the online ravings agonizing over this move from a senior citizen trust fund baby and a retired and still pretty good metro reporter on this topic . . . But, again, rearranging deck chairs on the Titanic isn't going to change the course of history.

TKC has only one brief interaction with the dude that was pleasant . . . I was standing next to one of the newer reporters when he offered the guy a job and realized KC is both a big city and still a small town in many respects.

However, behind the scenes Mr. Fannin's feisty demeanor is the stuff of local legend and that makes him the perfect guy to guide the newspaper as they transition to non-profit status whilst denying the demise of print media all the way down.

Fact is, subscriptions and circulation are still TANKING but more importantly the RELEVANCE of the newspaper has suffered. They're no longer the final word in civic politics and their op/eds don't make or break political careers.

To put it in terms that local print media hobbyists can understand:

The Star is now The Pitch and The Pitch is basically the PennySaver newsletter.

And so we solider on with social media gossip dominating the discourse and keyboard pundits blaming tech and not the abysmal voting habits of the American public for the downward spiral of a once great American city.

Totally got it wrong here TKC. The staffers don't really like the guy and would quit if they could but there's nowhere for them to go. Sad.

Where's his DUI mugshot you had here?

TKC BREAKING NEWS!!! WHY WASN'T MIKE FANNIN'S MUGSHOT PUBLISHED IN THE KANSAS CITY STAR LIKE SO MANY OTHER LOCAL PO'FOLK?!?!?

Guess you missed the news about Mark Zieman, huh?

^^^^ Gross wildman. And kind of desperate. I liked your post today, good and fun stuff. Classic!

Peter Principled to the bridge of the Titanic.
All engines ahead full!
Close the water-tight doors!
What could possible go wrong?

Suggestions for Mike Fannin:
1. Electronic edition largely hard to navigate. The new edition maybe worse. Locks up- can’t go back easily for me- not intuitive for me- I have a great connection and the latest device- make it like USA Today.
2. Allow comments. Don’t be a chicken shit. Take 2 of you low achievers and have them moderate it. It will make your reporters write better more balanced stuff and fluff both.
3. No one care about your editorial board. They divide readers. Put them on the street doing stories... Investigating is better than opinionated BS.
4. Give the paper away free. Seriously. Think how your readership will go up 100 times what it is today. Marketing will have to be hired by the tens every month. What you are doing is not working. This will be copied by everyone. Don’t do it and you and I both know where your stock will be each time we take a crap.
5. Smile and show your teeth. No one likes a schmuck. You get to make a second first impression by writing something and putting your pic on the cover. Do it soon and smile. Your photo looks like Slots Grobnik... Mike Royko’s old buddy... at least what I thought he looked like... just smile buddy. If you have crappy teeth no one cares... more personable.
Do these 5 things and success is guaranteed. Don’t and no one cares how many awards or Pulitzers you win. Paper is largely unreadable compared to yesterday and unrecognizable. Good luck!
FEBBWSC

I don't know why you have to insult the PITCH. It is much better than the KC Star.

Nice list, 6:58. I agree that the new E-Star format is horrible. A business that would put out such an obviously defective product has lost all self respect and deserves its fate. There are no reporters, so the local news coverage is a bad joke.