OUTCRY AFTER BAD HOMBRE CRIMINAL HISTORY OF SUSPECTED KCK DEADLY MASS SHOOTERS EMERGES!!! 'THEY SHOULD HAVE BEEN IN CUSTODY!!!' 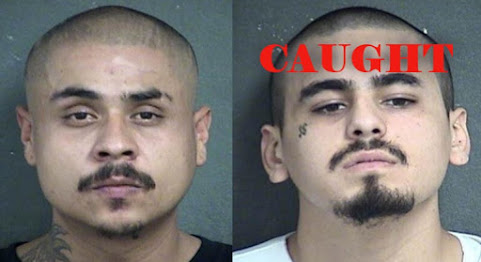 Check TKC comments and a quick review of social media and notice that the "revolving door" tactics of local judges and prosecutors have earned rebuke from locals who demand public safety accountability from officials rather than just community weeping by way of tragic vigils.

ONE OF MANY MESSAGES SENT TO TKC HIGHLIGHTS THE RECORD OF MISDEEDS BY THE SUSPECTS AND ARGUES: "THEY SEEM LIKE CAREER CRIMINALS WHO SHOULD HAVE BEEN IN CUSTODY!!!"

"One of the suspects had several previous failure to appear warrants issued for him over the last two years as well which pretty much have been reduced to signature bonds each time. The other suspect has previous convictions in Wyandotte for attempted aggravated robbery x3 and in Johnson County KS for burglary. He’s also on pretrial release for assault on an officer in Jackson County according to Casenet . . . "

The law & order sentiment is confirmed but, strangely, not highlighted by local media . . .

Alternative perspective: Listen and look closely to Latino community reaction and the public at large -- Any objective denizen of the local discourse will notice more support for tougher tactics from judges against violent criminals and support for a greater police presence on local streets as metro violence worsens.

KCTV5: Suspects in deadly shooting at KCK bar had faced other charges

Noticed some of the Democratic Party candidates turning into an anti-gun argument quickly.

^^^ Yeah, scroll down the page and there's a link of all their reactions wanting to go full on gun grabber.

Beto basically saying: Sure disarm communities so they can be even more defenseless.

Hey now, there are laws that say criminals aren't allowed to have guns in bars. I guess we need to pass even more laws to make sure that the old laws criminals ignored will also prevent this kind of tragedy, even if the first set of laws didn't work. That's progressive.

These two pieces of shit should never have been here.

That said, I have owned and worked in tough bars and danger, violence and chaos are all part of the expectations for the employees.

I knew some folks here who were involved. 3 dead and many wounded.

I worked for Vic Fontana at Walter Mitty's in 1974, later his kid was killed by someone who was thrown out of a bar downtown I believe. Mitty's closed down after one of the very first "Drive By's" in Kansas City, circa 1976.

I used to own the bar at 85th and Troost (Now called BB's Longside and it used to be called The Old Fortress - a Mafia Bar owned by Jimmy Duarte) and worked in a few others. There was always, ALWAYS the threat of violence and most people in my bar carried guns. There were so many fights and guns going off in the parking lot I couldn't begin to count them.

The bar life, is violent. While having lunch at The Summit 2 months ago, on a Sunday, with people dressed in the finest having just returned from church, a hell of a fight broke out.

Alcohol and violence go together.

Hopefully, the Mexican in jail will get beaten to death and the Mexican at large will be shot and killed. Marth Dupree is a piece of shit prosecutor and can’t be trusted.

This just in, courtesy of FBI crime statistics--murders by cutting implement five times higher than those by rifle in 2018.

The democrats don't believe in the police or ICE, so who should be putting these people in jail?

so much for flat earth politics. The Clintons built the prison system and put 100,000 cops on the street. The lines are blurred here with the Party Of Property.

I was a that bar Friday, was glad I wasn't there Saturday.

This is the kind of diversity the criminal democrats have been trying to achieve for years now. Have a few wetbacks shoot each other and then the commies start whining about guns. Of coarse the goal of the communist criminal democrats for a hundred years now is to disarm the citizens of America enabling the commies to destroy us our family’s and enslaving our children in a third world totalitarian shithole that the petty tyrants can milk dry for themselves. So by any means possibly they will attempt this end and the only hope at that point for our country is civil war culminating in the complete destruction of all the leftist traitors once and for all

This was essentially stale and pointless the first time you posted it. Troll game needs work lol

Wow chuck no wonder you're such a fucking insane basket case.

Trump and Republicans claim to be for ICE (but stop their paychecks), and law enforcement like the FBI (but claim they are treasonous).

Bottom line is the GOP won't use ICE properly to enforce the law. They only use them as political props.

At least Democrats are honest about what reforms they want. The GOP claims they are hardliners and will lock them up and send them back, but are liars and continue running and profiting from the revolving door system. That's worse.

Blood is on the Democrats hands.

and all the real violent ones also shop at Walmart. Stop shopping at Walmart, it is a piece of shit store.

Let's see if moving the USDA to midwest makes rural communitites robust again sending all H-2 visa workers and every immigrant to shop at the store that adds to the fuckdome of rural communities as well as being the hot point of crime that it already is. Every person should be making walmart check your receipt b/c you should only ring about 1/2 the shit you put through their self service lines, while 1 of the 3 non-self service lines is open and disabled folks try to check themselves out with no assistance. Refilling water, just toss some change on a conveyor belt in the direction of employee also getting screwed by the company and leave.

and dollar general or dollar tree is so cheap b/c if you buy plastic bags, they get them specially made, put about two in the same size box, and are about 1/4 the thickness of the bags you get at another store that isn't a con.

Millie the Kid, 645, does it ever occur to you that your outcast life will never lead to the types of stories that chuck often posts. That you would have to spend all day trying to gin up a storied experience that chuck could fart out as an afterthought having experienced firsthand life shaping events that you can only read about?

Too many 'Guadalupe' tats! said...

Hey, Juan Bandito @5:46 is back! He's at his abuela's shithole shack in Jalisco to siesta with his daughter-wives, and to hide from ICE. The big dummy has to sell the tires from his stolen peek-up now, because abuela and Tia Maria drank up all his US untaxed wages he sent to their south of the border brothel.

Bet the shooters will claim they are Catholics.

Does Villanueva-Morales even need to go to Jalisco? Isn't Roeland Park a "welcoming city" now?