MAHOMES CRUNCHED!!! SHOWTIME QB TOO SOFT FOR THE NFL AND SEASON OVER FOR THE KANSAS CITY CHIEFS!!! 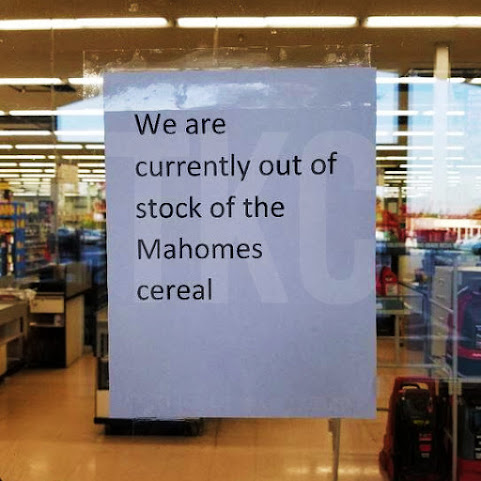 In Perfect Village this week, the faithful said prayers for Patrick Mahomes and his injured ankle that were either unheard or angered the Almighty given the misplaced priories and weak sauce PR effort. Therefore, the Chiefs QB's ankle was struck down in an not-so-super-natural pile of big-ass 300lb linemen . . . Hence, nobody really knows why bad things happen to good people . . . We can only be certain that most of us are COMPLETELY MISTAKEN in thinking of ourselves as good people.

QB PATRICK MAHOMES WAS A BRILLIANT, FLASHY SENSATION BUT THE BRUTALITY OF THE NFL PROVED TOO ROUGH FOR HIS SHOWTIME GAME BASED MOSTLY ON PLAYGROUND TRICK PLAYS!!! NOW HE'S DAMAGED GOODS & THE KANSAS CITY CHIEFS CAN KISS THIS SEASON GOODBYE!!!

Does anybody even know the backup QB's name?

GREEDY KANSAS CITY HYPE HAS RUINED YET ANOTHER PROMISING CAREER GIVEN THAT THIS TOWN IS SO DESPERATE FOR A HERO AT DISCOUNT PRICES!!!

THE MAHOMES MYSTIQUE WAS ALL SMOKE AND MIRRORS THAT LITERALLY SENT HIM TO THE HOSPITAL BECAUSE HE CLEARLY BELIEVED HIS OWN HYPE!!!

He'll be limping around the rest of his life because he was too young and overconfident to challenge Coach Andy Reid's obtuse play calling.

Fanboys will talk about recovery from a "minor patellar dislocation" but the guy's leg is garbage now and he'll never be able to move around the way he once did. Fact is, the violence of the NFL simply doesn't allow for longevity and grid iron success isn't a sustainable or a safe bet. Despite more protection around QBs, it's still a very rough game and the average NFL career is one of the shortest in the sporting world . . . Right up there with those youngster gymnasts who are regularly tortured and raped just for the opportunity to entertain fat tourists at the Olympics.

People rarely understand how cruel sports can be . . .

A sample headline for a global perspective:

Here's a hint: Those youngsters didn't get a free ride to a nice farm orphanage in the country. That would've been nice but history informs us that a lot of them were probably just killed by police.

The point here is that sports is merciless and football is no exception.

What's more important for locals to understand is that a horrific injury suffered on prime-time TV in order sell boner pills is merely the cost of doing business for this corporation that has no qualms about subsidizing the fun & games of fanboys with the cash of crime-ridden urban core enclaves.

Yes, the physicality of NFL football is cruel but the real barbarism takes place in the front office.

And so we share these links on a sad topic with the understanding that most residents desperately avoid the realization that most of what this town believes is nothing more than marketing lies propping up one of many ponzi schemes which power Kansas City.

ESPN: Kelce on Mahomes: 'His knee didn't even look like a knee'

Deadspin: Why coach Andy Reid decided to have his quarterback run such a chaotic play while nursing a bad ankle is beyond me . . .

THAT is some cynical shit right there.

He'll be back in three weeks and he still has an arm like a cannon. No need for all the panicking. He's still one of the best in the NFL.

Don't really believe what those doctors are saying. If the teammates are on record saying the leg look deformed. Doubt it was fixed on the field.

There is still time for the Chief's fans to attend the prayer vigil and balloon release Mom's demand action will be holding for Patrick tonight at the J.C. Nichols fountain.

We need fab and vibrant Lyin' Sly James input on this. Maybe he represent Mahomes and file a personal injury lawsuit against the broncs.

We need to do a massive Firewater Ceremony on Flush Creek and do a mega prayer vigil.

Wull OMFG what are weez gonna do now?

Tony is the king of sensationalism.

The NFL is a predatory monopoly? yes

KC hype set this 24-year-old kid up for a crash? yes

Mahomes believed his own hype? yes (late-night talk show appearances, media interviews about your shoe collection, over-exposure with too many lauding commercials, etc.)

Brazil's street children and favelas "sanitized" by police? yes (The United Nations has accused Brazilian police of killing street children to “clean the streets” ahead of the Olympic Games 2016 to be hosted in Rio de Janeiro.)

"What's more important for locals to understand is that a horrific injury suffered on prime-time TV in order sell boner pills is merely the cost of doing business for this corporation that has no qualms about subsidizing the fun & games of fanboys with the cash of crime-ridden urban core enclaves." THE RING OF TRUTH!

I prefer the queen of stupidity and fake news misinformation.

@9:35- you talk too much and don’t have anything to say. You’re on here pontificating to people who could give a shit less what you have to say. Great use of YOUR time loser. Mahomes carriers a lot of water in this town and matters in ways you never have or could. Please, keep passing your worthless days away on here while we laugh at you. Did you always wanna be a loser when you were a kid, because that’s what you’ve become. You’re dismissed!

Aaww, don't cry for Patty. It's not like he disgraced himself by doing some crimmie crap. He's got the tops in medical care, so he'll be back in a jumpin' jack flash!

Maybe the church should pray to protect his whole body next time.

Guys...come on...everyone knows Tony is a huge Raiders fan. Take what he says with a grain of salt.

Hey Tony how did those Dodgers do this year?

The Chiefs are going to need a backup QB for a while. I'll bet they are in negotiations with Colin Kaepernick.

10:55, dont know about the Raiders, but I do know that Tony is a big fan of black cock.

The team needs to barely make it into the playoffs and then play away for all their games because they usually play terrible in playoff games at Arrowhead. Maybe it was built on Indian burial grounds and is cursed. Can we have a real Indian -- perhaps Elizabeth Warren -- prance around and throw buzzard feathers on the field to remove this home field playoff curse?

Clark here. In order to obtain the finest medical care for our beloved Patrick, I will need to raise parking fees from $ 60 to $65 per game. Because of these damn health insurance companies, we will also have to sell our wieners and cups of beer for $15. Pray for Patrick. Love you Chiefs fans; thats why I live in Dallas.

@9:51- you talk too much and don’t have anything to say. You’re on here pontificating to people who could give a shit less what you have to say. Great use of YOUR time loser. Mahomes carriers a lot of water in this town and matters in ways you never have or could. Please, keep passing your worthless days away on here while we laugh at you. Did you always wanna be a loser when you were a kid, because that’s what you’ve become. You’re dismissed!

It's time for fire coach Reid and make this a REAL rebuilding year.

At 9 and 7 the Chiefs make money, lot's of money and that is all that matters.

It’s an effing game, who cares?

It isn't just a game.
It is a religion.

I'm concerned. Where is Chimpy'd fanboy? Has anyone checked his room at the memory care facility?

50 years of no super bowl participation by the KC team.