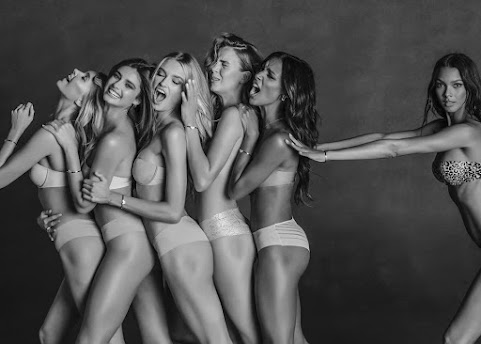 Apropos for #TBT and because black and white images make everything look classic . . . The iconic hotties of Victoria's Secret inspire the start of our news day and a quick peek at pop culture life . . .

BizInsider: Victoria's Secret said it would raise prices and reduce promotions as it embarks on a turnaround effort, but analysts say it’s struggling to keep to its promises

Daily Mail: Lizzie Cundy slams Victoria's Secret for being 'too PC' over its new plus-size campaign - but GMB viewers insist the size 16 model 'isn't even big'

There's a certified branch of local history looming over 328 S. Monroe Ave. in the old Northeast area of Kansas City. A bur oak towers to the left of the red brick house with white awnings, which is owned by Benjamin Jones, who is a mechanic - or self-professed "pressman" - at Hammerpress.

A plethora of local movers and shakers attended Kansas City's Pure Pitch Rally on Tuesday evening to listen to local entrepreneurs deliver pitches for eight startups. Attendees included current and former mayors; investors such as Darcy Howe of KCRise Fund and Keith Molzer of Flyover Capital; and entrepreneurs like Don Peterson whose former company, Infusion Express, is on track to end 2019 with nearly $100 million in revenue or more.

BRIAN: THIS ACCIDENT HAPPENED TUESDAY AFTERNOON AROUND 1:30 NEAR 77TH AND METCALF. TRAFFIC BACKS UP. THE DRIVER OF THE BLACK CAR DOESN'T NOTICE AND SMASHES INTO THE WHITE CAR, LIFTING IT OFF THE GROUND. I'VE BEEN AN OFFICER FOR 26 YEARS. I'VE NEVER SEEN A REAR END ACCIDENT LIKE THAT.

LEAWOOD, Kan. -- The rate of teenage suicides is startling, and many parents are searching for any opportunity to understand why. "With tears in his eyes, he told me we are loosing kids," said Vince Stephens, founder of Father's Club.

BLUE SUMMIT, MO (KCTV) -- When Joe Pace of Joe Pace's Movie Cars takes one of his cars for a spin, he turns heads. "The kids go crazy, but I have a lot of adults that are still children that really go crazy. They can't believe I'm driving this on the street," Pace said.

KANSAS CITY, Mo. -- A Kansas City man is searching for answers after he found a female pit bull shot in the head Tuesday night. The dog was found near Raytown Road and Longview Road. "I could tell by her temperament something was wrong.

Why aren't phones fixed to not operate once they are moving over say 5 mph ? The GPS system could easily be programed to do this. OP says 60% of the wreaks are distracted drivers !!!!

A plethora of local movers and shakers


LOL look you idiots you need to convince "vestors" your willing to rip people off no holds barred if you want startup money.

Lured with the prospect of becoming an "angel", recruits lined up to meet with Jeffrey Epstein and Les Wexner$$$

That dumbass in the car is why I leave my hitch in all the time. You might shift my vehicle forward, maybe a little whiplash for me, but the truck probably won't get a scratch and your little ass car will be totally effed.

Today, cRappers would rewrite song "Bust a Move" to "Bust a Nut!"