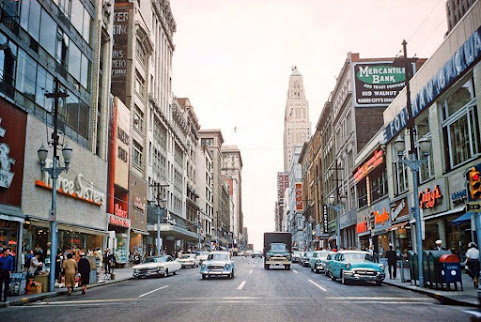 An iconic image of old school KCMO offers news context for where this town has been and where it's going . . . Meanwhile a auick glimpse at a variety of news items for the midday that didn't really fit anywhere else but still deserve a look for our most voracious news readers . . . Checkit:


One person killed in accident involving car and train in KCK

Another Talk With Troy

Troy Schulte's 10-year term as manager of Kansas City, Missouri, will in a few months come to a close. He said one of the hardest things about his job was finding a balance in handling pressing crises and working toward long-term goals.

KANSAS CITY, Mo. -- A Kansas City man is awaiting sentencing for a deadly stabbing. Panom Gai was convicted of stabbing two people in the West Bottoms in November 2017. Prosecutors say surveillance video from the area showed Gai attacking Cynthia Thomas; Thomas was killed in the attack.

Cedar Fair LP, the owner of Kansas City's Worlds of Fun and Oceans of Fun, reportedly is being pursued by a bigger amusement park competitor. Six Flags Entertainment Corp. (NYSE: SIX) has made a cash-for-stock offer that Cedar Fair (NYSE: FUN) is considering, Reuters report s, citing people familiar with the proposed transaction.

The governor's office has spent $340,000 so far on private attorneys to defend the state in a lawsuit over former Missouri Gov. Eric Greitens' use of the self-destructing text message app Confide, according to records reviewed by The Star.


Abortion battle ramping up in Kansas

KANSAS CITY, KS (KCTV) - For the first time since two conservative judges joined the U.S. Supreme Court bench, the court is taking up the topic of abortion. They'll be ruling on a law out of Louisiana that would erase all but one of the state's abortion clinics.


New Missouri bar sells drinks by the hour, not by the glass

ST. LOUIS, Mo. - A new bar just opened for business in Missouri and has gained lots of attention for its unique sales approach. Open Concept sells time instead of drinks. According to the bar's website, customers pay per hour to drink as much as they can handle.

So far, our staff predictions have been as perfect as the For Week 5, the Chiefs return to Arrowhead to face the Indianapolis Colts in Sunday Night Football. Let's see what our staff (and our readers) think this time: Kansas City Chiefs ' record - yet another week passed with everyone picking the Chiefs to win.

MOMENTUM!
(Do dis elevator even gots a floor in it?)

And to think people treat those animals as though they were human beings.

There haven't been that many vehicles, pedestrians, and unsubsidized successful businesses in downtown KCMO since Mike Murphy's last cattle drive down Main Street.
Momentum!