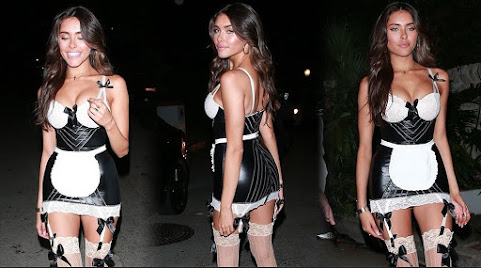 Instagram superstar Maddy Beer is a 20-year-old hottie with an Instagram following bigger than most major American cities. Her costume party creativity inspires this quick peek at Halloween pop culture . . .

Daily Orange: Halloween costumes are restrictive and sexist towards women

Closer to home, here are the nicer community news links we're checking for the morning . . .

Weather is disrupting county singer Luke Bryan's Farm Tour concert again. A concert scheduled for Oct. 3 at a farm in Louisburg was postponed after heavy rains flooded the field and made it too wet for equipment to be unloaded. The concert was rescheduled for Wednesday.

Violent Kansas City Slice Of Life Across The Pond

MANCHESTER, England (KCTV) - A Kansas City man is being called a hero in England after helping thwart a knife attack on a city train. The incident in Manchester Friday night made headlines across the United Kingdom, and Kansas City resident Dan Speir was at the center of it all.

FAIRWAY, KS (KCTV) -- The faux meat industry is showing no sign of slowing down. So, now that the plant-based burgers are starting to show up in local restaurants and in our grocery aisles, KCTV5 News asked a panel of experts to take our very unscientific test to see if they really look, taste and bleed like meat, as advertised.

Wayback Rock For The Troops


Bret Michaels meets with military at Ft. Leavenworth ahead of local concert next month

FT. LEAVENWORTH, Kan. -- Rockstar Bret Michaels is gearing up for a concert in Independence next month. So on Tuesday, he stopped by Ft. Leavenworth to thank some active service members and invite them to come to the show. The lead singer of the band Poison touched down at the post to say hello meet with a training class of U.S.


Kansas City: The Story Of The Sports Architecture Capital Of The World

For more than 50 years, Kansas City has served as the capital of the sports architecture world. And the Midwestern city shows no sign of giving up the moniker, one it originated in large part thanks to the simultaneous projects encapsulating the Truman Sports Complex: Arrowhead Stadium and what is now Kauffman Stadium.

Can tell that everybody already wants Christmas break. People have checked out mentally. Not even funny.

At least a few of these links show that there are still some brain neurons firing out there. Not many but some.

Christmas break? What are we, in elementary school over here?

@6:26AM-Yes, most of the Alzheimer's patients on here have an elemtary school IQ.

"Kansas City: The Story Of The Sports Architecture Capital Of The World"


Call today to purchase your hype piece in our famous highly read magazine. Competitive prices. Our highly trained staff can produce the puff you desire.

^^Ugh. Grow up child. Go find something to do!

^^Ugh. Go jack off to your new girlfriend, Greta Thurnberg. You both have something in common.

Cows have been eating plants since the beginning of time and turning it into beef. Just what are these knuckleheads trying to prove with their plant based burgers? Plant based burgers have more chemicals in them than a can of Drano.

Quick question for 9:28AM-Are you retarded or just old?

Thank Goodness the UK never banned the Speir, only knives and guns.

there are so many bad writers that call themselves writers and somehow get paid, it is Impossible to read most articles.