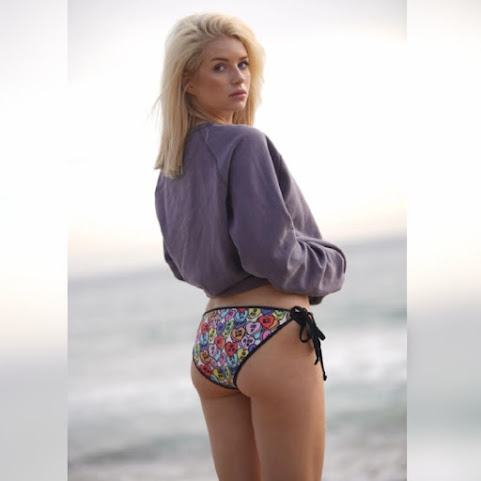 Hottie Lottie is a 21-year-old online modeling sensation and her bikini creative expression inspires this quick peek at the pop culture whilst remembering that Summer is long gone.

Fodors: I Wore Prohibited Swimwear to a Budapest Thermal Bath—Here’s What Happened

YahooUK: Woman fined for wearing a teeny bikini on holiday in Philippines, is swimwear censorship on the rise?

Closer to home, here are some of the nicer and more important news links for right now . . .

A full moon rises over the 1859 Jail & Marshal's Museum in Independence. As twilight deepens on a recent Saturday evening, 20 guests crowd into the historic lockup's front office. It's the first stop on the 1859 Jail Ghost Tour, the annual October weekend attraction that routinely sells out.

These 15 cities are the top destinations from Kansas City International Airport (Code: MCI) that do not have nonstop service. The top unserved markets are measured by the average number of daily passengers who fly from Kansas City to the other cities, despite the lack of a nonstop flight.

KC Guns N Hoses is back for its 14th year, with KMBC's Lara Moritz to emcee the annual event raising funds for the Surviving Spouse and Family Endowment (S.A.F.E.) Fund. This year's event will be held on Saturday, October 26th at the Kansas City Convention Center Grand Ballroom.


Baiting the sharks: How much on-the-spot funding did founders catch at Pure Pitch Rally?

A diverse group of entrepreneurs took home more than $300,000 in cash and services from Tuesday's Pure Pitch Rally at The American restaurant. Emulating the popular TV show "Shark Tank," about 45 investors - or "land sharks" - evaluated presentations from eight Kansas City tech startups and donated $1,000 to one of the companies at the conclusion of the competition.


Kansas City native pioneered a path for women in space

Decades ago, in the middle of the Space Race, Kansas City native Sarah Ratley was part of a small group of women now known by several names - from "Mercury 13" to "Fellow Lady Astronaut Trainees." NASA simply calls them trailblazers.

COURTLAND, Kansas - Rural Kansas has a storied past, but decades of population decline stand poised to turn many once-vibrant places into ghost towns. The struggle for survival reveals itself in emptied Main Streets, shuttered factories and tired-looking neighborhoods dominated by houses built before World War II.


Rain will move in Saturday morning

Temperatures will gradually drop off to about 53 degrees overnight. A front will approach from the west, increasing our chances for rain early Saturday morning. The rain showers might not be out of the picture until 10 a.m. or 11 a.m. Sunshine will gradually return.

Rachel Merlo said would help them “make Kansas City a brighter shining star in the Google-verse.”

^^
No, you lied about being straight. We all know you're gay.