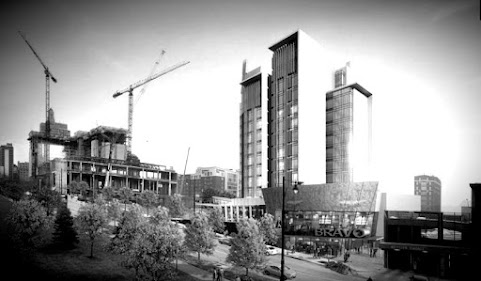 After hours of contentious questioning, the Tax Increment Financing Commission of Kansas City granted developers of a proposed luxury hotel another delay in their months-long quest to get a substantial incentive package for the $63 million project.

The previous two delays meant to allow the developer time to try to reconfigure the financing to provide more money to taxing jurisdictions — the public entities affected by any abatements. However, when the developer came to Wednesday’s meeting, some of those affected taxing jurisdictions had not seen the adjusted proposal that was presented. The development team is led by Whitney Kerr Sr. of Cushman & Wakefield and Eric Holtze of Denver-based EJ Holtze Corp.

Another robbing and raping and looting of the taxpayers project has been delayed.

In KCMO "development" projects, "reconfiguring financing" usually means going underground and staying really quite until the public's attention is distracted to something else, and then going back to city hall and quietly getting what they wanted in the first place.
Don't put your checkbook away quite yet.
Momentum!

Oh, Franky the Foreclosure Fraudy & Friends, were counting on collecting all the big revenue from those giant jumps in property taxes. Sure, they could not care less if granny's home gets snatched away, and other burdened propery owners somehow struggle on or sell under duress--all for the crooks to gift cronies loads of free cash for an unnecessary lux hotel.