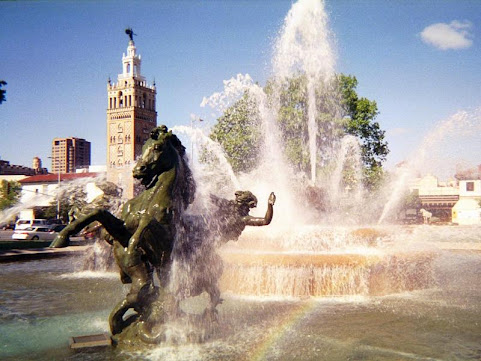 Our blog community BROKE THIS STORY FIRST and now we notice newsies scrambling to follow-up the story with 12th & Oak spin.

Two hotel towers would each extend about 100-feet high. Tall buildings so close to the Plaza have been an issue for neighbors in years past. One hotel would have 175 rooms, the other 138 rooms with 19,000 square feet of retail space and an underground parking garage with 325 stalls.

Developers expect to spend $104 million on this project with $80 million in industrial revenue bonds to be paid over 20 years.

"Developers will make 100 percent payments in lieu of taxes for 20 years until the bonds are paid off. There is no taxpayer funding of the project."

WRONG. That's City Hall propaganda . . . The bonds are financed by KCMO i.e. TAXPAYER CASH supporting development when it could be used to back better infrastructure etc. . . .

A better take from our INSIDER readers:

Entering the grocery business has gone so well for the City, why shouldn't they enter the hospitality/lodging business? Misery loves company?

Why would the City finance approximately 80% of the total project, violate their adopted Chapter 100 policy, and unnecessarily assume tremendous financial risk?

Why would newly elected Mayor Quinton Lucas who campaigned aggressively against generous developer subsidies in areas like Downtown/Plaza not squash this proposal by fighting against it? Has he completely caved to the developers/law firms so soon?

The Sly James era continues thanks to Quinton, Bunch and Shields.

The taxpayers are on the hook for the bonds... if this goes south the city is responsible.

With thugs shooting up Plaza hotels, there's no telling if the project will be successful. TKC, you need to go back and add that hotel shooting link from this Summer. That's what the REAL plaza is like now.

Thank goodness that the republicans aren't running the city or all the money would be going to developers and the 1% of KC.

"There is no taxpayer funding of the project."


Seriously they should be locked up in an insane asylum.

Another wonderful fuck the peoples over job by the City of KCMO.

WHO'S SLEEPING IN ALL THESE HOTEL ROOMS!?!?!?!? SERIOUSLY

^^^ The tourists! They want to experience the vibrant Killer City excitement.

I had no idea that killa shitty was full of gazillionaires that is supplying all this tax money to give to the developers, who knew?

Or is the mayor and clowncil stupid enough to think we are all filthy rich?

Quinton Lucas has no backbone. It was all about the title of Mayor. Now he has that, he cant remember what nonsense he promised or agreed to. Short memories isnt isolated to voters. Politicians have the shortest memory of all.

The millennial mayor only cares about selfies so.....

Chapter 100 Bonds are NOT backed by the City! They are retired by the Developer, who will qualify for an exemption from sales taxes on the building materials. There is no pledge by the City to pay off the bonds. Just the facts.

WHEREAS, the principal amount of the Bonds will be issued in taxable Chapter 100 bonds, with real property tax abatement at 100% for a period that will include construction of the Project and end not later than twenty (20) years after the year in which the Project obtains a certificate of occupancy for any part of the Project.

WHEREAS, the Council wishes in this instance to waive its Chapter 100 policy suggesting the maximum abatement period

WHEREAS.....commensurate with the City’s incremental acquisition of the property comprising the Project, and such property will be leased by the City to the Companies or a Company for a period of not to exceed twenty years following the year in which the Project obtains a certificate of occupancy for any part of the Project (subject to earlier termination as provided in the Lease);

The maximum aggregate principal amount of the Bonds shall be $80,000,000, the interest rate on the Bonds shall not exceed 5.00%, principal shall be payable at maturity, the maturity date shall be no later than twenty years following the year in which the Project obtains a certificate of occupancy for any part of the Project,
---

If this is a good honest business deal, why are private developers requiring the City to acquire the property, finance the project (up to $80M), assume significant risk, and then lease the property back to the developer?

ANSWER: Because they know the KCMO Council is STUPID, financially illiterate, and prone to sell their votes for a few dollars in campaign contributions. They're happy for the City to take the risk, while they reap the rewards.

^^^^^ "...the KCMO Council is STUPID, financially illiterate, and prone to sell their votes for a few dollars in campaign contributions. They're happy for the City to take the risk, while they reap the rewards." WINNER WINNER CHICKEN DINNER!!