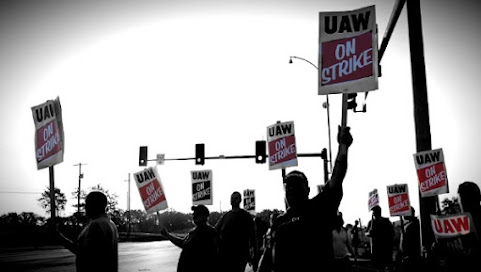 A glimpse at the strike so far and locals standing up for higher wages and more benefits that might hopefully trickle down to the rest of the broke-ass work force . . . Check the best news links so far:

IN THIS VERY HOT WEATHER. SLOW AND STEADY MARCH. EVERYBODY BLASTED THE HORN. IT IS A JOLT OF ADRENALINE. THESE AUTOWORKERS ON THE PK KET LOONS IN 90-DEGREE HEAT. IT IS HOT. IT IS HOT. ABOUT IT IS A BIG CAUSE. WE'RE OUT HEAR FAR GOOD REASON.


Teamsters vows to stand by UAW's side during KCK strike

As members of the United Automobile Workers protested outside the General Motors plant off Fairfax Trafficway on Monday, the Teamsters Local 41 union joined the fight and vowed not to deliver to the factory as long as the strike lasts.


More than 2,000 union workers go on strike at Fairfax plant as part of GM strike

KANSAS CITY, Kan. -- More than 2,000 employees in KCK walked off the job and into a picket line Monday. Members of the United Auto Workers Local 31 at the General Motors Fairfax plant went on strike at midnight Sunday, demanding more money and better benefits.

Talks continue without much progress as workers walk the line for another day.

Interesting to see the turnout. More strikers than I expected which isn't a bad thing. It could go on for awhile.

There are a lot of other cars out there to buy and GM is not in the driver's seat here. People who really want to buy American are turning to Ford and everybody else realizes that it's cheaper to just realize that most cars have the majority of their parts made overseas anyway. The Japanese cars are still amazing at the higher end and Korean cars have better value for the money.

Please eat your import. The union workers striking are benefiting every American who isn't getting paid enough or hasn't had a raise in years.

Unless you want to be replaced by a robot, you might want to think about supporting the interest of American workers rather than the corporations.

Most "imports" have factories in the US, and most "American" cars have a lot of foreign made parts.

I support the strikers, but I love my Kia.

No one gives a shit about this strike, except the strikers.
It will be settled by Friday because it will not draw any more attention.

I was a manager for years at a large multi-national company with a union workforce. I have always supported labor unions and their right to strike. I also support other unions supporting them by not crossing picket lines. What I don't support are the "we always strike" mentality of the UAW. Other unions almost always continue negotiations and try to reach an agreement. The UAW does not. They wait until 3-7 days before the contract expires then target one company. Here is what that strategy does to the workers. First the company knows it is coming so they build up a supply of vehicles in advance. Second they close down the plant which has costs but the workers don't make any of the money they could be making. They lose healthcare benefits for the duration of the strike unless the UAW pays them. Third it is very bad press for the union because they appear to not care about their own members. Fourth the workers could continue to work and make money and get new pay levels and benefits retroactively but no, they lose that opportunity. The UAW is right up there with the SEIU in leadership, or should I correctly say "down there".

"The union workers striking are benefiting every American who isn't getting paid enough or hasn't had a raise in years."

This excerpt from an above post, demonstrates the greedy stupidity of the author. $70,000 to $90,000, with great health benefits, is an income millions of Americans only dream of. You may just lose your ass due to short sighted, union leaders tugging that ring in your nose (to justify their rake off of your dues), providing companies' a huge inducement for employing more robotics.

^^Bitch please! Unions are the only thing that can stem the tide of income disparity in this country. They are solely responsible for the 8-hour work day, the five-day work week, sick pay & family leave, and if it weren't for unions, your 12-year old daughter would be working 15 hour work days down at the factory. If there weren't unions today, how long would it take for corporations to institute 12 hour days, 1% salary increases, and 6 day work weeks? Because you boot-licking toad, they want to...believe that. So how about you take your corporate cock-sucking mouth the hell out of here?

Why u so angry

There will be a day when the strike is busted by bringing in thousands of Mexicans building their other cars at $3 an hour.

1:23 I guess you didn't see the current estimate of 70K to 90K. One doesn't strike against this kind of pay except for butt hurt greed, and no appreciation for a good job. Buy stock in GM so you too can become an exploiter?

General Motors CEO is a Woman who makes 22 million a year, I just want to know when the rest of you bitches will stop complaining how men make more money than you in the work place!! WTF!

1:23 - Where is Jimmy Hoffa? He used to talk shit just like you, now he is missing. Any idea what happened to him and where he might be?