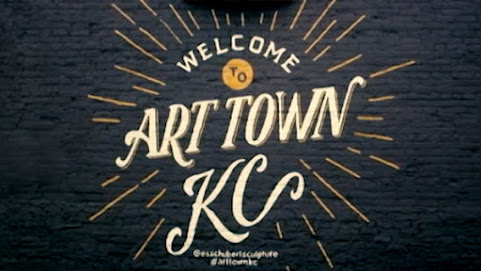 Normally, Dead Tree Media wouldn't have much impact but it's mostly an old school, middle-class crowd in attendance.

Here's the word from an artist sent our way:

"Well, thank you KC Star. You managed to take a really fun event and make it even harder for artists because of your dumb editorial about gun control. The Plaza has always had much better security than the Crossroads but some of my best customers had called to ask about the violence after a misguided editorial this week. Then KCTV5 followed up with more talk about gun crime with the Plaza as the setting even though there has been less trouble this year since the theater shut down. Never seen KC media act so irresponsibly, I guess there's a vendetta against the Plaza and our more established art fair since the Crossroads has had so much trouble this year. That's too bad.

I will say that the rain probably has more of an impact, the crowd was doing well until the afternoon downpour. Still, the local MSM didn't help and overall seem to be a very destructive force for our art community recently."

We noticed the crowd was smaller after the rain but it was still a decent time and, as usual, food & booze vendors sold far more than artists.

And so tonight we dedicate our playlist to the local creative class and the continued artsy struggle in Kansas City.

Spot on about the food fest. That's most KC events though, if the Plaza was smart the would have highlighted places for more food trucks.

I doubt any of this is true.
I asked over 50 people yesterday that did NOT GO to the Plaza yesterday if the reason they did NOT GO was because of scare tactics by The Star.
Overwhelmingly their answer was they could give a rat’s ass about Antonio Brown...

I went.
Looked like the same amount of people as always, until it rained.

12:40 . . . Granny and Gramps are likely the ones packing heat. It's the suburban housewives and activist-age snowflakes that hide in the house.

There's a simple reason for the imbalance in sales - the Food and Booze are GOOD, an are something worthwhile!

A piece of "art" making its twelfth appearance at the Plaza Art Fair can't compete.

It used to be a nationally recognized ART event that was taken seriously.

Now it's been turned into a shit hole lowest common denominator street circus like everything else the former clown suited Mayor and his idiot crew put their hands on.

I remember when there were no food trucks at all during the PLaza Art Fair. If it was me I'd ban the food trucks and return the Art Fair back to what it was for so many years before. Plenty of places to eat at or near the Plaza without the food trucks. If I was a restaurant owner located in one of the Plaza shops area I'd be major pissed that an event being held and allowing the carny type food trucks to set up and take business away from me.

Well, I went Friday and it was worth whatever risk the Star was talking about. I ended up with a married slut from Joco and fucked her half the night.

The star and the murdeous blacks ruin everything, but mostly it’s the murdeorous blacks, nobody cares about the red star anyway.

The KANSAS CITY ATHEIST COALITION did not show up with their hate signs. All talk. No action.

Grew up in johnson county. Spent 4 months in south kcmo while my home was
being updated. I can tell you that kcmo is a hole. The sirens run from 10pm til sunrise. Crime everywhere. Beggars on every street corner. Troost/Holmes/wornall are shit street with old worn out businesses. The good people who remain were friendly but the area smelled really bad. Infrastructure was 100 years old. Eventually they will have to stop tap water as the water smells funny from the taps. The water left a ring in the glasses and I can imagine a 'FLINT, MICHIGAN" event in kcmo. Just overall the city is in bad shape. Friends now say that joco offers everything they need and they will not travel to missouri for anything (except the chiefs). Overall the city is failing. Heard ads for vacancies in Light one and two apartments as people are leaving the downtown area. South kc is declining although you see a breath of hope in red bridge area. Price Chopper at 78th and wornall is not only filthy but a hole. KCMO, like other cities is dying and eventually will crater as their problems continue. Crime puts kcmo as the murder capital of the nation in top 5rankings. God help kcmo. Plaza is a mess. New owners probably paid too much for it and with the area being surrounded by crime in the west plaza area (its gotten so bad there that residents patrol the area themselves). GOD HELP KCMO. The thieves got their airport and hotels but the rest of the city is rotting away.
GLAD I'M BACK IN JOCO......will never travel to kcmo again.

And yet I WAS there, and YOU people weren’t. Place was packed to the gills. Weird.

Oh Chimpy. You were in the zoo as always!

^^^ Shit Chimpy, Mommy hasn't let you leave the Basement since that "problem" with the little Girl next door, so how the hell could you find your way to the Plaza from 23rd & Denver?

After having to work it for more than twenty years, it was clear that traffic was down about 50%, and only one thing does this, the weather. I would like to know who Greta van Fleet is, and why all of these lard-assed fifty year olds from Johnson County were wearing her t-shirts.

There is a reason Granny and Gramps lived longer to enjoy their lives. Being younger and dumber wasn’t one of them.

It was in his dreams.

"Evar" vice "ever" in the title. Sure, I know what he meant, but I expect journalists would have mastered baßic English.

Btw, I think this is TKC's poor excuse for humor.

Used extensively on the internet to mean "within the last 10 minutes."

It was great last night! Weather held up, Rattle & Hum was terrific, The new Capital Grill was packed, young women everywhere. Not one miserable geezer anywhere!!! It was fun!

a blog that makes you despise this town as much as any other 'news' outlet. Capital Grill, the epitome of KC sophistication for some of the dolts in the community.