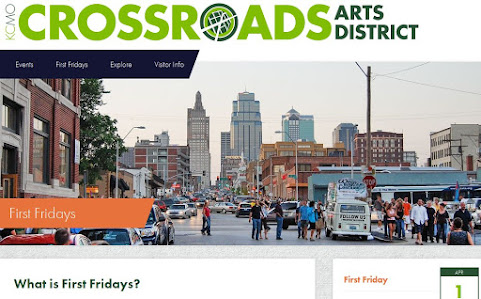 Politics and developer excuses don't provide much comfort the morning after a tourist commerce disaster that's the result of a tragic murder.

JUST WAS WE PREDICTED: NOBODY CARES ABOUT ART AND THE STREET FESTIVAL & FOOD TRUCK SHUT DOWN CHASED AWAY THE VAST MAJORITY OF PATRONS!!!

We reported that only about 1/3rd of the typical crowd remained BUT more skeptical readers have sent word our way claiming that the damage was far worse. Possibly a crowd less than 1/4th the size of the usual gatherings.

HAS DEADLY GUNFIRE FOREVER RUINED FIRST FRIDAY IN THE CROSSROADS?!?

The preliminary results seem to suggest as much.

But here's what our most dedicated readers had to say about it:

"You can't really blame people for staying away from a murder scene. But the people who did venture appreciate the experience far more. What we need to watch is if the businesses can still earn a profit, after all it's hard taking away their biggest night of the month and cutting it down so dramatically. Honestly don't know if we want KCMO getting involved. That was why the event got so out of control in the first place."

"The decline in attendance is probably the best thing that could have happened after such a horrible tragedy. The focus should be on healing for her family and friends and in the future I hope we take public safety more seriously."

"There were fewer people but that is to be expected, I think we need to see if the mayor & council will pay up for the higher insurance and if the food trucks will be allowed back. That will help the event somewhat and I think the future is a smaller & more closely connected neighborhood event. That is not a bad thing. "

"First Friday started as an arts event for the actual artists and galleries in the Crossroads. They lost control, it became a mob scene, and bad things were sure to happen. If the crowd that's disappointed with the current policies needs to come downtown so badly, there's still the excitement of axe throwing and the opportunity to go to the P&L District and get wasted and puke on your shoes."

Yeah, it was pretty desolate but that was to be expected. If this keeps up into next month, then it might be a problem.

Don't forget that the colder weather is coming and that is going to cut down on traffic as well. Not a good thing for the people actually trying to make a living in the crossroads.

wouldn't worry about that too much. Most of those businesses are loss leaders or funded by mommy and daddy. The building owners are the people who are really in trouble.

They can pay their own insurance.

Black people kill, so..., the obvious thing to do, is BAN Food Trucks.

America is so politically correct that we are now, completely Dissociative.

BAN this, BAN that and keep telling the wet by every rain, blown by every wind, low information Progressive, that if we do, everything will be ok and, as an added bonus, the ever present, behind every bush and rock threat of White Supremacy will end.

It's Orwellian. The Main Stream Media (Read: Ministry Of Truth) repeats every day, every minute every second, that "Good Think" Progressives (Oceania) must fight every day against the ever present threat (That does not exist) of the Evil White Patriarchy - so - BANNING (Read: "Controlling") every aspect of our lives by our "Good Think" superiors in the Federal Government (Read: Deep State/Progressive/Fascists) is what is needed for a happy life in "Metropolis".

If a Progressive's lips are moving, the he/she/it/Alphabet People are lying.

The Crossroads crowd is smaller, because of the threat of Violence from Black Thugs.

The Black Thug issue will NEVAR be addressed because of the threat to politicians who achieve station, based on the Black Block Vote.

The Black Block vote for Democrats is only sustained by the continuation of the "Narrative" which is based on Anti-White rhetoric, Victimization handouts and assigning blame to ANYONE for crime, besides the actual black criminals.

Your comment is very racist Chuck and you should realize that all black people do not kill. In fact, black women are the victim of violence more than any other group in this country. They also very rarely commit murder even in a percentage comparison. Far more white women kill than Black women. Your statements are unhinged and wrong. You're just spewing hateful comments in support of the Republicans and they could care less about you.

I have read a lot of your comments and they seem somewhat knowledgeable but lately it you're falling into an abyss of hatred. I hope this isn't typical of most trump voters.

From a Lee's Summit resident.

I thought the Crossroads was supposed to be some kind of world class sophisticated gallery district.

^^^ According to who Richard Florida?

Violent black thugs are, whether you want to admit it or not, destroying not just one, but several shopping areas all over this city.

We have around 100 murders so far this year. That is a stat that is available, the stats on rape, assault and robbery, in my opinion, would reflect the same amount of violence and destruction committed by blacks as the percentage of murders.

Take off the rose colored glasses and face the truth.

Progressives are victims alright, they are victims of the Dunning Kruger effect. Brought on, by willful impercipience, after years and years of being "Dumbed Down" by the liars in the Main Stream Media.

It just is what it is.

Stay safe in Lee's Summit, I am going to work.

Chuck just telling it like it is and to some the truth is to hard to understand or they simply won't try and understand.

What the hell happened to Super Dave, he is missing in action?

Why not just change the URL to stormfrontkc.com and get it over with for Christ's sake?

All of ex mayor SLie's failed feel good organizations should gave been banned from Friday's event. They made it difficult for like minded people to view, enjoy and purchase the art. Huge distraction and very evident the event needs to do more downsizing.

No one is required to read this blog !

Most people are clever enough to understand risk and avoid it. There is a reason why people do what they can to avoid putting themselves in harm's way. This is why public mass shootings and random shootings of any kind have the psychological impact they do -- violence in unexpected places causes us to miscalculate the odds of attack. While this random act of violence isn't likely to be repeated, the current risk/reward ratio remains skewed in our minds and time will be required to readjust our risk prospective to something more rational. I'd suspect that it will take three first Fridays without incident to bring back the crowds. All bets are off if it happens again, however.

Hey out in lees summit, stfu, you guys got suckered bigly by a racist black superintendent who did exactly the same thing in Hickman mills, combined he made $1,000,000 dollars off of saps like you. I bet you moved to lees summit to get away from the murderous negro to begin with didn’t you! Hahahahaha!

9:35 I don’t see any of those comments in his posts, why do you constantly make shit up? You hate chuck and white people so it’s very clear that you are racist.

By the way bLIEron, we know you’re posting on here without using your name, your posts all easy to spot for all the lies you try to spread.

And It’s ok for the koloreds to “embrace black power”? One can’t be racist and the other not so.....

Thank you for including my comment. I don't buy all the racial crap. T this should be about how KC can more effectively help small business and not stupid politics. We need to move past that so KC can get back on track.

Stick a fork in the Crossroads, it's done.

The neighborhood is doing better without a near street riot every month. If you think it's so great, why don't you have it in your backyard?

Because any acknowledgement of black crime equals the third reich!!!

The Crossroads is a neighborhood garage sale that thinks it's the Louvre.

Yes over 100 murders but 3X that many shootings that apparently do not count.

To the idiot in Lees Summit - yes black female are the victims of violent crime committed by Black males.

Black makes between the ages of 14 and 30 make up about 3% of the population but commit about 50% of the violent crime.

It is a black problem that will only be solved once we and BLACKS admit that Blacks are the problem. AND only Blacks can solve their problem culture. If they are unwilling or unable to acknowledge this and change their culture then something else needs to happen.

I don't think we can change American history. But can we at least let the food trucks back in? That would be nice because they never really hurt anyone.

I GREW UP IN JOHNSON COUNTY (PRAIRIE VILLAGE/OVERLAND PARK) AND MOVED
FOR 5 MONTHS TO KCMO.
NOW I AM HEADING BACK TO MY HOME....JOHNSON COUNTY.
KCMO IS NOW FILLED WITH BEGGARS ON ALMOST ALL STREET CORNERS.
THE AREAS ARE FILLED WITH TRASH AND THE CITY IS FALLING APART.
MAIN ROADS LIKE WORNALL/HOLMES/TROOST ARE LITERALLY FILLED WITH HUGE POTHOLES THAT COULD EAT UP A CAR. THE ENTIRE AREA IS FALLING APART.
WHAT'S LEFT ARE RESIDENTS WHO HAVE BEEN CHEATED BY POLITICIANS.
KCMO SMELLS BAD. THE INFRASTRUCTURE IS BEYOND REPAIR. THE ONLY PEOPLE
LEFT ARE LEFT HOLDING THE BAG AS THE CROOKS RAN OFF WITH THEIR TAX DOLLARS
AND LEFT THEM WITH CRIME. NOT A NIGHT GOES BY WHERE THE SOUNDS OF POLICE SIRENS DON'T FILL THE AIR FROM 10PM TO SUNSET. TAKE CARE KCMO...I AM LEAVING. GOOD LUCK. YOU WILL NEED IT!

Looks like you meant to reply to 9:37. And, 9:37 is most likely bLIEron, or a similar racist. Funky is a foolish white apologist,too.

Chuck is 100% woke. He speaks truth to power. The Progressive PC warriors need to hear it, soak it up and understand reality.

Then again, maybe the crossroads was just dead because of the I-70 shut down...

Hey9:13 are you fucking ignorant or just stupid. Do you in your liberal leftist pathetic stupidity actually think patronizing these worthless stinking niggers will stop this shit these animals are committing. Panty waist fags like you are the reason why these apes think they can get away with this shit. Do you fucking morons actually think trying to be nice to these greasy savages will alter their behavior into something we can tolerate? Well I hope when the great race war arrives you weak sniveling traitors will be the first ones the savages kill after all you fags are afraid of guns so run home to mommy and shit your pants now