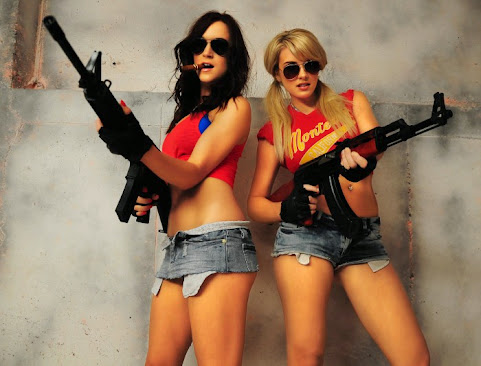 Here's a really great alternative perspective which offers a just a bit of optimism for small biz and maybe welcomed specialization because shopping for tube socks & cereal amid a gun parade doesn't really make sense . . .

"Walmart caving to the liberal mob which generally despises Walmart and their customers will actually help the mom and pop gun stores open back up. They couldn't compete with the low profit margins Walmart could get away with and the majority closed their doors. I think we’ll see many new gun shops open up over this."


Yep Walmart is caving to the demonic democrats so I headed in to my local Walmart to get plenty of ammo yesterday for my 9 mm rifle that they are trying to ban too.

Background checks for ammo are on the horizon if the Demoncrats win in 2020.

Hell Gun Trucks could be the new thing. Like the food truck thingy.

This is actually great news for local gun shops.

The guy who owns "Tactical Advantage" in Olathe knows his stuff!

He is the best!

Gun dummies are the worst. I'm not sorry you have tiny dicks and can't fuck. Buying more guns to overcompensate for your "short" comings won't help either. Sorry, not sorry.

And a sign that you're thinking about other dude's dicks doesn't speak well of your own manliness. I'm truly sorry for your wife. Send her over.

How about "camera dummies"?

Guns play the EXACT same role in shootings that cameras do in child pornography, only the special kind of stupid that permeates the democrat party can’t grasp this simple factoid.

Crime is NOT caused, it is committed. The gun didn't do it. Taking away guns, from white people, will increase criminality and leave the electorate "Hong Kong" helpless in the face of the rising, Progressive American Imperium.

Keep your guns - keep them loaded and keep the faith.

Chick with a dick.

By all means support your local shooting range and gun store.

Using a gun in crime gets you life in jail. said...

WalMart will shortly see what a huge ass hit their sales are going to take just like Dicks did when they went all anti gun.
Gun owners support their right to bear arms and will boycott any business who goes stupid in this gun rights issue.
When gun owners start spending their money elsewhere and not at WalMart you will see WalMart quietly change this policy back to what it was.
I swear when are people going to wake up and see it's a people issue and not a gun issue.
So sad our courts are such pussy's who won't force laws that are on the books to be adhered to.
So sad our lawmakers won't make it federal law that using a gun in a crime gets you a 50 year automatic sentence in jail and kill someone with a gun gets you life and no parole at all in each case. No insanity pleas no fucking nothing, you will do time no matter how lame the local prosecutors or judges are.
People shouldn't be pissed at guns, they should be pissed at our local representatives who are all so lame and not worth a plugged nickel.

^^Umm no it won't. I thought Dick's Sporting Goods was going to go down the drain when it dropped guns? It just reported it's best earning quarter ever. You people are on the wrong side of the issue. The country has moved left on gun control. You need to face it. The companies are only following the public on this. This is only the start. Maybe get out of your echo chambers once in a while and see what's going on in the real world.

^^Not so you assclown.
Well, well, well.....that gun policy hasn't worked out for you, has it? Dicks Yoga Pants....the better title....and more fitting. I took my hunting and fishing business elsewhere to Cabelas and Bass Pro after the gun policy was announced. Now, I travel 20 miles out of my way to avoid Dicks Yoga Pants.

19:01 it hurt them and hurt them bad and no matter what trivial trash you claim to know about will change that which was reality.

^^Umm hey retard: Maybe do what 10:01AM and said and leave your shitty little world and see what's going on in the real world. Oh, and one more thing: It did not hurt them whatsoever!!!!!You just got knocked the fuck out!!!! Read it and weep you dumb fuck!!!

^^This is no different than any other company just beating lowered estimates and Wall Street thinking it's the greatest thing.
Happens all the time.
I'm surprised by how much bounce we're seeing in retailers that had good results (Target, Lowes, Dick's). The market is revealed to see the consumer still spending but 10% up seems like a stretch.
When you learn a little about how retail really works you can then make comments instead of copying and pasting stories by off the wall writers who are gobblening foo foo information from certain retailers.

^^Sorry charlie...you got fucking run!!!! You ran ignorant, got called on it, and got knocked the fuck out!!! Simper off now

@11:47(aka stupid dave) Stop. We all know it was you that posted that bullshit at 11:24 and 11:47Am. You forget, you write like a retarded 1st- grader with that broken syntax. Own your ass kicking. Next time, do a little research before you call someone an assclown, assclown. It saves you from making an even bigger ass of yourself in your subsequent posts.

^^Looks like your writing 12:05. No really, I wrote 11:47 which is all copy and paste from the comments section in one of your links you provided above. So it's you who just got knocked the fuck out. So who is the retard now?

Chimpy! Stop flinging poo at those smarter than you, which is of course everyone. Stick to what you know! Poor dumb chimp. Lol

I'm going to go on record and say that stupid dave is the retard now. Hope this helps!

^^Copy that! Ditto for me too.

Concur. Dave is the retard.

Agree. Dave is the retard.

12:16 to 2:08 You ever get tired of answering your own posts all day?
For the record Dave is down at Lake of the Pines pre-fishing for a tournament so I'm about 100% positive he isn't posting anything here.

I've clicked through a few of those "People of Wal-Mart" slideshows. Keep guns as far away from those freaks as possible.

You idiots all need to find a hobby, plain to see you have way to much time on your hands or else the boss hasn't caught you fucking off yet.

Dick's has neither tanked or set the world on fire. They just had a solid quarter after a far more disastrous one in May. Shares have trended down and they certainly didn't participate in the Trump bump. They also had to close a lot of stores to shore up their balance sheet. I suspect Academy and Bass Pro/ Cabelas ate their lunch in the outdoor sporting arena and have left them with little to sell but gobs of crappy sport "fashion". A few nice brands at full price and lots of crap. I wouldn't put my money there and they have nothing I can't find elsewhere if I want it and the bit of good stuff can be had cheaper elsewhere. They may have a much rougher time under the China tarriffs.