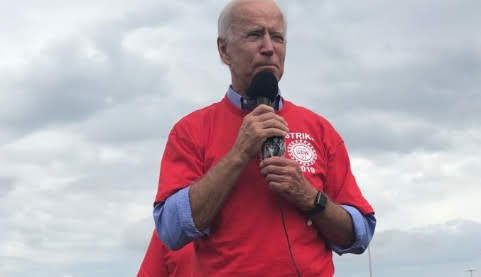 The leading Democratic Party contender for Prez in 2020 spent the afternoon in Kansas City talking with local workers putting their livelihood on the line in a collective bargaining dispute.

Fox4: United Auto Workers strike against GM may be headed to day 8

Warren for the DNC win.

And that sucks because it'll be a repeat of 2016 with Trump taking it back.

Biden is the safe bet. He will get the nomination or steal it and take most of the union states back from Trump. No more Michigan, no more Pennsylvania.

The election is really only about getting 5 key states.

So you're looking at the next president.


Hey Joe want to smell my neck and rub my body?

Tony Botello: so lazy he couldn't be bothered to spell out "former."

What did that save you, two seconds?

Sleepy crooked joe and his thievin son, that’s a perfect description of a Democrat!

Just checking, does sleepy crooked joe even know where he is! Hahahahaha!

If you liberal traitor clowns out there think any of these worthless idiot leftist climate change socialist democrats can beat Trump ,you grade schoolers are sadly mistaken. The criminal leftist on stage engaging in their mindless debate on subjects straight out of grade school special ed is comical to real Americans. In fact it was so idiotic I couldn’t bear five minutes of it. How in the hell any of these morons got out of junior high is a mystery to me. Joe McCarthy must be rolling in his grave after trying to eliminate these traitors from our country just to see them on tv in prime time. God help us if any of these sick psychotics through stealth , lies and voter fraud ever gets into a position to destroy the country why do you think they want our guns? That’s the only thing standing between us and the criminal democrats

And then there are those uneducated idiots who think Trump is the man. He lies, cheats and steals. Has not an ounce of compassion, knowledge of government of kindergartner, Only does things to self promote. Really doesn't give two shits about anyone but himself. Not a true leader. Just look at leader quality. Blames, and only takes credit for things he thinks are good. Doesn't back up his staff, can't even refer to his son as his son, only his wife's son.

First, of all you GM workers are not thinking about...The Green New Deal will kill GM. No GM, No Job! Can't have it both ways. Democrats are pushing the GND, they are not your friends. Walmart and Amazon have openings and pay $14-15 per hour.
Second, you could have said "We want to continue working making the UAW big bucks and get a settlement retroactively, that would have been a win-win for you and GM, BUT NO, the UAW is a union that "ALWAYS GOES ON STRIKE!". That hurts your families...don't you idiots ever consider anyone except yourself?
Third, You have one of the best paying jobs in the world for unskilled labor, let me say it again, UNSKILLED LABOR! You do not have a higher education, maybe high school and you act the same way, stupid. As the future auto goes down the assembly line your job is to put Tab A in Slot B, period. Get back to work you idiots.

^^^^ Who could get you a better job ? Feeley Joe or Businessman Trump ?

7:36: It does no good to point out Trump's flaws to his fans. They are and will remain ignorant and proud of it. We'll just have to hope there are more of us than there are of them this time and that the electoral vote will match the popular vote.

Nothing wrong with this country that can't be fixed by more fiery rallies and selfies.
What are the activists protesting tomorrow?
Mindless entertainment.

7:53 and you voted for Hillary too didn’t you, are you capable of admitting that her flaws greatly out number President Trumps flaws? How bout Barry’s major flaws?

This group of dummocuck contenders is tragic, that’s what your worries should be about, Trump will win again and beat the worst group of contenders this great country has evar witnessed. Truly and I mean truly sad.

If you are a Democrat, you might as well tell the whole world you are a faggot and love to suck cock.

American Voters are Smarter than you think. Sleepy JOE was the vice president of One of the most corrupt and worse Presidents in History. Biden made shady deals with the Ukraine .Along with his son.And the Obama corruption will be released in the A.G.REPORT IN A COUPLE OF WEEKS

P.S. The Bible says that a man is supposed to marry his brother's widow.

Which is it ps true or biblically correct?

Hunter Biden just broke up with his brothers widowed wife after two years of dating, they started dating just after the brother died. They broke up because sleepy joe didn’t want the awkwardness of the relationship being brought up during his current failing run for President so.....

Kinda reminds me of the time when sleepy crooked joe had the Ukrainian prosecutor fired after he threatened them with not giving them a “1.5 billion dollar loan” wink, wink. The prosecutor was going to charge creepy joe, his son and Hillary with a crooked deal that made them filthy rich.

Breaking News Sleepy JOE is dropping like a rock in the poll New Poll Ninety Million Voters do not want socialism. WHAT IS A DEMOCRAT TO DO.

I use to like Joe from hard-scabble scranton, PA...use to. He is a shadow of his old self. Too scared to run against the hilda beast, graft with his son, a quisling for the sjws, face lift, and going senile. It breaks my heart to see him like this.

You can define Union-leaning Democrats by the fact that they're supporting candidates whose goal - not just clearly stated but shouted from the rooftops - is to eliminate their jobs.

Green New Dealers mimic the dumbass views of their patron saint, Al Gore. Years ago, in his hilarious book, "Earth in the Balance," he called the internal combustion engine the ultimate threat to humanity.

So . . . go for it, UAW members. Maybe Yang's guaranteed income/freedom dividend will equal your current salary . . . but I sorta' doubt it.

Did Pervert Joe feel anyone up while in town doing his socialism light tour ?

Hay Joe wait till the taxpayers go on strike.

These comments are funny. Total projection by Republicans. We live in an idiocracy.

Being a mark for a grifter must suck. It's certainly something Republicans don't want to admit to, which would explain their never ending support for a crooked POTUS.

^^^It's the electrolytes they've been drinking.

Who said I was Repub....seems like now Dems are saying it's OK because someone else did it too. I have standards that apply to...both parties.

Sorry, all I can hear is more butthurt. You lost. Get over it.

Isn’t the demmocrims responsible for gm building plants outside the us because of the heavy environmental standards they enacted? And aren’t they the ones pushing the green new deal to eliminate cars because they use fossil burning fuels? The unions might want to be careful who they vote for next time.

get Biden out, let's go with Warren

Between Creepy Joe and Governor Grandmaw sucking up to the UAW they must be desperate to get those rank and file Union votes back that went to Trump in 2016...

Biden, Warren and Democrats in general are for creating good paying manufacturing jobs and are willing to talk to the workers.

Meanwhile, fake populist Trump continues to ignore workers and his promised agenda to help raise wages and create good jobs; and instead lines his own pockets and incoherently tweeting about his own victim-hood. Sad.