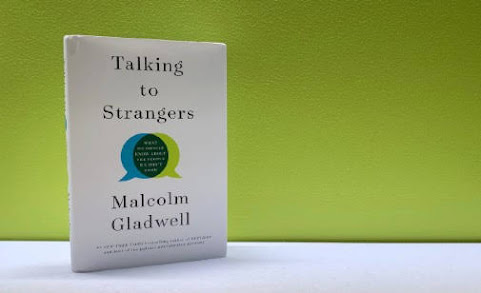 Tonight we consider a #1 NYT bestseller which contains a worthwhile and newsworthy passage that explores the history of Kansas City police tactics during a deadly high crime crisis.

If our readers talk to smart people about important things, they've likely already discussed this book . . .

Talking to Strangers: What We Should Know about the People We Don't Know

HOWEVER, for those willing to read beyond the cover and the few chapters like most middle-class faux intellectuals there's a great examination of KCPD history.

A very smart reader sent us this snippet of a review that sums it up nicely:

"During the 1970s, there was an experiment conducted in Kansas City, Missouri, which found that increased police patrols had no effect on crime. During the 1990s, a similar experiment, again conducted in Kansas City, instead targeted extra police patrols in very specific high-crime areas - and by very specific I mean city blocks, not streets, blocks. That experiment was incredibly effective and demonstrated that stopping individuals for very minor traffic infractions led to an increase in arrests, gun seizures, drug seizures, and, most importantly, crime.

"Law enforcement agencies around the country took notice; sadly, they walked away with the wrong lesson."

Mainly, readers and Mr. Gladwell seem to suggest that the targeted approach can often be misdirected against nonviolent communities and has regularly resulted in tragedy.

Another bold TKC reader reminds us of the big picture and how the history of this town's policing and how anti-crime efforts have evolved:

"KC is the first to crack down specifically on neighborhoods and set up a school to prison pipeline along with computerized policing. Other cities followed our lead and copied tactics. Very much like Chief Smith saying weed dealers are killing people as a distraction while licence plate scanners are making people think their hood is full of snitches because locals have little understanding of the speed of automated surveillance."

Back to the book:

"Gladwell points to the success of the Kansas City Gun Experiment, a major first step toward the reduction in urban murder and drug-crime rates. The experiment itself was conducted by four police officers over 200 days and violent crime in this Kansas City police reporting area halved. The four officers also issued 1,090 traffic citations . . ."

Accordingly, all of this info should remind Kansas City residents that authorities and elected leaders have diligently searched in vain for a solution to the statistically significant and disproportionately higher local violent crime for decades and still continue to look for effective strategies given that the 2019 murder count is still up 13% over last year.

One of his better books, it's thoughtful and contains a lot of practical advise for avoiding preconceptions about people. This kind of scholarship is so much more beneficial to KC than all of the motivational books the local authors seem to be selling endlessly.

Stop & frisk is the solution. Proven effective time after time.

Idiots. It's guns, look at how many guns we have in this nation and look how that correlates with the homicides rates. The more guns, the more murders. If we really had a "Gun experiment" it would involve getting deadly weapons out of the hands of people who don't have them properly registered. THAT is why at least Mayor Lucas is doing the right thing in trying to take away guns from minors and drug abusers. He's on the right track.

BRING BACK STOP & FRISH EVERY WEEKEND!

@8:20pm
It's odd that the gun laws are the same throughout the state of Missouri and throughout the entirety of KCMO.
Yet the vast majority of crime, violence, and homicides takes place within around a sixty square-block area in the urban core.
There must be some other variables to the violence mystery.
Take some time and arrange a ride-along with officers in East Patrol.
Sign up for the dog watch on a Friday or Saturday in the spring, summer, or fall.
The shift goes from 7:30pm to 6:30am.
Be sure to stay the whole time.
You just might discover what some of those variables are.

^^^^^ Idiot republicans make the same argument all the time but you're talking about empty fields vs. population centers. Crime happens where people live. Your rural comparison falls apart and is not worthy of consideration.

Let's confiscate donuts and see how that works. I know many cops who want to get their coworkers up and around who would support this ban!

Traffic stops are just harassment of poor people, we don't need another revenue scheme in KC. You shouldn't be taxes for driving just because of where you live.

Well, I'm glad that I don't live in KCMO. Sorry, not sorry.

Sure 8:20 look at Chicago much stricter gun laws than we have and it isn't working there. Stop and frisk is the ticket needed in this town along with someone besides Worthless Jean to see they go to jail and stay there. Gladwell is correct and shows the plan we need around here.

Kansas City and many cities have had the answer to fight crime better than they do now it's just the liberal whiners always start bitching anytime any real police work is started. Good law enforcement isn't pretty but a necessity.

Any serious crime fighting plan should begin with getting rid of our worthless prosecutor, Jean Petersucker Baker.

Don’t most of our murders involve one hoodrat killing another hoodrat? Why is that considered a problem?

It’s also odd that most of these crimes in KC are committed by a group of a certain ethnic persuasion. It pretty much is the same in St. Louis. Just look up the stats (which I doubt you will). The number of known suspects of this ethnic group outnumbers Caucasians almost 9 to 1. Sorry libtards but you ‘blame the gun’ or ‘white privilege’ narrative doesn’t work.

I'm sure my dumbass world view is the solution to a problem that a lot of smart people haven't figured out yet. That's why I'm posting it to a blog in the middle of the night.

I know the answer said...

8:48 your an idiot, there are 6.128 million people in Missouri and about 700,000 thousand in two cities where all the murders are. You are too stupid to admit that all the murders happen in two places, killa shitty and shitty Louis, yup, the two dummocrap cities in Missouri.

Stop and frisk used to work well. With the current Missouri gun laws there is no point. Unless one is a felon, EVERYOONE over 19 and anyone 18 with the most tenuous military connection can carry guns concealed and in the car. There is no crime ergo no arrest.

The real Kansas City experiment is the school district one from the 70s where they spent millions and millions of dollars and updated every school in the district to see how much money affected graduation and academic performance and the results were it doesn't affect it at all. That's the one that needs to be talked about