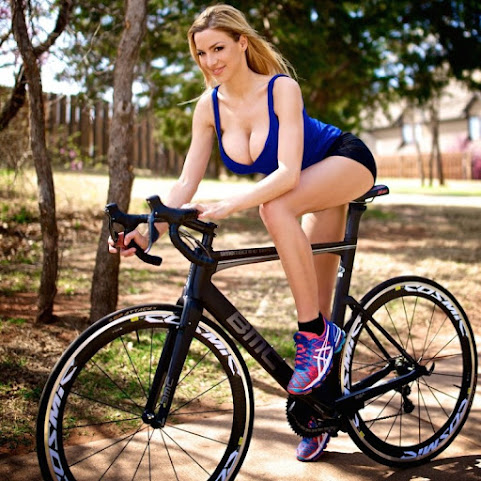 Bike/Walk advocates often include "urban core needs" in their proposal to build more access for local bikes across Kansas City.

But now, just like hottie Jordan, that questionable premise deserves a second look . . .

Read betwixt the lines and notice that some of the most dedicated stakeholders simply don't see the need for bike lane designs that would ruin otherwise beautiful streets in their community.

A plan to provide more public housing in a northeast neighborhood is getting a boost with $5 million in federal funds.

The money will help pay for reconstruction of the intersection of Martin Luther King Boulevard and Independence Avenue. The plan calls for new sidewalks and a cycling lane at the intersection in addition to turn lanes that will help with traffic flow.

However, some residents are questioning the need for bike lanes. They think that building one here would force the city to make a bike route all the way down Martin Luther King Boulevard.

Never seen a cyclist that good looking in KC.

Why do the people along mlk get a voice in the bike lane decisions, nobody else does. Don’t get me wrong, I think it’s great that they shut’em down but damn, everybody else should a say so as well.

Bike/Walk KC is a mess! They came up with THEIR plan, with minimal public input because they are arrogant and self important. They epitomize poor leadership. Hating cars is the base of their motivation and it has backfired.

I live 2 blocks east of MLK Blvd/Paseo. I want a bike lane on Paseo.

they just wanna keep parking in the street

Eric Bunch is still listed as working for BikeWalkKC. If he's receiving any compensation from them while serving on the City Council--especially as Vice Chair of Transportation, Infrastructure and Operations--it would be a major conflict of interest.

This bike lane nonsense must immediately stopped so taxpayers money is not wasted. Kudos to the neighborhood leaders. The residents of Northeast already have busses, taxis, vehicles, scooters, friends, hitchikimg, Uber, walking and Esclades as forms of transportation. That should be enough.

Take them off of Benton Blvd too.

Bikes and cars have coexisted for over a 100 years. What the hell changed ?

The Paseo and Independence Ave. and Prospect are the very places bike lanes are needed the most.

It's so cool that you redneck fart sniffers can comment all the way from Lone Jack but many people on the east side don't have cars. They can't afford those big'ol dick extenders that you dudes drive.

Good God it must be the Apocalypse! There is someone saying Bike lanes are bad. WOW!

9:34Pm I live on the Eastside. I’m sure you’re real concerned about us folk living on the Eastside. We’re not poor and I know our purported poor-ness aids the narrative for more bike lanes, except the fact that poor people don’t ride bikes. That’s not a value we have over here. That’s how you know the whole “lets install bike lanes - the poor need them” media blitz fails. Ask a poor person what they need most and bike lanes isn’t even in the top 1,000. White people always using the purported disadvantaged to further their own selfish narrative. I own my home free and clear - nobody gave me anything and I wish the City would eliminate the bike lanes on my block - and BTW I am not poor. I may not be making 6 figures but mostly all of my bills are paid and I have relatively low debt, and extremely high tax bills for someone who lives on the Eastside. Don’t create more problems for property owners.