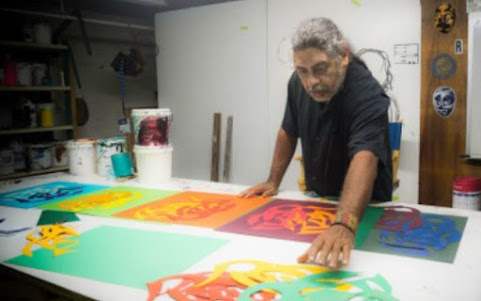 Joe Faus is not only an advocate for the local Latino arts community but also one of the indisputable leaders of the Kansas City creative scene in both the Westside and The Crossroads. His countless years of volunteer work, community involvement and local connections have earned respect throughout the metro.

In a recent social media post, in a very reasonable and statesman-like passage, he gently asks a local institution to reconsider their affiliations amid an immigration controvers .

"I have for years been associated with the Kemper Museum. It is an institution I have come to respect and from which I have drawn a lot of inspiration. I have been involved in an innovative art-mentoring program through the No Boundaries initiative and facilitated family art activity days that have brought Latino families under the welcoming canopy of the museum lobby. I am also aware that some of those families fall under the undocumented umbrella.

"I am grieved and conflicted to find out . . . Some trustees of the Museum and the connections to a private prison in Rhode Island.

"In good conscience, as a person who has felt and experienced the uptick of anti-immigrant sentiment in the last two years, any compromise of solidarity only diminishes us. I ask the board of trustees to address this issue. I ask UMB to reconsider, as other institutions such as Bank of America, have done and cut ties with these organizations."

Asking people to part with their money is always a tense proposition. Divestment strategies are hard to get a win.

I wonder if more artists will take this stance? If any artists will refuse a showing at kemper because of it?

Really doubt if your low brow audience will understand much about art but I admire your effort TKC.

Very interesting and I only agree that at least Joe is not a bomb thrower but obviously somebody who is considering the situation carefully.

With respect for Mr. Faus, I would simply highlight his use of the terms "undocumented" and "anti-immigrant."

I don't believe he's speaking honestly on this issue. He is certainly free to express his opinion and argue his points, but could he please be more precise with his language?

Everything about Kemper is elitist. It's better off if the local arts community finds another venue. They are a legacy of the old KC. Forgotten.

Here is a newsflash for you: Mariner is richer than you either way.

^^^^ Finally, I think we got a real winner. At the end of the day your broke asses should remember that your opinion only matters if you have money to back it up.

^^^ Is that why you're here Daddy Warbucks?

Sadly Jose was not keen on accepting a little constructive criticism and so took down a comment by J. W. Jeff Helkenberg.

Jose is playing his part in a political theater. He may be doing so as an NPC, programmed to speak in a particular way. But he lacks self-consciousness. He is just another "Orange Man Bad" flamethrower.

Who is Jw? Never heard of him

On the horizon...More starving artists!

helkenberg can go pick tomatoes at one of the buy local grande farm houses or supervise his buddies clearing brush beneath the bridge to receive credits on his transportation card.

the drunks at the baseball game can walk go-cart scoot their way on the NEW auto-free path from Kaufman stadium to knuvkleheads@!

9 miles on any bike or treadmill at planet fitness, that as far as u allowed toooo goooo.