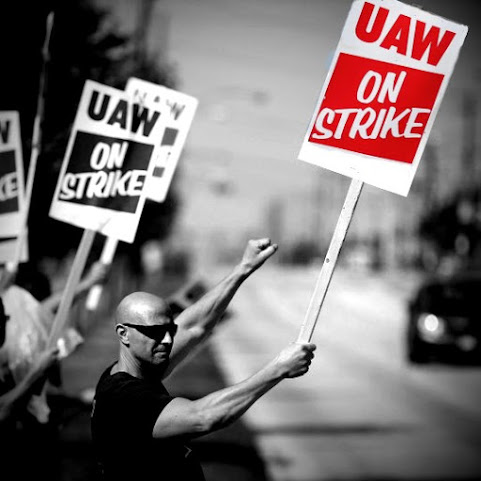 Right now GM & The White House are denying reports that Prez Trump will get in the game and settle the strike.

Our favorite reporting from a national perspective . . .

VICE: 'Nobody Wins in a Strike': Inside the Historic, Painful GM Walkout - "When push comes to shove, GM doesn’t give a f*ck if you’re a Republican or Democrat."

Accordingly, as promised HERE'S A LOOK AT THE START OF KANSAS CITY POLITICOS OFFERING THEIR SUPPORT FOR THE STRIKE which makes sense given that union cash is a big part of the local election game.

There are two General Motors plants in the region affected by the United Auto Workers' strike which began this week after talks went nowhere between the union and GM management: the Fairfax plant in Kansas City Kansas and the Wentzville plant just west of St. Louis.

50,000 UAW bothers and sisters entered in solidarity into a strike Monday including over 2,000 in Fairfax and 4,500 in Wentzville.

“What [the strike] means for our members and a lot of Missouri workers is the UAW decided to draw a line in the sand for better wages and benefits for our members,” Glenn Kage, president of the Local 2250, told The Missouri Times. “General Motors is making record profits, and they can’t do so without the hard work of our members who have earned pay increases, earned better benefits, earned for our temporary workers to be converted to permanent workers, earned job protections.”

“General Motors opened a plant in Mexico. … What does that do for Missouri workers, that’s the question,” Kage said.

Over the weekend, the UAW Local 31 (which covers the Kansas City area) President said they've been working below what they should be to help the company get out of the hole.

GM was on the brink of bankruptcy a decade ago and had to be bailed out by the federal government. Employees said they were also part of the solution.

"It's common knowledge General Motors was in some trouble a few years back," said Clarence Brown, UAW Local 31 president.

"We gave up a lot to help them get back for they are, and we got to continue that to best help them get the position they are in now. We have not, as far as I'm concerned, received compensation for what we have done pulled them out that gutter."

Jackson County Democrats have long stood with labor unions and working families especially when it comes to collective bargaining and earning a living wage. We know the Republican party in Missouri have served as a tool for union busting owners and many in their legislative caucus, along with their wealthy donors, can't want for the next opportunity to make Missouri a Right to Work state again.
#######

There was an earlier commenter this morning who said the strike wouldn't go one week. I certainly hope that's correct. Do not want to see people suffer of this and they deserve to have better healthcare. Think about it, single payer would solve a lot of these problems and make this country more profitable.

You wouldn't be working at all if it weren't for Trump! YOU STUPID PINKO TRAITOR.

So Jackson County democrats are not the least bit worried that GM employees living in the county with illegal tax assessments will not be able to pay their higher taxes? These people need to get back to work so they can pay Frank White his duckets.

Get off your phone and flip those burgers, 3:52.

Wonder if the replacement robots will look like humans. Eagerly awaiting.

Democrats used to care about unions and working folks. Now, it's become an extreme left wing party that is more interested in the views of the liberal elite on the coasts and on college campuses. They only care
about union workers at election time.

For those with short memories, GM planned to build a new plant in Mexico but after criticism by Trump, they canceled that plant and decided to build in Michigan instead.

For those with short memories, union members are crybaby faggot drug addicts, especially the UAW.

^^^and yet your kids are still crybaby faggots too so....

When it went all in on open borders, the Jackson County Democrats walked away from supporting labor unions.

Just so all of you know - Unions vote Democrate, so next time you see a fire truck, or a FF at a QT, or when they are crusing for underage pussy on the plaza - let them know their hero status isnt what it used to be.

I don't think this is as much of a partisan issue as it used to be.

I get it that the UAW workers make bank and that cars are made in pieces everywhere, but union support for middle class union labor, from middle class voters makes sense to me.

ANY union at all, that can undermine the strangle hold that Wall Street International Globalist Companies have over working stiffs should be supported.

Wall Street's goals are diametrically opposed to the health of Main Street. A compromise would be great here, I hope it comes soon. In the meantime. the losers in Congress, should pass the USMCA and stop the ridiculous, political grand standing in hopes of impeachment.

The U.S. multinationals on Wall Street do not want the USMCA to pass because they don’t want President Trump to have leverage that allows him to continue the fight against China and the EU. It is a simple dynamic, USMCA ratification makes the Wall Street prior investments in China worth less.

Too bad if it doesn't pass, it would be great for America, but Pelosi own't give Trump anything, even if it hurts Americans.

Bilateral deals with ASEAN partner nations and simultaneous crushing tariffs on China deals with one problem. China’s removal of U.S. wealth and jobs is halted.
The construct of the USMCA, and country of origin for source material and strict enforcement mechanisms, deals with the second problem: NAFTA’s fatal flaw.
An reciprocal and barrier removing agreement between the U.S. and U.K; which can open a tariff free trade highway between North America and Europe; creates the leverage for Trump (benefit for Johnson) that begins to deal with the EU problem.

In essence Trump is engaged in a process of: (a) repatriating wealth (trade policy); (b) blocking exfiltration of wealth (main street policy); (c) creating new and modern economic alliances based on reciprocity (bilateral deals); and (d) dismantling the post WWII Marshall plan of global trade and one-way tariffs (de-globalization).

In all of these efforts U.S. multinational corporations, big companies on Wall St, are heavily opposed to President Trump because they have invested in those overseas operations. Those companies facilitated the loss of U.S. manufacturing jobs.

^^^ Yep It is a political strategy and calculation for Speaker Nancy Pelosi, and Minority Leader Chuck Schumer to attempt to sink the U.S. Main Street economy. Weakening Trump’s China confrontation; blocking the USMCA; and impeding a trade agreement between the U.S. and U.K. are part of that calculation.

This is why we are seeing Wall Street, and the media pundits therein, openly cheering for an economic recession for exactly the same purpose.

The aligned interests of Wall Street, media pundits and Democrats are all contingent upon harming the U.S. economy. That is how severely ideological modern democrats are.

The democrats are willing to destroy Main Street in order to retain power.

And libs on main street are still ignorantly supporting them, weird.

WHAT ABOUT THOSE UNION COAL JOBS THE DEMOLIARS DID AWAY WITH

^^and yet none of that is true whatsoever. Weird.