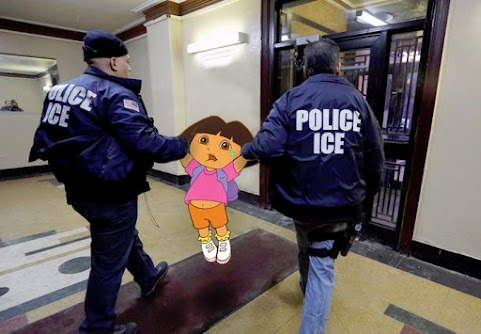 A teachable moment as youngsters are forced to learn about politics, culture war and submission at gunpoint at an even younger age . . . Checkit:

Last month, the U.S. Court of Appeals for the 8th Circuit grappled with the question of how to balance the rights of students with the need for security and order in schools. In a case arising from a Kansas City public school, a police officer handcuffed a 7-year-old black boy and escorted him to the principal’s office for becoming upset after a classmate “incessantly teased” him. The boy remained handcuffed until his father arrived at school 20 minutes later.

Bringing in police officers to handcuff second-graders simply because they are upset or defiant is not good educational policy. But according to the 8th Circuit, it’s legal.

Buckle up buttercup it's a cruel word. Not every thing is a law suit.

Don't let your "youngsters" grow up to be irresponsible thugs.
Worth a try!

An excellent learning experience which will become useful in adolescence and adulthood.

Teach’em young how to be safely handcuffed, these future black “angels of death” need to learn young what not to do while handcuffed that they can break their bones trying to get out of them while trying to escape! Hahahahaha!

Old people. SMH. Maybe tonight's the night you get to go into the light! Fingers crossed!

7:24 stupid people, SMH. Maybe tonight's the night you get to go into the light! Fingers crossed!

Oppression? No, this is as close to in vivo job training as the little welfare anchors and future felons are likely to get.

Seems to me the "incessant teaser" should have been the one in custody... you know, anti bullying and all.

@8:28, I would doubt the child was teased at all. This is just a way to excuse thug behavior. Yeah, a third grader can readily be controlled by an adult, but then the parents screech about that too. The responsible thing to do when you have a thug-out event is simply cuff the child and take them to the office. The surprising line here is when his father arrived 20 minutes later.

School Public Safety did that, not a "Police Officer." Geeez KC Star, lets get hysterical.

Give the teachers Tazers and they wouldn't need to bother the police.

My question is, was the teacher white? Was the principal white, what is the racial make up of the staff? Sounds like the building itself is not up to par. For the police to be called in? To do the principals job, assistant principal, teacher, teacher assistant, school counselor, he'll even the secretary...they do a lot. All that staff and other teachers to help diffuse the situation says there is no harmony. Among staff, in the building, lack of leadership, if known bullying is allowed in one classroom, you know it is rampant in varied classroom. That is inexperience, bias, and everyone, including a judge says it is okay to handcuff a victim, to be victimized again, a judge says it is great to handcuff seven year olds. Black children yes, they are future cases, white children better get those handcuffs, well, we know they would Latino children and do, these are the times. This will make news and then people will forget about it. Somebody got in an ear to stop future lawsuits. They must do this in charter schools and it get hushed up. Wow, it's fine to handcuff bullied, terrified, victimized, seven year old children if they are African American. Call the Police to do the teacher's job and the principal's. The parent must have gone to said principal for help for their child. Nothing happened. That building is out of control and folks should be fired. Period. Get legal action against said parties individually, seems like they want to go back to separate but equal. This opens the door for Bedell to leave with a big old check too. Not everyone cares about your child. Not even the law of the land. Leadership says a great deal and influences a majority. Save that child. Take them to a better school that has an established program, get therapy for him, involve him in activities to raise his self confidence, and above all, show, give this child love and support. Maybe he will grow up to be a Supreme Court Justice and make all receive true justice. Shame on all of you. Stop pointing the finger and help this child.

The cops should be fired. Anyone who lacks the upper-body strength to secure a 7 year old without handcuffs is physically unfit to be a police officer.

also, anyone who uses handcuffs on a 7 year old is mentally unfit.

@12:41 The Principal was black female, the officer was black male, the child was black male. The teacher was white female. The Principal made the decision to keep the handcuffs on after previous incidents with the student destroying items on her desk. The parents live near the school. The father has 6 kids by three different women. the parents were looking for a payday not justice.

@ 2:05 so you would rather the officer keep his hands on the kid,force his hands down to his side? sit on him? what? Handcuffs are not a bad thing if someone is a danger to themselves or others or destroying property.

This was a school security officer not police.

Sorry Phat Phil, you lose again. The courts agree, it’s just prepping him for his first arrest in another year or two.

Legal genius @2:05, school personnel shouldn't have to coddle the "trouble" kids who disrupt the education of the other students. So, Sister Mary SlapYoFace, Mama GroundYoButtGood, and Daddy BeatYoAssToNoEnd are today's popos, prison guards, probation officers, and courts!!!

School staff aren't supposed to waste time and risk escalating increased harm to all involved by being party to unnecessary debates and prolonged negotiations with misbehaving brats. In other words, the junior thugsters aren't getting away with screaming, cussing, and violence like their mamas and her series of babydaddies have modeled for them.

So I suppose its okay to taser and pepper spray children now? how about launching tear gas into the classroom?

If they’re bad enough, why not? I’ve watched some hidden videos and it’s atrocious the way many kids misbehave and treat their teachers today. Like everyone, I had a few teachers I didn’t like, but if I had acted out or told them to “f off” I would have been suspended or expelled and then caught hell at home after school.

Tase the little mofo. He might as well get use to it.

Well, I think handcuffing that 7 yo, no matter how loud he is, borders on child abuse. I don't know the answer. Can we still suspend/expel troublemakers?
Anything they do, the school will be persecuted for their actions.