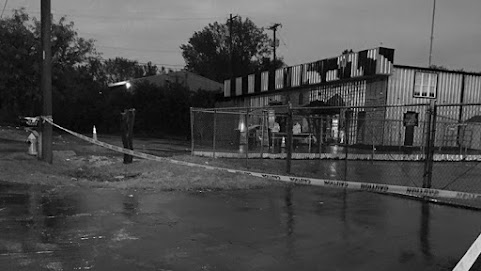 The climax of the Kansas City weekend was the report of an EPIC GUN FIGHT and quintuple shooting near an unincorporated Jackson County spot dedicated to the "lifestyle" of sexual sharing, swapping and somewhat scandalous good times.

However, in the aftermath, a notable social media ruckus erupted after Sheriff Forté shared a few public post photos of deputies grinning near the scene of the crime. To be fair, the Sheriff didn't seem to be joking and noted the professionalism and dedicatation of his staff in the narrative of the pix.

As always, local Internets denizens were offended and expressed their displeasure at lack of decorum from the County top cop . . .

The reply for the JaxCo Sheriff:

"I appreciate and admire what law enforcement has to endure day after day. Often times being judged and criticized by some who have no idea of the stress associated with being on heightened alert both while on-duty and off-duty. No one was seriously injured or killed during this incident. Had someone been killed or seriously injured, out of respect we wouldn’t smile for pictures.

"I’m not concerned with comments from critics. Everyone pictured and others in the LE community would sacrifice their life to save a life. They have earned the right to smile. I will continue to show my appreciation for their commitment to our community. LE officials deserve to be commended. I encourage those who haven’t participated in a ride-a-long in your jurisdiction to do so.

Was is appropriate to feature smiling deputies after a sex club shooting???

It was just a retarded post. Not disrespectful though.

He still billing the taxpayers for overtime?

So what the fuck happened...?

Forte's the ringmaster for that clown show over there.

"I appreciate and admire what law enforcement has to endure day after day. Often times being judged and criticized by some who have no idea of the stress associated with being on heightened alert both while on-duty and off-duty."

By that definition, everybody's job is stressful... find me cashier anywhere USA who isnt faced with the same day in/out drudgery. Find me a corporate worker who isnt dealing with the exact same shit. It fucking sucks dealing with the public but people in general. Stop puffing. Find another job with less stress and minutia. Police dont protect or serve... they just show up in the aftermath. Yes, government workers have to earn their keep like everybody else.

^^ Back to the basement dummy. Gramps is coming over this afternoon without his teeth!

If cops weren't such arrogant prick it would help.

Much as I hate to say I agree with Forte I do have to agree with what he says for once. I mean come on isn't it rather funny that a place thats suppose to be about love,sex and having a great time ends the day with a huge shootout? If Jay Leno had done a monologue on it all these haters would have been insanely laughing their asses off. Police, Fire and EMS personnel see all the bad things of life almost every day and and laughing is a great stress reliever as anyone in uniform could tell you. What the officers in question were smiling or laughing at could be totally unrelated to the incident at hand.

A Wife-swapping Club for a pack of Coons?
Who could keep a straight face?
Probably it was a mass suicide event, and everyone just kept missing.

Jack & Tina (aka Nicki) are you ok? I think you were going to the club that night?

We understand the stress your troops are going through Mr Forte. 40 percent of them are wife beaters.

Bivixencam lady where are you? We need you now, Pam!