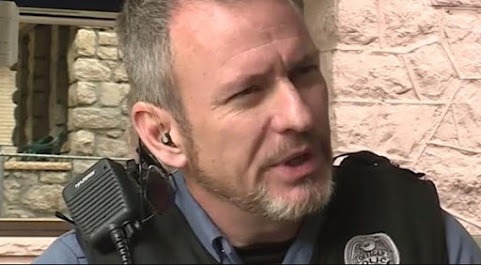 And the local news organization with the best police connections calls out officer in question on the record . . .

KCPD officials are not naming the officer at this time. However, KCTV5 News has confirmed through multiple sources that the officer on leave is Officer Kelly Sapp.

Remember that a couple of years ago the officer walked to Jeff City to push for more solutions on rising violence in KC.

"Police originally said an off-duty KCPD officer was patrolling a shopping center near 63rd Street and Blue Ridge around 1 a.m. when the officer said he heard noises along the property's tree line.The officer said when he approached on foot, he heard multiple gunshots coming from a wooded area. The officer said he retreated for cover and called for assistance, which is when he discovered he had been shot in the chest, according to a statement from Capt. Tim Hernandez. A suspect was never located, and the bullet did not penetrate the officer's vest.

Police have continued to investigate the incident and now say the officer's account was not an accurate report of events.

In a new statement released Monday, a police spokesman said the department is no longer investigating the incident as an aggravated assault against a police officer."

Fox4: Officer suspended after KCPD says he didn’t give an ‘accurate report’ of being shot

KSHB: KCPD officer lied about being shot in the chest while off-duty

Good cop in a bad situation.

Held to a higher standard and that is appropriate. Wish him the best, KCPD needs more like him.

Welcome to the Insane Asylum - Keep it Frosty

Accuracy is important, so is taking the side of police. Looks to me like a political power shift in the making.

KCPD has a lot of misconduct going on in the ranks. They cover it up well.

Okay so who shot him? It took this long to see there were maybe no bullet holes in his outerwear or vest? Why release any news if it's going to be so vague as to what really happened?

Could have been anything.....but you lie in Law Enforcement and you're done.......unless you are a higher up.

The standards aren't that high in Law Enforcement but if Sapp got caught sleeping with another mans wife I understand why he would want to hide the issue.

Still not as bad as the stuff the fire department is doing.

You trusts any of the jackbooted thugs anymore try driving through Lee’s summit at 2:00 in the morning they’ll invent probable cause to pull you over than the first fucking thing out of their mouths is”how much you had to drink tonight? All done in hopes of making a buck for themselves to further “ public safety”. The cops all know there’s no money in serving and protecting only in usurping and harassing and corruption no more Andy of Mayberry just a bunch of shaved bald jackbooted thugs with a chip on their shoulder who view the citizens as their personal piggy bank